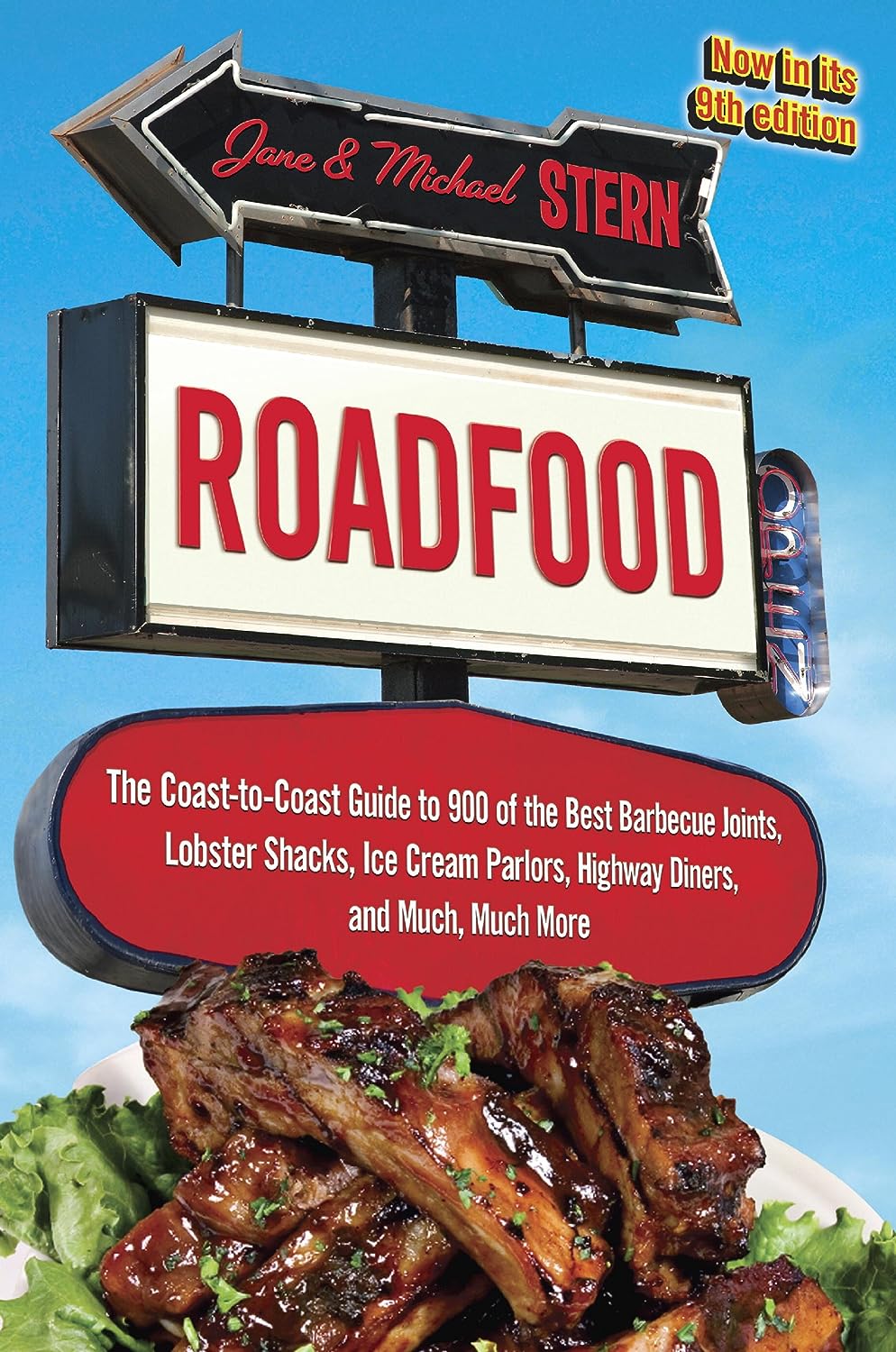 Roadfood: The Coast-to-Coast Guide to 900 of the Best Barbecue Joints, Lobster Shacks, Ice Cream Parlors, Highway Diners, and Much, Much More, now in its 9th edition

About the Book:
First published in 1977, the original Roadfood became an instant classic. James Beard said, "This is a book that you should carry with you, no matter where you are going in these United States. It's a treasure house of information."

Now this indispensable guide is back, in an even bigger and better edition, covering 500 of the country's best local eateries from Maine to California. With more than 250 completely new listings and thorough updates of old favorites, the new Roadfood offers an extended tour of the most affordable, most enjoyable dining options along America's highways and back roads.

Filled with enticing alternatives for chain-weary-travelers, Roadfood provides descriptions of and directions to (complete with regional maps) the best lobster shacks on the East Coast; the ultimate barbecue joints down South; the most indulgent steak houses in the Midwest; and dozens of top-notch diners, hotdog stands, ice-cream parlors, and uniquely regional finds in between. Each entry delves into the folkways of a restaurant's locale as well as the dining experience itself, and each is written in the Sterns' entertaining and colorful style. A cornucopia for road warriors and armchair epicures alike, Roadfood is a road map to some of the tastiest treasures in the United States.

My Comments:
There are basically two aspects to this book.  First, it lists what the authors consider to be "900 of the best barbecue joints, lobster shacks, ice cream parlors, highway diners and much, much more".  Second, it reviews those restaurants so that potential patrons know what to expect.  In coming up with this review, I looked at the listed restaurants in the New Orleans area to see if I thought the ones listed belonged on such a list. Of the fifteen restaurants in the New Orleans area, all are places I've heard of, though there was one (Domalise's Po-Boys) that I only know of because my husband mentioned selling to them.   I've patronized nine of them.  For those in the know, they range for Galatoire's to Rocky and Carlos and from Morning Call to Hansen's SnoBliz.  In general the places I know of are good, though honestly many wouldn't make any "best of" list  for me.  They are good neighborhood places that aren't, in my opinion, unlike many others in the area.  Of course everyone is entitled to his/her own opinion but I think Galatoire's is highly overrated.  It is the place to see and be seen but it is a high-end restaurant that is noisy and crowded, not elegant and understated.  If I'm going to spend that kind of money, I want elegance and interesting food, not old standards and crowded noisy rooms.

Next, I polled a bunch of people I knew from all over the country about the listed restaurants in their areas.  I asked if they had heard of them, if they had eaten there and if they liked it.  In general, people had heard of the places mentioned, and generally said they were good.  They also gave me some comments:

Ruth Ann (St. Louis Missouri):  Our parish gets their fried chicken from Hodak's for our picnics, Everybody loves Ted Drews ice cream, it is THE place to treat out of towners. so so to me.  My husband says Crown Candy Kitchen is a very good place often with lines outside waiting to eat, but Goody Goody Diner is a place to stay away from.

Janette (used to travel a lot)  Cattlemen's in Oklahoma City is  pricey. It is also one of the best steaks I have ever had.  Garrett's popcorn in Chicago- Love it. I NEVER pay for any popcorn except theirs.

Toni (Brooklyn NY): Katz' deli in the city is on it...omg....I love that place!  Best Reuben sandwich ever!

Christie (moved a lot):  WI - Kopps Custard is legendary. Delicious and a must visit if in the area.  PA - Center City Pretzel Co. is good. I would agree if you like that style of pretzel. I like them but don't love them. Genos - Philly - Legendary and worth the trip for cheesesteak. Pat's King of Steaks - Philly - Lengendary. Worth the trip. It is a huge rivalry between Pat's and Geno's as to who has the better cheesesteak

Aimee:   Okay, I didn't see any on the CT list that I haven't liked.

Linda (Jackson MS)  I could write a novel about the Elite! My best friend and I were pregnant at the same time and we ate enough off their famous rolls one day at lunch that they finally quit bringing them to us! I've had enchiladas with the governor there and a multitude of meals in between. It's a great place!

Kym (MS)  The Elite in Jackson is an old school, upscale, soul food kind of place.

Kym (Oklahoma) I will say, based on the Tulsa restaurants, that the book limits it stops to eateries ON the road trip routes. Just about every Tulsa restaurant on the list is right along Route 66. That's a shame because if you veer off of 66 for just a three or four minute drive, you can find some amazing places to eat. Ike's Chili is DEFINITELY my favorite on this list. Ike's on 11th (Route 66) has a definite diner feel, and the chili is amazing. Ike's is real chili (no beans), but you can add beans. Put it over spaghetti, and have a "three way." The menu also includes burgers and a number of dishes that highlight their chili (Frito Pie, Coney Dog with Chili, Chili Mac). The atmosphere is fun, with lots of historic photos of Tulsa and the original chili pot on display. It's also budget friendly and draws a varied clientele.

Carrie:  I've heard of Wintzell's.[Mobile AL]  Everyone has. Most people tell me it's really overrated.

The book also has a website so you can check out places in your neighborhood, and leave opinions about places you have eaten. Their focus is on local food served in places frequented by locals.  I've enjoyed reading the book and discussing the restaurants with people all over the country.  Now I'm ready to hit the road and try some.  Grade:  A.

I'd like to thank the publisher for making a review copy available via their Blogging for Books program.  I was not obligated to write a positive review.