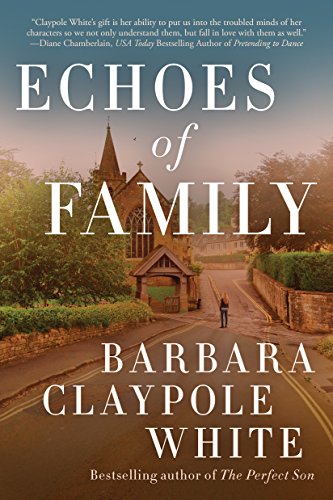 Marianne Stokes fled England at seventeen, spiraling into the manic depression that would become her shadow. She left behind secrets, memories, and tragedy: one teen dead, and her first love, Gabriel, badly injured. Three decades later she’s finally found peace in the North Carolina recording studio she runs with her husband, Darius, and her almost-daughter, Jade…until another fatality propels her back across the ocean to confront the long-buried past.

In her picturesque childhood village, the first person she meets is the last person she wants to see again: Gabriel. Now the village vicar, he takes her in without question, and ripples of what if reverberate through both their hearts. As Marianne’s mind unravels, Jade and Darius track her down. Tempers clash when everyone tries to help, but only by finding the courage to face her illness can Marianne heal herself and her offbeat family.

Barbara Claypole White's Echoes of Family explores the intersection of mental illness, guilt and secrets.  Marianne suffers from manic depression, which means that in an unmedicated state she swings between extreme energy and high emotion on the one hand and suicidal, do-nothing depression on the other.  On medication she functions well, most of the time.

Her husband loves her dearly, even if he is an (ex) alcoholic, music producer with tattoos.  He'll do anything for her.  She has a "daughter", a young woman who was "thrown away" by her family and taken in my Marianne.  The three of them run a small but successful recording studio which also provides opportunities for other "thrown away" girls.  Everything is fine until one day Marianne is in an accident and it reminds her of one she was in as a teen--the accident that brought forth her mental illness in all its glory (though there had been signs of it earlier).

Marianne decides she needs to return to her childhood home in England, alone, to deal with the past.  When she gets there, she meets her first love, who is now the parish vicar.  He takes her in and though the two of them were once very close, they are each keeping secrets from the other.  Neither has been able to completely let go of what happened that tragic night.

Before long Marianne's husband and her "daughter" follow her to England and try to help her.  Watching her husband and her first love interact was interesting to say the least.

I don't pretend to know much about mental illness but I loved the way Barbara Claypole White gave Marianne a real personality and life beyond being insane.  Marianne was a person with a mental illness, not a mentally ill person (the person was primary, the mental illness secondary).

I'd like to thank the publisher for making a review copy available via NetGalley.  If you are a regular reader, you know not many books get A's from me, but this one does.