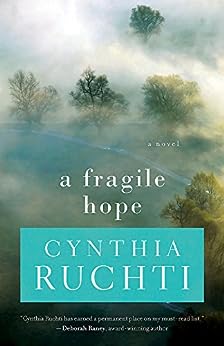 Josiah Chamberlain's life's work revolves around repairing other people's marriages. When his own is threatened by his wife's unexplained distance, and then threatened further when she's unexpectedly plunged into an unending fog, Josiah finds his expertise, quick wit and clever quips are no match for a relationship that is clearly broken.

Feeling betrayed, confused, and ill-equipped for a crisis this crippling, he reexamines everything he knows about the fragility of hope and the strength of his faith and love. Love seems to have failed him. Will what’s left of his faith fail him, too? Or will it be the one thing that holds him together and sears through the impenetrable wall that separates them?

Josiah is a famous writer of books about relationships, but his primary relationship, his marriage, is very broken, and he doesn't even realize it.  One night his wife has had enough, and she is found in a coma in a car with her best friend's husband, who is dead.  Josiah has reason to believe she has been unfaithful and is, of course, hurt by this.  It takes him a long time to realize that he is the one who has been unfaithful--no he has never been with another woman but he hasn't given himself to his wife in a long time.

Josiah's wife is in a coma for a long time and there are serious doubts that she will ever recover.  In the end, she does and so does their marriage.  In realizing what he has to lose, Josiah learns how hard it is to forgive, and how necessary it is.

The book is Christian fiction, but Josiah isn't the most religious guy on the planet.  He and his wife belong to a church and the church members help them through the  ordeal but there are no sermons in the book and faith doesn't solve all the problems in the world.

I like Cynthia Ruchti's writing and I really enjoyed the book  Maybe the happily ever after was a tad unrealistic, but I'd much rather be left smiling at the end of a book than crying.  Grade: B+

Thanks to the publisher for making a review copy available via NetGalley.