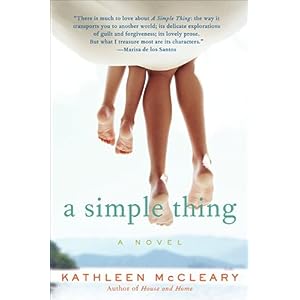 A Simple Thing: A Novel


For Susannah Delaney, the answers lie thousands of miles away, off the northwest corner of Washington state. When Susannah discovers her young son is being bullied and her adolescent daughter is spinning out of control, she moves them to remote Sounder Island in the San Juans to live off the grid for a year. Susannah hopes to save her children from the risks they've encountered at home, and to come to terms with her own haunted past. But the move threatens her marriage to the man she's loved since childhood, and her very sense of self.


For Betty Pavalak, who first moved to Sounder to save her own troubled marriage, the island has been a haven for more than fifty years. But Betty also knows the guilt of living with choices she made long ago and actions that cannot be undone.The unlikely friendship between Susannah and Betty ignites a journey of self-discovery for both women that brings them both home to what they love most. A SIMPLE THING moves beyond friendship, children, and marriages to look deeply into what it means to love and forgive--yourself.


My Comments:
If you read my blog regularly, you'll note that I read a lot of Christian fiction.  That's partly by choice and partly by happenstance--yes I like it but I've also managed to get myself on the mailing lists of more than a few publicists who handle Christian fiction so I'm offered a lot of review copies.  While different books and different authors have different amounts of religion in their books and handle it in ways ranging from sermons dressed as stories to relatively subtle product placement of God, certain themes are prevalent and with few exceptions, characters are good or bad, and the good believe in God and/or Jesus.  A Simple Thing is not Christian fiction though its main theme--forgiveness--is frequently used in Christian fiction.  Its characters are not so black and white and most admit to having no faith.

Kathleen McCleary's writing is wonderful.  Her descriptive writing is top-notch.  Her characters are multi-faceted and very human.  Chapters alternate between Susannah's story and Betty's and are dated to let us know when the action occurred.  As readers we see what brought these women to where they are today. While it is very much the story of these two women, A Simple Thing explores how the men in their lives have very much made them the people they are.

As I said earlier, this isn't Christian fiction so there is no salvation scene at the end however there is a scene of forgiveness and acceptance and part of that scene surprised me given the professed lack of religion of the characters, and yet it comported completely with my moral beliefs on life issues.  It is part of the reason I'm giving this book an A, but by no means the only one.

I'd like to thank the publisher for making a review copy available via Edelweiss Galleys.  I was not obligated to write a positive review, but I'm please to do so with this book.
Posted by RAnn at 12:20 AM