The Cowboy and the Princess: My Review 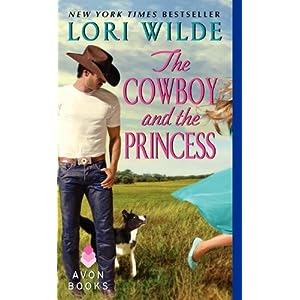 The Cowboy and the Princess

Welcome back to Jubilee, Texas, where New York Times bestselling author Lori Wilde romantically pairs a beautifully princess with Texas royalty: a rugged, totally hot, real-live cowboy! Wilde’s Jubilee novels celebrate homespun, small-town love—a treat for readers of the contemporary romance fiction of Sherryl Woods, Susan Wiggs and Susan Mallery—and her sexy cowboy heroes are sure to make Linda Lael Miller fans swoon. Nobody can resist these handsome, muscular, outdoorsy American icons, especially not the royal runaway bride in The Cowboy and the Princess, who unexpectedly finds her heart’s true desire in blue jeans smack-dab in the middle of America’s Southwest. You won’t want to miss the fireworks when these two worlds romantically collide!

My Comments:
Most romance novels cannot be accused of excessive realism, and Lori Wilde's The Cowboy and the Princess  is no exception; as a matter of fact is is more unrealistic than most.  He is a loner, but a man with lots of friends who love him.  He doesn't want to settle down and doesn't think he is worthy of being loved.  However, he has a way with horses.  She's a princess from some small European country.  She is supposed to marry the prince of another small European country in six weeks.  It is a political match, not a love one, and she wants just one chance to be "normal" before her wedding.  Her chance comes when the daughter of the ex-President of the US gets married.  She goes to the compound to attend the wedding, and, with the help of the  President's daughter, slips away from her bodyguards.  She is on the highway hitchhiking when he picks her up.  He takes her to a small town in Texas and she settles in for six weeks, taking a job in the store of a friend of his--oh, and he and she decide to have a fling.  Each tells the other that s/he doesn't want anything more than a short fling, but along the way....  In the end they get their happily ever after but the ending is even more far-fetched than the beginning.

Despite the far-fetched beginning and ending the middle is a really good story with strong characters.  Anne has spent her whole life wanting to do what other kids do--get dirty, go to carnivals, eat concession stand food, but she was a princess and had to act like one, all the time.  It must have been fun for Brady to see the wonder in her eyes as she experience all these new things in Texas.  He was obviously curious about where she came from but he gave her the space she needed.  It takes them a while, but eventually they are intimate before marriage, and while this is not the most explicit book I've ever read, I'd by no means put it in the "clean" romance category.

I'd like to thank the publisher for making a review copy available via Edelweiss.  I was not obligated to write a positive review.  Grade:  B


My Review of The Welcome Home Garden Club
My Review  of All of Me.

Email ThisBlogThis!Share to TwitterShare to FacebookShare to Pinterest
Labels: 2012 Book Review, Grade: B, Lori Wilde, The Cowboy and the Princess