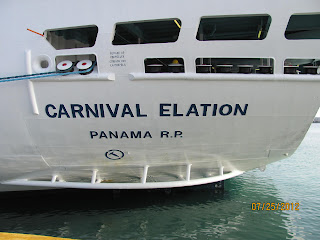 We just took a five day cruise on the Carnival Elation.  I thought I'd give you all my two cents worth about this cruise.  To comply with FTC disclosure requirements, I'll tell you that I paid for this cruise with my own money, though if any cruise ship company wants to offer me a complementary review cruise, I'll be glad to accept.

Overall:  We had a great time and overall I'd give the experience a B+.

Cost/Value:  One thing that "sold" me on the idea of a cruise was that I had heard it was pay one price,  get a whole vacation.  Personally, I found that the tickets were just the beginning.  We paid about $1700 for four people in one room.  Not too bad for five days of room and board, and transportation to ports.  However, we were leaving my son home (his choice) and so we decided to get passports so we could fly home from Mexico, if necessary.  They were over $100 each.  We had to get to the cruise ship terminal and my son isn't comfortable driving that far from home so we took a cab both ways (we would have saved money by driving and parking--live and learn).  Once on board, we found abundant opportunity to spend money.  Soft drinks were $2.00 each or you could get a sticker allowing unlimited drinks for $6.00/day.  I'm a Diet Coke addict so I got the sticker and surprisingly, just about broke even.  You have to get the drinks from a bar and I often wasn't close to one.  Also, the drinks were from cans, not fountains, and some tasted old.  While regular coffee was included, coffee shop coffees were extra.  Finally alcoholic beverages were extra as well. We aren't big drinkers but lots of folks on board obviously were,  and I would hate to pay their bar tab.  Our other big expense was shore excursions.  We paid over $300 for our excursion to the ruins on Wednesday and over $100 on Thursday.  Another expense to anticipate is a 15% tip on your total shipboard bill.  In short, our trip ended up costing  us about twice the "sticker price"--we we didn't run up a big bar tab.  I don't quite know how to "grade" this item as the "extras" were disclosed and chosen, but still....

Service:  The staff on the ship was great.  Service is their job and they do it well.  They are friendly, helpful, always there, and not in the way.  Our waiters knew our names and the night my eight year old ordered pizza, they gave it to her with a side of french fries.  Our cabin was straightened a couple of times a day.  When we ate at the buffet, we automatically picked up our tray and looked for a place to deposit our dirty dishes etc., but of course that wasn't our job.  My only complaint is that when we first got on board my daughter had a feminine emergency and I went looking for stuff for her.  I approached a staff member who was wearing a t-shirt that said "Just Ask" and was told that a store would be opening later that evening.  When I asked again what I could do, she directed me to the ladies room and said there were machines.  Luckily I had a couple of quarters on me (we had been told there was no reason to carry cash since everything was charged to our room); unfortunately I went to two different restrooms and the machines were empty.  I went back to the woman, who said she'd call housekeeping to fill the machines.  I'm sorry, but I have a hard time believing this was the first time this had happened and after running me around like that, she should have called someone to bring complimentary stuff to our stateroom.  Grade:  A- (because of that incident--otherwise would have been an A+)

Food:  When you say cruise, most people think of food, food and more food, and we certainly had that.  There were two main types of places.  The Lido deck had the buffet, grill, sandwich station, pizzeria, and Mongolian barbecue.  There were also two full service restaurants.  The food was plentiful and I'd describe it  as "not bad" but it wasn't all that great either.  The buffet had a salad bar which was pretty good.  Soft serve ice cream was available 24/7 and very popular.  The breakfast was about what you'd expect from a hotel complimentary continental breakfast, plus an omelet station.  They also had bacon, ham, eggs, and hot cereal along with pancakes and french toast.  There were different foods on the buffet every day.  Still, it was buffet food, not bad, not all that great either.  For supper we ate in the full-service restaurant.   We were served hot bread as soon as we sat down.  The menu had two sides--one that remained the same throughout the cruise and another than changed nightly.  A children's menu was also available.  You got a starter, an entree and a dessert.  Portion sizes seemed small compared to what I am used to seeing in restaurants, but they really were appropriate.  Here is what I ate:


In short, this stuff was banquet food.  It looked pretty and it wasn't bad--it just wasn't very good either.  Grade:  C.

Accommodations:  We had four people in one stateroom.  That was our choice.  It was cozy.  We had an inside stateroom, meaning we had no window.  With the lights off, our room was DARK.  The girls were in bunks that came down from the walls.  If I got up in the middle of the night, I had to duck under them.  The provided night light was too bright, we ended up improvising with the bathroom light.  The bathroom had a shower only; no tub.  The air conditioning worked too well, not only in our stateroom (we finally figured out how to turn it down by day four) but all over the ship.  I lived in my sweater.  The beds were very comfortable.  Grade:  B+

Shore Excursions:  We did one shore excursion through the ship, and one on our own.  The one through the ship was exactly as advertised.  We had a good time and the food was the best on the trip (basic Mexican but it did have some taste to it).  By the time we tipped the guide it was over $80.00/person for a five hour trip.  Since I would have no idea how to do about arranging a similar trip on our own, and since we have such limited time in port, I'd give the excursion an A.  In Cozumel I noticed that several of the ship-arranged excursions were to a local park, and Google gave me the admission rate.  I also know that Cozumel is tourist central, and some other folks we know recommended just getting a cab to the  park, so that's what we did.  We got cab fare, admission and lunch for about $40/person.  We had a great time both day so I'll give this area an A+.

Entertainment:  I'm not going to grade this area because  most of this stuff isn't my idea of a good time.  I hate comedians, and really don't want to sit and listen to bands.  They did  production shows three nights and  we went once, and I enjoyed it.  We went to the piano bar one night but it didn't hold a candle to Pat O'Briens.  I really enjoyed sitting on the deck and reading but they need more spots where the wind doesn't blow and the air conditioning doesn't freeze you out (though by the end of the cruise I had found several such places). They had game shows, shopping, an art auction and more.  If you wanted to go to stuff, they had stuff to go to.

Children's Activities:  Carnival offers Camp Carnival for kids under 12, Circle C for young teens and Club   O2 for older teens.  My eight  year old loved Camp Carnival and chose to spend most of her time there.  My teen looked at the Club O2 schedule and chose not to go.  Grade:  A.