The Midwife: My Review 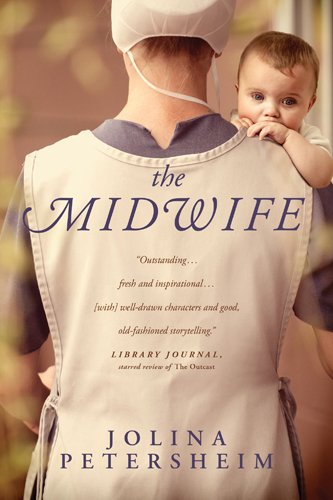 About the Book:
The Past -- Graduate student Beth Winslow was sure she was ready to navigate the challenges of becoming a surrogate. But when early tests indicate possible abnormalities with the baby, Beth is unprepared for the parents' decision to end the pregnancy -- and for the fierce love she feels for this unborn child. Desperate, she flees the city and seeks refuge at Hopen Haus, a home for unwed mothers deep in a Tennessee Mennonite community.

The Present -- As head midwife of Hopen Haus, Rhoda Mummau delivers babies with a confident though stoic ease. Except in rare moments, not even those who work alongside her would guess that each newborn cry, each starry-eyed glance from mother to child, nearly renders a fault through Rhoda's heart, reminding her of a past she has carefully concealed.

Past and present collide when a young woman named Amelia arrives in the sweeping countryside bearing secrets of her own. As Amelia's due date draws near, Rhoda must face her regrets and those she left behind in order for the healing power of love and forgiveness to set them all free.

My Comments:
The story is told in the first person with chapters told by different characters at different times.  Each is headed by the character's name and the date, so keeping track isn't that hard.  I actually liked the writing style and the way the story was told.  Unfortunately, by the end of the book the main thought running through my mind was "unbelievable" and not in a good way.  Too many things were interconnected, too many things that weren't likely to happen had to happen and did.  As an example, toward the end of the book a girl from this home for unwed mothers goes into labor unexpectedly.  The baby is in the footling breach position (coming out feet first) and these very experienced midwives don't know what to do.  It turns out that an unexpected visitor to the home that night trained as an obstetrician over twenty years ago (though he's never practiced) and he delivers the baby vaginally.  He knows better than those midwives how to do that?  I doubt it.  I won't spoil the story with all the interconnections but suffice to say I thought there were too many.

While the book really drew me in an I loved the writing, I've got to give this one a C+ for the total lack of credibility at the end.

Thanks to the publisher for providing a review copy via NetGalley.

Question for my readers?   Do you expect to be able to believe the story being told when you read a book?
Posted by RAnn at 10:42 PM