I don't know about you, but I find old maps fascinating. Resource Shelf has an article about old maps available on the web.
Posted by RAnn at 10:24 PM No comments:

We had a party this afternoon and invited a lot of old friends we haven't seen in a while (some since the last party like this that we threw two years ago). A lot of them were people we ran with when single. We all got married within a couple of years of each other and then had kids close to each other. We went to each other's birthday parties and used to get together monthy for the adults to visit and the kids to play. As the kids got older and went to different schools they started inviting friends to birthday parties and as the years went on, the monthly get togethers got harder and ended up dropped. Now the older kids are in high school and prefer being with their friends to being with the parents' friends' kids. However, most of the kids were dragged along with their parents today. It was nice to see them--and how they've grown, but whereas the kids used to all play with each other, today some sat with the adults, others zoned out with DS's and only a few played with each other.

Unfortunately, I'll be seeing a bunch of those people again tomorrow. I say unfortunately because we will be at a funeral. My son's Godfather lost his mother yesterday morning and the funeral is tomorrow. I told my sitter Friday not to stay open for me Monday, since I wasn't working; but that if she was open, I might leave the little one with her for a while and go shopping. She wasn't sure what other people's plans were, but she hadn't planned to be closed. I'll call her in the morning and see if she has kids. If she does, the little one will go there and I'll take the big ones to the funeral. If not, I'll probably leave them all home; but I think the big ones are old enough to start going to funerals of people they know, or who are close to those they do. I wouldn't pull them out of school to go, and I'm not taking the little one, but since we are all off, and the family has been close to us forever, I think they should go.
Posted by RAnn at 10:01 PM 2 comments:

If you've read this blog for any length of time, you will have realized that I love to read, but that my taste in books is anything but intellectual. I have to think all day long at work; I'm not really interested in reading books "for fun" that take a great deal of concentration and thought. I don't want to be depressed when a book is over, and I don't want to spend a lot of time reading any one book. Learning something is ok, but don't make me work too hard at it, and entertain me in the process.

One genre I've explored lately has been Christian fiction. Most of these books are written by women, and I'm sure the audience is mostly female as well. They are largely romance novels with chase heroines who discover faith as well as love. They are generally right on par, literature wise, with the paperback novels you buy in the grocery store or Wal-Mart, some of which (especially lately, those written by Debbie Macomber) are also on my reading list. This past weekend however, I found one that is a step above that. It was still an easy read with a happy ending, but the characters were well developed, the story compelling and while the end was never really in doubt, the story was anything but sacchrine sweet. The books was Redeeming Love by Francine Rivers. It was the Biblical book of Hosea re-written and set in Gold Rush California. In both books the hero follows God's command and takes a prostitute as his wife. In both books, the prostitute leaves him several times over, and he seeks her out and brings her back.

It was interesting to read this story of a woman who keeps fighting against all the good someone is trying to give her and who, much as she hates her old life, isn't ready to give it all up. How much do I fight against what is good for me, what God wants for me?
Posted by RAnn at 9:52 PM 1 comment: 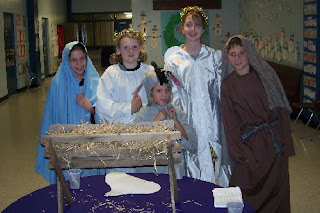 Last year I blogged that I was disappointed that our parish no longer did Christmas pagents. We got a new DRE this year, and the pagents, while changed, are back. Our pastor wants us to celebrate Advent, not Christmas, during Advent, so that does limit us somewhat, but our new DRE had the kids do a Posada during the last religion class. This is a Hispanic tradition during which people pretending to be Mary and Joseph go from place to place knocking on doors, and being turned away, until the end when they are let in. While I think the execution could be improved (they had a hundred or so people walking from place to place on the church grounds and with the exception of a few, they couldn't see or hear Mary, Joseph or the people turning them away) I'm glad they chose to do something--especially since my daughter was picked to be Mary.
Posted by RAnn at 9:33 PM 1 comment: