Review: As Bright As Heaven 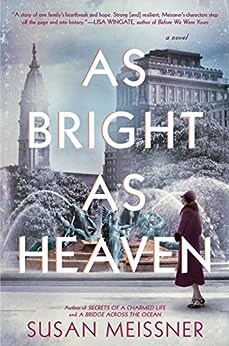 As Bright As Heaven

In 1918, Philadelphia was a city teeming with promise. Even as its young men went off to fight in the Great War, there were opportunities for a fresh start on its cobblestone streets. Into this bustling town, came Pauline Bright and her husband, filled with hope that they could now give their three daughters--Evelyn, Maggie, and Willa--a chance at a better life.

But just months after they arrive, the Spanish Flu reaches the shores of America. As the pandemic claims more than twelve thousand victims in their adopted city, they find their lives left with a world that looks nothing like the one they knew. But even as they lose loved ones, they take in a baby orphaned by the disease who becomes their single source of hope. Amidst the tragedy and challenges, they learn what they cannot live without--and what they are willing to do about it.

As Bright as Heaven is the compelling story of a mother and her daughters who find themselves in a harsh world not of their making, which will either crush their resolve to survive or purify it.

I like happy feel-good reads, and this isn't one.  Yes, it ends with joy, and hope, and vision of the future, but death is the reason for much of the book, and for that reason it took me a while to read. No, it isn't a difficult read, it's just that my mind is mush and sometimes it takes work to get beyond a romance novel lately.

I've read a lot of books about WWII, but this is one of the few set during WWI that I've read. 1918 was not only the year of WWI, it was also the year of the flu epidemic; both play a role in the story, but the flu in a much more powerful way--and some quick research I did showed that more people died of the flu than from the war.

What I've always considered to be signature of Susan Meissner's writing is an artifact of some sort linking a character in today's world to a character in the past.  That is lacking in this book; it is pure historical fiction with no modern characters or subplot.  Also, may of Meissner's early books were Christian fiction, though generally on the milder end of the spectrum; this is general market women's fiction.

The story starts with Pauline's youngest child dying and Pauline never completely emotionally recovering from that.  It's funny, we know in our heads that babies died in those days, and that it wasn't uncommon for people we consider young today to die, but how often do we put ourselves in the shoes of those young mothers whose babies didn't survive infancy?  I've "always" known that my mother had an older sister--though I've never thought of her as such--she was nothing to me but a stone in the graveyard.  When I was pregnant with my first child, I threatened to miscarry and at that point I wondered how my grandmother had felt when her baby died.  Years later for some reason my mom told me that my grandmother became depressed when she went through menopause and that my grandfather had asked my mom, who was on her own by that time, to come home for a while to cheer her mom. My mom said that my grandfather mentioned that my grandmother had been like that after they lost the baby, and that he understood that, but couldn't  understand why she was so upset over something that everyone knew would happen at about that age.

Back to the book, Pauline and her family move to Philadelphia to live/work in a funeral parlor and caring for the dead Pauline begins to heal.

The story follows the family through the flu epidemic and then the end of WWI and to the beginning of Prohibition. The world was changing, and so was the family.  One of the daughters ends up in medical school and working as a psychiatrist.

Susan Meissner does a great job of capturing the era, the death, the hope, the change and despite the fact that it isn't all smiles and rainbows, I recommend the book highly.  Grade:  A.

Thanks to the publisher for providing a review copy via NetGalley.

Email ThisBlogThis!Share to TwitterShare to FacebookShare to Pinterest
Labels: 2018 Book Review, As Bright As Heaven, Grade: A, Susan Meissner 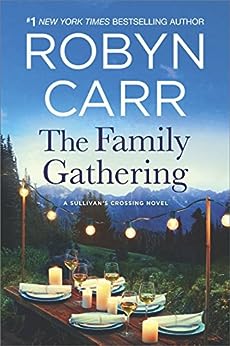 Having left the military, Dakota Jones is at a crossroads in his life. With his elder brother and youngest sister happily settled in Sullivan’s Crossing, he shows up hoping to clear his head before moving on to his next adventure. But, like every visitor to the Crossing, he’s immediately drawn to the down-to-earth people and the seemingly simple way of life.

Dakota is unprepared for how quickly things get complicated. As a newcomer, he is on everyone’s radar—especially the single women in town. While he enjoys the attention at first, he’s really only attracted to the one woman who isn’t interested. And spending quality time with his siblings is eye-opening. As he gets to know them, he also gets to know himself and what he truly wants.

When all the Jones siblings gather for a family wedding, the four adults are drawn together for the first time in a way they never were as children. As they struggle to accept each other, warts and all, the true nature and strength of their bond is tested. But all of them come to realize that your family are the people who see you for who you really are and love you anyway. And for Dakota, that truth allows him to find the home and family he’s always wanted.

A literary classic this is not, but it is a heartwarming enjoyable read with a villainess who is easy to hate and a hero who is easy to love.  As we watch Dakota come to town and discover the stability and love his siblings have found there we realize that much of the happiness we find in life is found because we choose to find it and live it, warts and all.

I'd like to thank the publisher for making a review copy available via NetGalley.  Grade:  B.
Posted by RAnn at 4:22 PM No comments: Prep meets Girls in White Dresses in Genevieve Sly Crane’s deliciously addictive, compulsively readable exploration of female friendship and coming of age that will appeal to anyone who has ever been curious about what goes on in a sorority house…

There’s a rumor she died because she couldn’t take the pressure of being a pledge. You may not ask what happened to her. It’s not your business. But it wasn’t a suicide, if you’re wondering.

Spring Fling will not be cancelled. The deposit is non-refundable. And Margot would have wanted the sisterhood to continue in her absence, if only to protect her sisters’ secrets: Shannon is the thinnest girl in the house (the other sisters hate her for it, but they know her sacrifice: she only uses the bathroom by the laundry room); Kyra has slept with twenty-nine boys since she started college (they are all different and all the same); Amanda is a virgin (her mincing gait and sloping posture give it away); and while half the sisters are too new to have known Margot, Deirdre remembers her—she always remembers.

With a keen sense of character and unflinching, observant prose, Crane exposes the undercurrents of tension in a world where perfection comes at a cost and the best things in life are painful—if not impossible—to acquire: Beauty. A mother’s love. And friendship…or at least the appearance of it.

Does this sound like a book that is going make sorority girls look good?  I started reading it, and gave up after a few chapters.  I just couldn't find any of those girls to like.

I wasn't a sorority member, and my college didn't have national sororities, only local social clubs.  I wasn't a member and saw only the public parts of pledging.  I thought it was a lot of foolishness and couldn't understand why some girls were in tears over pledging activities and yet wanted to continue--if someone deliberately did things that got me upset I'll tell her to take a long walk on a short pier and go find something else to do. Still, all in all, most of the girls I knew who were in clubs were intelligent, competent, basically good people, whereas the characters in this book are all the stereotypical college girls with issues, and none of them really seem like they'd be fun to be around.  Maybe that's why they are all miserable.

Thanks to the publisher for providing a review copy.  DNF.