A fire killed his best friend and his lifelong dream of being a firefighter. The same fire killed her husband and hopes for a family. Can new dreams replace old?

Lucas Vermontez was a proud firefighter like his father. Now, not only has he lost his father and his best friend, Zach, in the fire at the Grove Street homeless shelter, but the devoted rookie can no longer do the work he loves after being crippled in the tragic event. When friendship with his buddy’s beautiful widow turns into more, he wonders, what could he possibly offer Jenna? Jenna Morgan is trying to grieve her husband’s death like a proper widow, but the truth is, she never really loved Zach. His death feels more like a relief to her. But that relief is short-lived when she loses her home and the financial support of her in-laws. Now the secrets of her past threaten to destroy her future.

With no prospects for marriage and her parents recently deceased, Susannah Underhill agrees to go west to the Dakota territory to marry her minister's homesteading brother, Jesse. But Susannah is painfully shy, doesn't see herself as worthy of love from either a husband or from God, and lives in constant fear that Jesse is going to ship her back to Detroit.
In spite of her petite size and the fact that Susannah doesn't look like she could survive on the prairie, Jesse quickly discovers that his new wife is a greater blessing than he even hoped for. The years she spent as her father's veterinary assistant allow her to save Jesse's ox and twin calves and to help neighboring farmers with their animals.
But Susannah's feelings of unworthiness are deeply rooted, and she can't believe that Jesse's praise-or the tenderness and love he shows-could possibly last. The thawing of her heart seems almost as distant as Spring in the midst of the winter blanketing the Dakota prairie.
Free Kindle Downloads (which I may actually read someday)

I stayed away from NetGalley again this week.

To be reviewed later this week, for a tour.

To be reviewed in June, for a tour.

Home and Away: A Story of Family in a Time of War 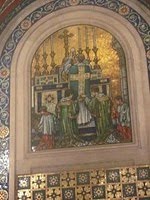 I'd like to welcome everyone to Sunday Snippets--A Catholic Carnival.  We are a group of Catholic bloggers who gather weekly to share our best posts with each other.  To particpate, go to your blog and create an entry titled Sunday Snippets--A Catholic Carnival.  In it, highlight one or more of your posts from the past week that you believe would be of interest to Catholic bloggers---whether they are posts reflecting on spiritual matters or posts about antics of Catholic kids, or anything in between.  Come back here and enter the URL of that post into Mr. Linky.  Finally, go visit other participants, and leave comments!  If you want a weekly reminder to post, join our yahoogroup.

I have a couple of book reviews this week and I'd like to invite you all to enter my giveaway of a book about Mother Teresa.    How about you?

About the Book:
This book details the leadership principles used by Mother Teresa in building one of the world’s largest and most successful organizations, with this as its central lesson: leaders must articulate a simple vision, and execute it with absolute practicality. Bose—who spent eight months working with Mother Teresa in 1992-3—and Faust have distilled Mother Teresa’s leadership style into nine essential principles. Each principle shows readers how to apply Mother Teresa’s wisdom in their lives and businesses.
Much has been written about Mother Teresa. She is an actual saint, beatified by Pope John Paul II in 2003, as well as the winner of the 1979 Nobel Peace Prize, This book is the first to view her in another light—as a pragmatic, realistic leader who over 47 years raised billions of dollars and helped millions of people. This often meant making tough decisions—such as accepting donations from people of questionable morals. This book has the principles that guided those decisions. These are universal principles that can help any leader working to keep an organization on course and on mission.
My Review:  Click here.
Giveaway:  After my review published, I was offered a copy of this book to give away.  If you'd like a copy,  leave a comment with your name and email address.  For a second entry, tell me your favorite saint.  I'll select a winner next Saturday, right before I write my Sunday Snippets post.
Posted by RAnn at 8:41 PM 7 comments:

About the Book:
Onstage, the singing duo of Gabe and Mitzi Steiner captured America's heart for more than two decades. Offstage, their own hearts have throbbed as one for sixty years. Only now, Gabe has retreated into the tangles of Alzheimer's, leaving Mitzi to ponder her future alone.

On the other side of Tulsa, everyone believes Brooke Woodson has found the perfect man--a handsome lawyer with sights on becoming Tulsa's next District Attorney. If only Brooke felt more sure. If only her fiancé could control his anger. If only love didn't come with so many scars.

When an accident lands Brooke in the hospital where Mitzi volunteers, the two women quickly develop an unlikely friendship birthed by providence and bathed in grace. And with Mitzi's help, kindness, and insight, Brooke learns how to pick up the broken pieces of her life.
My Comments:
In Broken Wings Carla Baker does as good a job with an "issue" book as any I've seen.  Brooke is abused by her fiancee and every element of the classic abuse case is there--the charming man, the apology, the lies, the isolation from family, the adoption of a lifestyle not her own.  Gabe has Alzheimer's and we get a full run-down on what that means.  Still, Broken Wings manages to be a story that educates rather than a text book.  Mitzi remembers her childhood and early adult life and tells Brooke about it.  Brooke breaks free from the abusive relationship and claims the life she was meant to live.  In some ways the ending is too good, but I much prefer ending a book with a smile on my face to having tears streaming down my face.
The book is Christian fiction but not in an in-your-face manner.
I'd like to thank the publishers for making a review copy available via NetGalley.  Grade:  B.
Posted by RAnn at 10:10 PM 5 comments:

See the story of Esther in an entirely new way-with all the political intrigue and tension you remember, but told as a passionate and tender love story between a young man and woman. Misunderstood by many, King Xerxes was a powerful but lonely man. Esther's beauty caught the eye of the young king, but it was her spirit that captured his heart.

Imagine anew the story of Esther, one of our faith's great heroines, destined to play a key role in the history of Christianity.

David French picked up the newspaper in the comfort of his penthouse in Philadelphia, and read about a soldier - father of two - who was wounded in Iraq. Immediately, he was stricken with a question: Why him and not me?
This is the story of what happens when a person - rather a family - answers the call to serve their nation. David was a 37-year-old father of two, a Harvard Law graduate and president of a free speech organization. In other words, he was used to pushing pencils, not toting M16s.
His wife Nancy was raising two children and writing from home. She was worrying about field trips and playdates, not about her husband going to war.
HOME AND AWAY chronicles not just a soldier at war, but a family at war - a husband in Iraq, a wife and children at home, greeting each day with hope and fear, facing the challenge with determination, tears, and more than a little joy.

Kimberly Tucker's life hasn't turned out the way she thought it would. A divorced mother of two, Kim resents her ex-husband for moving on with his life and living it up while she struggles to understand what went wrong. When her sons end up spending five weeks of summer vacation with their father, Kim's own father suggests a respite in the family vacation home on tiny Cedar Key Island. As Kim revisits her childhood memories and loves, she soon discovers that treasures in life are often buried, and mistakes--both past and present--become redeemable in God's hand.

Readers will be swept away to an island retreat where they walk alongside Kim as she discovers that God's answers may not come easily, but they do come.

Three grown Southern sisters have ten marriages between them—and more loom on the horizon—when Ginger, the eldest, wonders if she’s the only one who hasn’t inherited what their family calls “the Grandma Gene”: the tendency to like the casualness of courtship better than the intimacy of marriage. Could it be that her two sisters are fated to serially marry, just like their seven-times wed grandmother, Mrs. Lillian Irene Harper Winslow Goldstein Carey James Bobrinski Gordon George?  It takes a “girls only” weekend, closing up Grandma’s treasured beach house for the last time, for the sisters to really unpack their family baggage, examine their relationship DNA, and discover the true legacy their much-marrying grandmother left behind . . .
NetGalley:  I was good; between lack of reading progress this week and all the snail mail I didn't download any of those I saw and wanted.  Maybe next week.

Other posts:
I write about Amazon reviews. and about my son's graduation.