One service to which you gain access as an Amazon Prime member is Prime Wardrobe. With Prime Wardrobe, you can select up to eight pieces of eligible clothing, shoes or accessories and have them shipped to you without your credit card being charged.  Once received, you have 7 days in which to try on the items and decide whether to keep them.  If you don't want them, you have a pre-paid return label to return them in the same package in which you received them.  Your card is only charged for the items you keep.

I'm writing this on Easter morning. Mass on TV starts in 30 minutes, it will be our fourth Sunday not at our parish. While our parish is offering a livestream this week for the first time, I think we'll stick with the Cathedral on TV.

I'll start my fourth week of working at home tomorrow.  I've been going in to the office about once a week to deal with things I can't do from home but I'm able to access my work computer via GoToMyPc, so in a lot of ways it's like being in the office.  The two major parts of my job are scheduling and summarizing.  Not much scheduling going on right now. I still have plenty of stuff to summarize right now, but all the car insurance companies are issuing refunds because all this social distancing means that people are driving less and getting in fewer accidents.  Unfortunately, I'm in the car accident business and fewer accidents today mean fewer suits a year from now.

As far as working at home, it has its advantages and disadvantages.  The commute is great.  I love the wardrobe and I've only had make-up on my face once in the last month. I've become the family cook again and the food is better than when the kids cook. I am able to take a walk at lunchtime and not worry about whether I stink when I get home.  On the other hand, I miss being around other people and my kitchen table is not as comfortable as my work desk, and I'm worried about our business long term.

Honestly, at this point, I'm over it, and I don't see an exit.  At what point are the numbers low enough?  If we get better at treating it, does that help?  We are all going to die one day, at what point do we say the cost of all this social distancing for everyone is too much?  I have two kids who are laid off and my husband's business is way down--and as I've said, it hasn't hit me yet, but our "pipeline" is blocked.  People say you can't put a price on human life, and while that is a nice sentiment, how many human lives will this shutdown cost?  People with too much anxiety? People who aren't able to have "elective" procedures dying prematurely?  The longer this goes on, the greater the collateral damage.

How are things going for you ?

No, I don't have it (yet, that I know of) nor do any of my family members.  Still, this has been quite a month. I remember back around Mardi Gras, people joked that we were all going to get that Chinese virus from all the junk made in China that was being thrown into the streets.  Today, the death rate in Orleans Parish is the highest in the country and we are a hotspot of infection.

On March 13 the mayor of New Orleans and later, the Governor  issued an order requiring social distancing and cancelling some events set for the weekend, namely St. Patrick and St. Joseph parades.  Schools were closed through at least April 13.  They banned gatherings over 250 people.  In response, Archbishop Aymond dispensed Catholics from their Mass obligation but said that churches would remain open and Masses said.

I'm a Girl Scout leader and when I heard all that, my first thought was "thank goodness we didn't plan to sell cookies this weekend".  Ours were gone, and we'd made our money. Still, I don't think people took it seriously. I know lots of troops who worked their booths that weekend, even advertising the cookies as quarantine snacks.

We had been invited to a big birthday party for a 90 year old.  I texted her daughter to see if it was going forward, and she said yes, but no hugs or handshakes allowed.  The kids roamed the room offering everyone hand sanitizer.  While some of guest of honor's peers chose to self-isolate, most of the younger folks saw it as a joke--elbow bumps were exchanged instead of hugs. Down in the French Quarter a crowd gathered on the street when the bars had to keep them out due to social distancing.  We went to Mass on Sunday.  My church isn't crowded on a good day, and about half the usual crowd attended.

Monday my husband and I headed to work as normal, leaving my teen and my now unemployed son at home.  I work for a law firm and have my own office with a door. Everyone in my office has a decent-sized space of their own, most with doors so social distance isn't hard.  My office overlooks the Interstate, which is usually very busy.  I was creepy seeing how few cars were on it.  Monday the Governor limited restaurants to take-out or delivery only. My husband sells seafood to restaurants--Lent is supposed to be his busy season and now many of his customers were shutting down.  How long will his job last?  That same day Archbishop Aymond cancelled public Masses through April 13.

My daughter's school began virtual lessons on Tuesday.  Despite the fact that much had changed, my life really hadn't--I went to work daily, came home and then walked with my husband.  My Girl Scout meeting and religion classes were cancelled but that was it.

Saturday was weird. My daughter recommended purchasing a wi-fi booster so I ordered from Amazon, which couldn't tell me when it would be delivered.  I cancelled the order and headed to Best Buy.  You had to tell them at the door what you wanted and they had one sales person for each person they allowed in the store, and they kept their distance.

Sunday we watched Mass on TV and I had tears rolling down my cheeks and I can't even explain why.

Sunday afternoon the Governer announced even more restrictions. Most businesses were required to close effective 5 p.m. Monday.  I headed to work Monday expecting to be send home with equipment and directions about working remotely.  When that didn't happen by late afternoon I wondered if layoffs were in our future.  No, it seems law firms were allowed to stay open with essential employees, but we could make arrangments to work from home if we wanted.  I had a couple of big projects to work on so I emailed them to myself and planned to come back into the office periodically to get stuff.

Working from home means wearing comfy clothes to sit in an uncomfy chair and using computers designed to be toys rather than workhorses.  Still, I made it through the week.  I've been homeschooling my daughter in PE--she was getting no movement at all so I drag her out for a walk at lunchtime.  We've probably talked more in the last week than we have in ages. 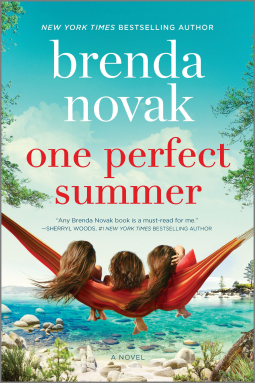 When Serenity Alston swabbed her cheek for 23andMe, she joked about uncovering some dark ancestral scandal. The last thing she expected was to discover two half sisters she didn’t know existed. Suddenly, everything about her loving family is drawn into question. And meeting these newfound sisters might be the only way to get answers.

The women decide to dig into the mystery together at Serenity’s family cabin in Lake Tahoe. With Reagan navigating romantic politics at work and Lorelei staring down the collapse of her marriage, all three women are converging at a crossroads in their lives. Before the summer is over, they’ll have to confront the past and determine how to move forward when everything they previously thought to be true was a lie. But any future is easier to face with family by your side.

Have you every wanted to take a vacation from real life?  Have you ever gone through a time in your life where it was apparent that life as you knew it had to change, a lot?  Put those two things together with an unexpected result from a DNA test and you have One Perfect Summer.

Serenity, Reagan and Lorelei all took at DNA test for different reasons, and through it, found out that they were half sisters.  While Lorelei knew nothing about her family or family history as she had been found wandering the streets as a toddler, the other two, Serenity and Reagan have always known where they came from--or did they?

The women decide to meet for a week at Serenity's family cottage to get to know each other and try to figure out how they could be half sisters.  As luck would have it, all three undergo significant life upheaval after they plan their trip, but before they meet, and so are dealing with important life choices, as well as their relationship with each other.

During the course of the story, the women deal with ghosts from their past, men in their lives and the secret that brought them together.  However, there is an old saying that if you hear hoofbeats, think horses, not zebras, and to me, the most likely horses about why they are related (sperm donor fertility treatment or adoption) never seem to be considered, and yes, in the end, they do find a zebra but to me it just sort of fell flat.

The story also gives each woman a love interest in the book and, in the end, there was no real resolution there either.  Maybe that's how real life is--there is a hint of happily ever after, but no real resolution of that plot line.

I'd like to thank the publisher for providing a copy of the book via NetGalley.  Grade:  B.
Posted by RAnn at 10:24 AM No comments: