We are now 2.5 months into "Covid time".  The final quarter of my daughter's sophomore year of high school was totally online.  Mass was online/TV only for eight week; now we are allowed to have the church 25% full, but my parish has a lot of old people and we haven't come close to the allowed number.

When the state moved to "phase 1" re-opening the middle of May we were told to be back in the office.  Honestly, I'd pretty much gone back earlier, it was just easier--and I liked seeing other people.

Memorial Day weekend my husband and I went to Long Beach Ms. where we at in a restaurant and then we visited my brother and went out in his boat.  It was nice to get out and seem somewhat normal.  They are supposed to decide tomorrow whether we can move to "phase II" or whether we need to spend more time at Phase I.  Using an eyeball estimate, deaths are down from the beginning of the month, hospitalization is down a lot and cases may be down a little.  Phase II will allow daycamps and daycare to re-open which will allow some parents to head back to the office. Right now the parking lot in my building is quite empty.

Masks are now the order of the day.  I keep one with me.  If a mask-wearer comes in my office, I pull mine up.  I don't generally wear it in the hallways at work--we are quite separated.  I wear it in stores or other public places were I am apt to get close to people, but those "stand here" stickers, tape markings etc. have become ubiquitous. We are asked to wear one at Mass.

My daughter and my son both work in the hospitality industry and both are laid off with no return in sight.  My husband hasn't had a bonus since this all started, but his bonus is a nice extra, not what pays the bills here.  I've been really busy at work and have even gotten some overtime.  Financially my family is doing okay but I wish the kids were working.  My daughter and her boyfriend took a two week trip to Tennessee--the owner of their company owns some vacation cabins and he traded them accommodations and food for some work freshening them up.  They had fun but she's glad to be home.

All in all, this has been a nuisance, not a tragedy in my family but I'm ready for it to be over.
Posted by RAnn at 9:39 PM 3 comments: 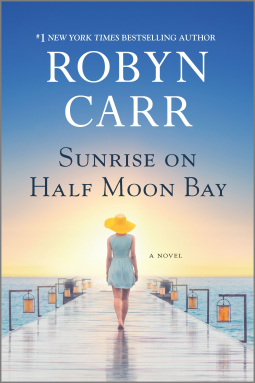 Sunrise on Half Moon Bay

Adele and Justine have never been close. Born twenty years apart, Justine was already an adult when Addie was born. The sisters love each other but they don’t really know each other.

When Addie dropped out of university to care for their ailing parents, Justine, a successful lawyer, covered the expenses. It was the best arrangement at the time but now that their parents are gone, the future has changed dramatically for both women.

Addie had great plans for her life but has been worn down by the pressures of being a caregiver and doesn’t know how to live for herself. And Justine’s success has come at a price. Her marriage is falling apart despite her best efforts.

Neither woman knows how to start life over but both realize they can and must support each other the way only sisters can. Together they find the strength to accept their failures and overcome their challenges. Happiness is within reach, if only they have the courage to fight for it.

Set in the stunning coastal town of Half Moon Bay, California, Robyn Carr’s new novel examines the joys of sisterhood and the importance of embracing change.

All of us have times in our lives where things seem to pretty much go on as "normal" and, unfortunately, times when change is forced upon us.  Even when the change ends up being for the better, most of us would rather call the shots than to have situations or other people make us change.

Adele has been living her life for others for her whole adult life. She dropped out of college and moved home to care for sick parents.  Her life hasn't been bad, and she could have chosen to leave, but she didn't.  However, she's never been in a position where she felt she was making career, school or relationship decisions.  Now her parents are gone, and she plans to make plans when she decides what she thinks she wants--yea, she isn't doing a whole lot.

Her sister, on the other hand, has a full life--a high-flying career, two kids, a husband, etc. Until that implodes.  Now both sisters are trying to put their lives back together which, in part, means deciding what they want--and yes, WHO they want is part of it too.

As with many of Robyn Carr's books, the characters are the strength of this book and through their eyes we see that even people whose lives appear perfect often have problems the world doesn't see.  I cheered for these sisters as they charted their new lives an believe you will too.

Thanks to the publisher for making a review copy available via NetGalley.  Grade:  B.
Posted by RAnn at 9:07 PM No comments:

Some Covid-19 stats and My Comments

I've been reviewing the Covid-19 states published in my local paper  and slicing and dicing them and I'd like to share a few with you all.

Just so you know something of my pre-suppositions and prejudices etc., I'm a relatively conservative Republican who doesn't really care for President Trump.  I just consider the alternatives presented to be much worse. However, I do not see this disease as made-up crisis designed to torpedo him (though I do see his opponents trying to use it as such).

I believe human life is important, however I question the those who decry a return to openness by complaining that more lives will be lost and that we are prioritizing money over people. Life is a risk, the question is how much risk are we willing to bear.  In the 1970's the speed limit was lowered to 55 mph to save fuel.  When that was no longer an issue, it was kept that way for years because it saved lives, but eventually people had their way and the state were allowed to set their own speed limits.  Yes, the death toll went up, but I doubt many would vote to reduce them.

My car insurance company has sent me refunds the last two months--it seems that with everyone staying home, car accidents have decreased.  Maybe we should stay on lock-down forever to keep people from dying in car accidents?  This weekend I went out in the boat with my brother.  I'm guessing I took a much bigger risk by getting in that boat than I did by being close to him, someone who doesn't live with me, yet while there are plenty of people who would question my judgment in being close to him, few would consider me reckless for going on a boat ride.

I think a few week lockdown to let the doctors and hospitals get a handle on this thing was probably a good idea; however, the longer it goes on the more I question whether it is worth it.

Who Is Getting Covid-19, and Who Is Dying?

Children make up 25% of the population but only 1.3% of those who have tested positive. They make up less than 1% of the dead.  Of those 18 and under who tested positive, 0.2% died.

So, using the format above and assuming that 90% of nursing home residents are over 70 (my estimate no figures to back it up, but my guess is that more than 90% are over 70), let's do some math.

Every day NOLA.com publishes how many new people have tested positive, how many people are in the hospital and how many people died.  Honestly, I've never been very interested in the number of positive tests.  At first they were limiting who could get tested, then they were encouraging lots of folks to test.  I think one thing everyone agrees on is that lots of people have been infected who have never tested positive.

The day with the highest number of deaths was April 13 when 2034 people were hospitalized.  I was curious about how the deaths compared to the hospitalized people.  If you divide the day's deaths but its hospitalized population, between March 23 and April 12, on average 2.8% of the patients died each day. The worst day was March 31 when 3.9% of the patients died.  Between April 13 and May 13, an average of 2.83% of the hospitalized people  died each day.  Ten of  days between April 13 and April 30 were above that average,whereas from May 1 to May 13, only 4 were. It seems that they are getting a better handle on how to treat it--either that, or less sick people are being admitted to the hospital.

Update:  Between May 12 and May 24, an average of 2.3% of the hospitalized people died each day. In the first seven days, five were above that average, in the last seven days, only two were.

I've left comments on the paper's facebook page with questions I'd like to know the answers to, but was told they report the data they get from the state.  I know some of the numbers I'd like to see may not be flattering to one hospital or the other or may be considered invasive of the privacy of people, but nevertheless, here are some things I'd like to know:

What's the total number of people who have been hospitalized for Covid-19 since this began?  Were all the dead in the hospital?  How long was the average patient hospitalized for?  Has that changed over the last two months?  Obviously, ventilators are a lot smaller part of the treatment than they once were.  What other changes have been made in managing this disease?  Have the death rates among the hospitalized gotten better--in other words is my analysis close to correct about that?

Honestly, I really don't care how many people are getting "the crud".  If Covid-19, absent a swab, would be nothing to a particular patient but another seasonal virus that made him or her feel lousy for a few days, I have a hard time getting concerned about it--yes, I know transmission is an issue, but the reality is we will never know how many people have been infected with this.  It appears that there are people who are infected an never have symptoms. There are obviously people who are infected and have never been diagnosed.  That's the main reason I chose to focus on hospitalization numbers rather than case numbers.
Posted by RAnn at 1:56 PM 4 comments: