Review: Pope Francis in His Own Words 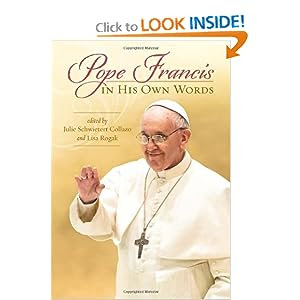 Pope Francis in His Own Words

About the Book:
The moment the identity of the newly elected 266th pontiff was revealed, it was clear to the thousands gathered in St. Peter’s Square, and to the watching world, that this pope was different in fascinating and exciting ways — the first from Latin America, the first Jesuit, and the first to take the name Francis, in honor of St. Francis of Assisi.

When Pope Francis, formerly Cardinal Jorge Mario Bergoglio of Buenos Aires, spoke from the balcony of St. Peter’s Basilica, he greeted his audience colloquially: “Brothers and sisters, good evening.” Downplaying his power and position, he proceeded not to bless the crowd but to ask them for their blessing: “I ask a favor of you,” he said, bowing humbly. “Let us make, in silence, this prayer: your prayer over me.”

Francis has repeatedly foregone the fancy dress, lavish accommodations, and other luxuries of his position, emphasizing pastoral work with the sick and the poor and always seeking to empower the underdog. This revealing collection of his own words, gathered from sermons, interviews, and the Pope’s books, prompts understanding and insight into his way of being and believing — and inspires goodwill, love, and hope.


My Comments:
They say if you want to know someone, listen to what she or he has to say.  This book teaches us about Pope Francis by quoting things he has said in the past about various topics.  Most of the quotes are short, a paragraph or so.  While the book includes and extensive bibliography so readers can read even more about our new Pope, from the book itself you cannot tell if the quotes were taken out of context or not.  It is a  relatively short book that I read in a couple of hours.  I'll leave you with a few of the quotes:


The child has absolutely no responsibility for the state of his parents' marriage.  Often a baptism can be a new start for the  parents as well.

In some churches--and I don't know how to remedy this, honestly--there is a fierce competition         between bridesmaids and brides.  These women aren't observing a religious act; they're just showing off.  And this weighs on my conscience; as a priest, I am permitting this and I haven't found a way to put a stop to it.

What world are we leaving our children?  Maybe it would be better to ask, "What children are we giving this world?"

The most dangerous idols our own selves when we want to occupy the place of God.