About the Book:
Think you cannot cook because you have never cooked before or are disabled? Think again! Some recipes included are: chocolate butterscotch pudding, cake lady finger surprise, brown sugar buttered pork chops, and more. "Matthew definitely embodies a person with determination. He has overcome many obstacles in life, including getting his master's degree despite having cerebral palsy" -Jeremy Stewart "Matthew learned a one-handed keyboarding method. He was willing to practice the technique correctly. This resulted in him often typing faster than students using both hands. Keyboarding afforded him the opportunity to learn a lifelong skill for written communication and expression" -Mrs. Diann M. Snellings, school librarian, A.G. Richardson Elementary School.

My Comments:
Since I have a son with autism, this book caught my eye.  While my son can and does cook, I know there are a lot of people with disabilities far more life-limiting than his.

The recipes in this cookbook are simple and as you'll note if you click here:   Overcoming Obstacles in Cooking

they are laid out one per page with a box around the ingredients, making it clear what part of the recipe is ingredients and what part is directions.  Not only is that good for people with disabilities but for anyone just learning to cook.  One recipe is Brown Sugar Pork Chops.  It calls for one package of boneless center-cut pork chops, salt and pepper for taste, one stick butter and 1 cup brown sugar.  The directions say:


Preheat the oven to 375 degrees.  In a shallow glass baking dish, place the pork chops flat.  Cut the butter into small pats and la them on top of each pork chop.  Season with salt and pepper to taste and cover each chop with generous amounts of brown sugar.  Roast in the oven for 20 minutes.  Flip the pork chops over and salt and pepper to taste and add another generous amount of brown sugar to each pork chop.  Replace in the overn and orast for another 10 minutes and check that the internal temperature is 140 degrees with a meat thermometer.  Remove from the oven, allow to cool, and serve.

I used a 13X9 metal pan since I don't own a glass baking dish of appropriate size.  I covered the bottom with pork chops and ended up using a little more than one package (ours were thinly sliced).  Here is what they looked like before they went in the oven: 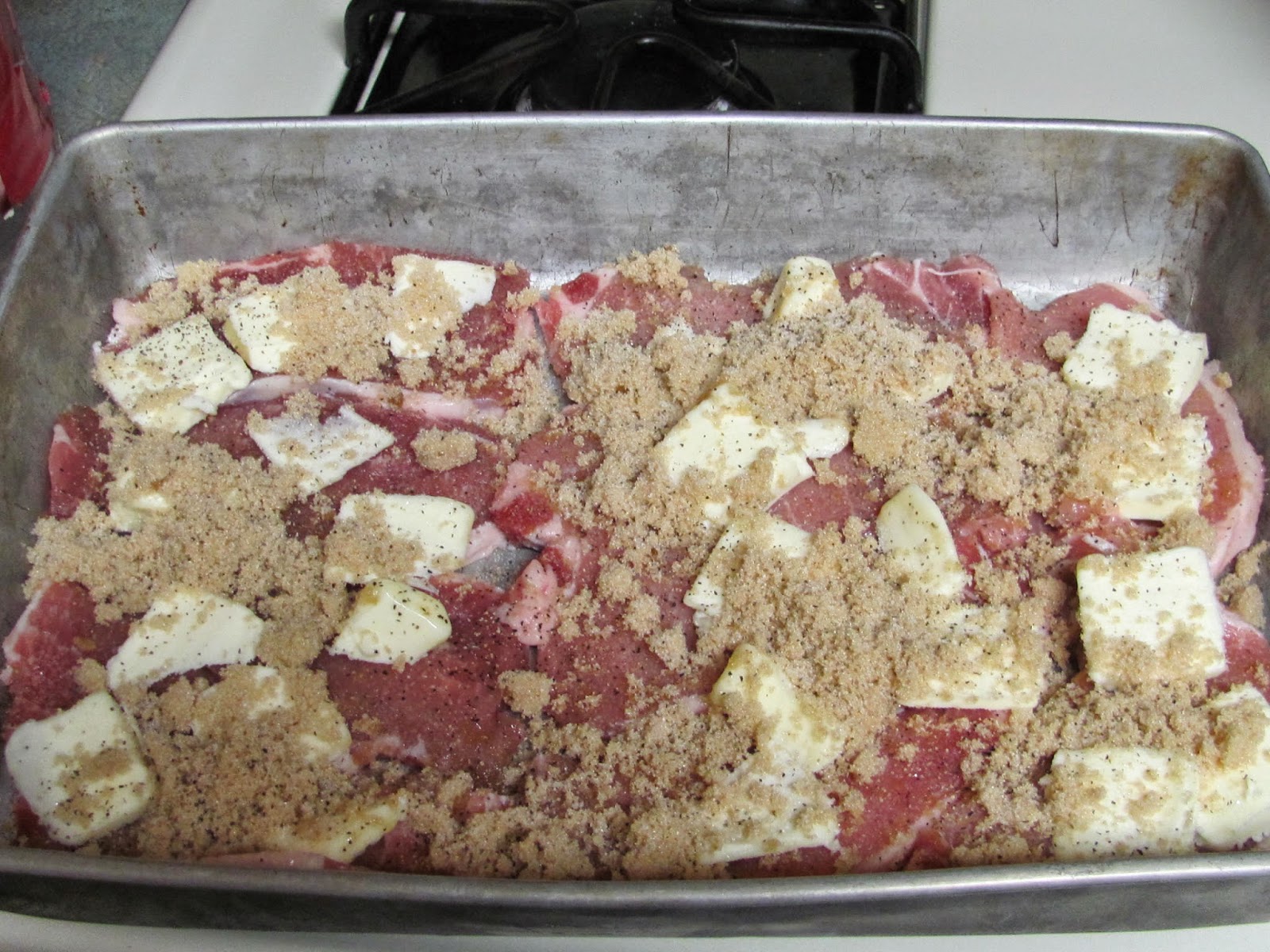 I finished the recipe as directed and here is the "after" picture: 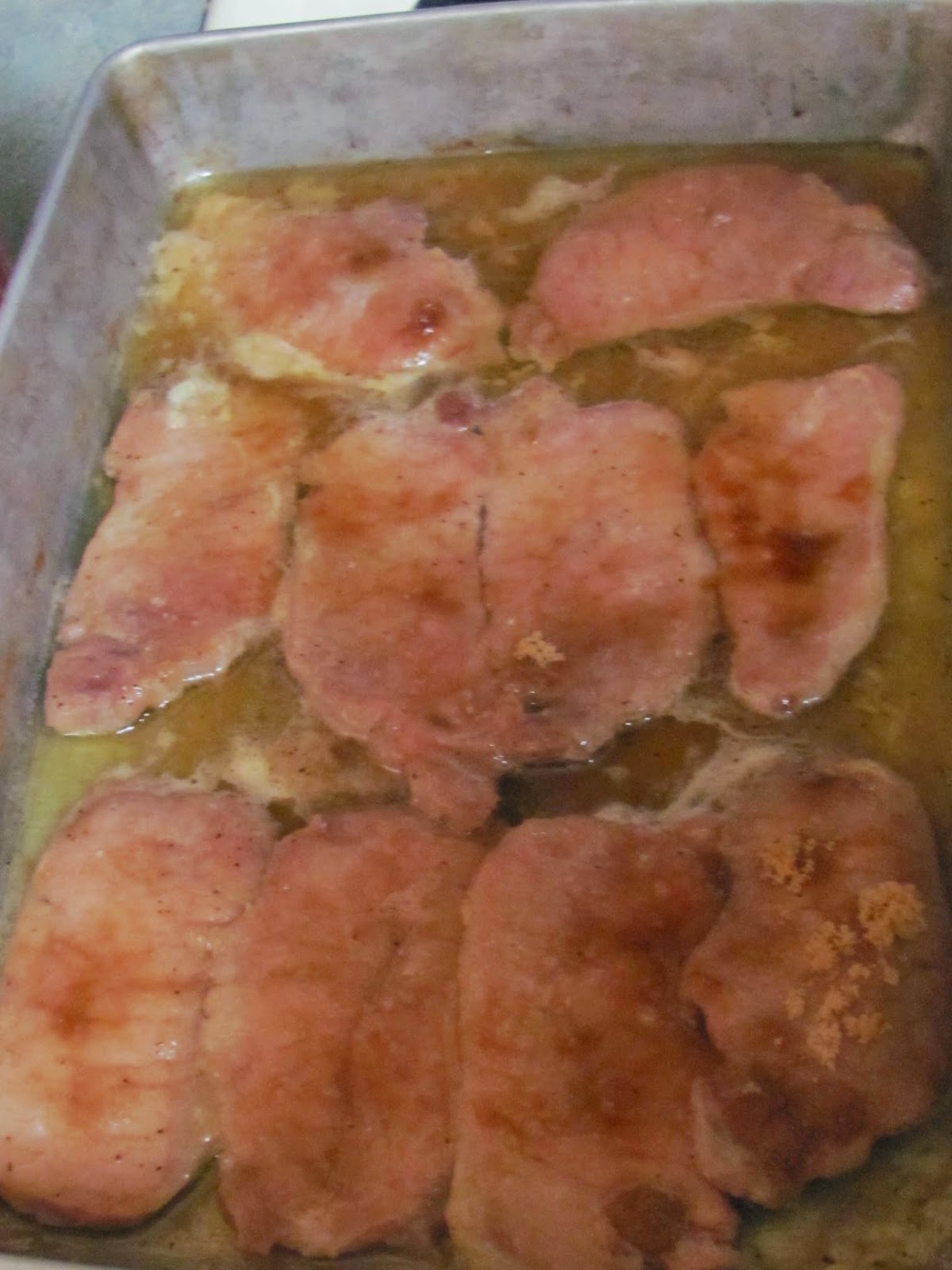 The family loved them; they were nice and sweet and tender.  Since there was so much sweet butter sauce left when dinner was over (the four of us downed all those chops) I took the uncooked chops that were left and put them in the oven in the leftover sauce.  They were good too!

Usually I consider the appendices of books to be parts to skip, but in this case they are an important part of what makes the book uniquely good for its intended purpose.  The are:
I'd like to thank the author for providing a review copy via Bostick Communications.  Grade:  B+.