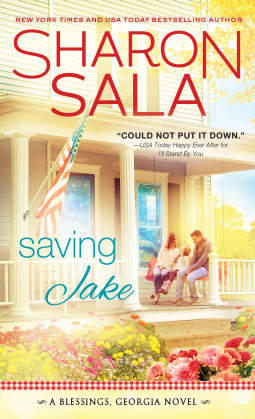 There is always hope.
After eight years in the Marines, Jacob Lorde returns to Blessings, Georgia, with no plans other than to hole up in his empty house and heal what's left of his soul. But with a charming next door neighbor and a town full of friendly people, keeping to himself is easier said than done.

As long as you can come home.
Laurel Payne understands far too well what Jake is going through, after witnessing her late husband experience similar problems. She's in no hurry to jump into another relationship with a complicated guy, but their attraction is undeniable-and perhaps exactly what both of them need.

Ok, romance novels aren't known for their original plots.  In case you are wondering, Laural and Jacob end up together, but that's not the spoiler, you probably guessed that after reading the blurb.  You read romance novels for the journey, not the destination.

I liked Laural and I liked Jake.  They were good, hurting people who found each other at the right time in their lives.  Laurel is busy trying to hold everything together and is finding the burden hard to carry; Jake is trying to build a new life; he isn't in the Army anymore and his family is all dead.  He is suffering from PTSD but takes time for others.  I loved Laurel's little girl and her pet chicken.  I had to smile at the same of the lawyer in the book:  P. Nutt Butter.

What didn't work in this book was just about everything else.  When he was in high school Jake witnessed a crime and reported it, sending the perpetrator to jail.  The guy is now out of jail and seeking revenge.  The way that thread ended just didn't ring true.  Also, Laurel's mother-in-law blamed Laruel for her son's death and had turned their whole family against Laurel.  Not only are they giving her the cold shoulder, they leaving dead animals in her driveway regularly.  Laurel runs into her sister-in-law at the store and threatens to get a restaining order if they don't stop.  The sister-in-law passes the message along but Mama insists that the feud continue.  Shortly thereafter when Laurels' brother-in-law and his wife are on their way home from dropping off another dead animal, they are in a wreck that killed the wife. While mourning her, Mama dies, and with her, the feud.  When Laurel and Jake marry, her sister-in-law is her matron of honor and the best man is her brother-in-law.  Sorry, but while I believe in forgiveness, I have a hard time seeing this much of a reconciliation after just a couple of months.

I'd like to thank the publisher for making a review copy available via NetGalley.  Grade: B-
Posted by RAnn at 8:06 PM