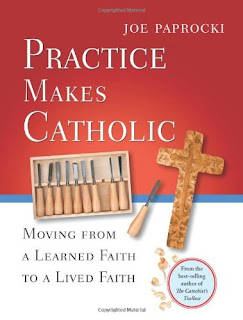 It is said that practice makes perfect, but what else does practice make? If you ask Joe Paprocki, he’ll say that practice makes Catholic—that is, there are certain distinct practices that make us essentially Catholic. The problem is that many Catholics don’t understand—or at least misunderstand—why we engage in the many practices we do. In Practice Makes Catholic, Paprocki addresses the all-important “why” of many Catholic practices by articulating five key characteristics that form our Catholic identity: a sense of sacramentality, a commitment to community, a respect for the dignity of human life and commitment to justice, a reverence for Tradition, and a disposition to faith and hope rather than despair. Under each of these categories, he explores and explains multiple Catholic practices, then describes how following each one can make a profound difference in our faith and in our lives. Informative and inviting, Practice Makes Catholic is the perfect resource for RCIA candidates and their sponsors, for Catholics returning to the faith, and for all Catholics who want to get to the heart of what their faith is really about.

A facebook friend of mine who was raised Catholic recently asked why, when movie producers want to show an exorcism, they always show a Catholic priest.  She wondered if other denominations practiced exorcism.  I did some quick research that showed that some did in one way or another, but then opined that when movie producers want to show ceremony or ritual, they show a Catholic church because that's people's image of Catholicism.  If the producer wants to show a sermon motivating a character's action, on the other hand, the church is likely to look more low church Protestant, because they are known for preaching, not ceremony.

A couple of years ago our parish got a new DRE, and one thing I really like about him is that he has put in adult education programs.  One was a study of Practice Makes Catholic and he offered it either in person or on-line.  Unfortunately, I found that I don't have the self-discipline for on-line.  However, eventually I did read the book.

In Practice Makes Catholic Paprocki takes a look at many of the rituals and practices of Catholics and explains the "why" as well as the "how". He explains sacramentals, the liturgical calendar, and the uniquely Catholic forms of prayer such as novenas.  He encourages learning more about the Catholic faith and offers resources.  All through the book though, the emphasis isn't on learning about these thing but rather on incorporating them into your life.

Like The Bible Blueprint which I reviewed last month, Practice Makes Catholic is easy to read.  I'd describe the book as "magazine-like" with short chapters, lots of side-bars and inset boxes, a few cartoons and a lot of use of headlines and bullet points to focus reader's attention.  I think the book is a good outline of how to live a Catholic life.

I bought the book to participate in my parish program and actually paid full price for it.  Grade:  B+