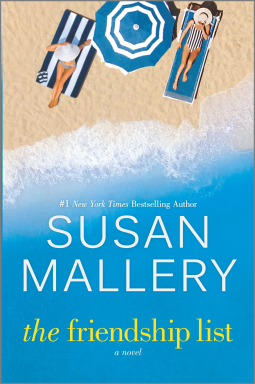 Single mom Ellen Fox couldn’t be more content—until she overhears her son saying he can’t go to his dream college because she needs him too much. If she wants him to live his best life, she has to convince him she’s living hers.

So Unity Leandre, her best friend since forever, creates a list of challenges to push Ellen out of her comfort zone. Unity will complete the list, too, but not because she needs to change. What’s wrong with a thirtysomething widow still sleeping in her late husband’s childhood bed?

The Friendship List begins as a way to make others believe they’re just fine. But somewhere between “wear three-inch heels” and “have sex with a gorgeous guy,” Ellen and Unity discover that life is meant to be lived with joy and abandon, in a story filled with humor, heartache and regrettable tattoos.

I think all of us reach times in our lives when we realize that if we don't charge our life, life will leave us behind. A child-focused life is great for the mother of school-aged kids, but when those kids go to college it is time to find another focus or to focus on other kids.  When you move to "part-time" at the office, you can pack your desk and head for the golf course, library, gym or fishing hole, or you can come in every morning to see if anything is happening that they need your help on.  Which is healthier?  Unity and Ellen both realize their lives need to change and as best friends they challenge each other to make the changes needed.

While I found some of their choices questionable, I enjoyed watching them embrace a new time in their lives.

Ellen got pregnant the night of her Junior Prom and had to grow up in a hurry.  The baby's father signed over his rights, so she has been the only parent her son has ever known--but now the ex wants a chance to know his son--the son who is between his Junior and Senior year of high school.

Unity lost her parents when she was in high school and moved in with her best friend Ellen's family until she moved out to marry her high school sweetheart.  She followed her husband, who was in the military, from base to base until he was killed and she returned to his childhood home where she has spent the last three years wallowing in grief and depriving herself of the normal life of a 30 something--her friends are Ellen and the people in the local seniors-only community  When Unity and Ellen challenged each other to move out of their neat little boxes, it was just what both of them needed.

That being said, I'll admit I'm old as dirt, overly religious and old-fashioned but I had a real problem with Ellen's behavior.  An important part of the book takes place on a school trip chaperoned by Ellen and her best friend (male), each of whom have a child on the trip.  On that trip, where she was responsible for other people's kids, Ellen was drinking alcohol, drinking enough of it to get drunk, and then sleeping with the other chaperone.  Just no.

One thing I found interesting was that the other chaperone had a teenage daughter.  He regularly inspected her birth control pill boxes to make sure she was taking them.  However, when he found out that she was actually "using" them, he blew his stack.  The daughter then pointed out that he had not made a rule against that activity.

Mallery's books are not the squeaky clean type, but I found this one to be more graphic than normal, unnecessarily so.

I'd like to thank the publisher for making a review copy available via NetGalley. Grade:  B.
Posted by RAnn at 10:13 AM