The Cookbook Club: My Review 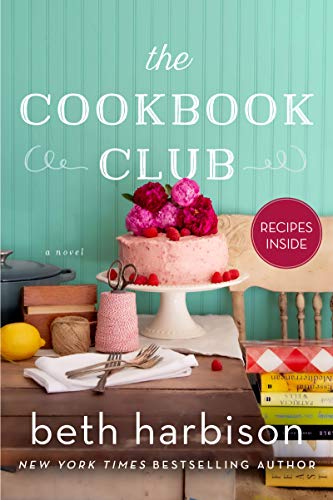 Margo Everson sees the call out for the cookbook club and knows she’s found her people. Recently dumped by her self-absorbed husband, who frankly isn’t much of a loss, she has little to show for her marriage but his ‘parting gift’—a dilapidated old farm house—and a collection of well-loved cookbooks
Aja Alexander just hopes her new-found friends won’t notice that that every time she looks at food, she gets queasy. It’s hard hiding a pregnancy, especially one she can’t bring herself to share with her wealthy boyfriend and his snooty mother.
Trista Walker left the cutthroat world of the law behind and decided her fate was to open a restaurant…not the most secure choice ever. But there she could she indulge her passion for creating delectable meals and make money at the same time.
The women bond immediately, but it’s not all popovers with melted brie and blackberry jam.  Margo’s farm house is about to fall down around her ears; Trista’s restaurant needs a makeover and rat-removal fast; and as for Aja, just how long can you hide a baby bump anyway?
In this delightful novel, these women form bonds that go beyond a love grilled garlic and soy sauce shrimp. Because what is more important in life than friendship…and food?

Margo got dumped by her husband, Aja got dumped by her boyfriend and Trista got dumped by her employer.  All three make a new start in life based in part on the friendship they develop through a cooking club--a club that starts about the same time as the dumping.
Usually I enjoy books about women re-inventing themselves and reaching out to do the things they want to do.  However, for whatever reason I never really connected with any of the main characters in this book.  I just found them strange.  When Margo is dumped, she realizes she has no real friends--her social life revolved around the wives of her husband's co-workers, and a book club.  So, what does she do?  She answers an ad for a cookbook club and in doing so, meets the only other two members of the club--Aja and Trista.
Aja goes with her boyfriend to meet his mother--and ends up getting hired as her gardener.  Oh, and just after the boyfriend dumps her, she realizes she is pregnant.   Trista is running a restaurant and as noted above, has a rat problem.  However, despite reading the book, I couldn't tell you anything about any of these women except that they love to cook (at least Margo and Trista do, I'm not sure about Aja).
While the food they cooked sounded awesome, I found the book rather mediocre.
I'd like to thank the publisher for making a review copy available via NetGalley.  Grade:  B-

Linked to Show-off Tuesday; join us for reviews, giveaways and recipes.