Doctors and Friends: Blogging Through the Book 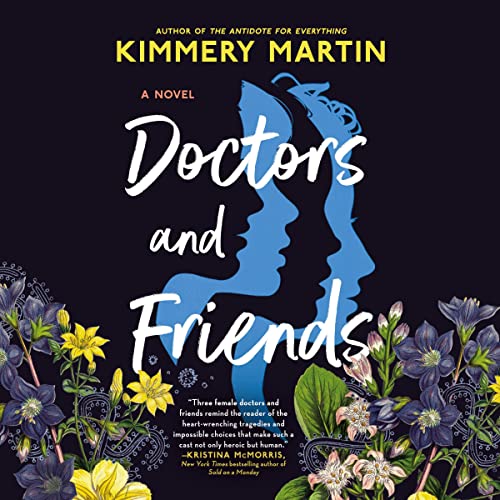 Hannah, Compton, and Kira have been close friends since medical school, reuniting once a year for a much-needed vacation. Just as they gather to travel in Spain, an outbreak of a fast-spreading virus throws the world into chaos.
When Compton Winfield returns to her job as an ER doctor in New York City, she finds a city changed beyond recognition - and a personal loss so gutting, it reshapes every aspect of her life.
Hannah Geier’s career as an ob-gyn in San Diego is fulfilling, but she’s always longed for a child of her own. After years of trying, Hannah discovers she's expecting a baby, just as the disease engulfs her city.
Kira Marchand, an infectious disease doctor at the CDC in Atlanta, finds herself at the center of the American response to the terrifying new illness. Her professional battle turns personal when she must decide whether her children will receive an experimental but potentially life-saving treatment.
Written prior to COVID-19 by a former emergency medicine physician, Doctors and Friends incorporates unexpected wit, razor-edged poignancy, and a deeply relatable cast of characters who provoke both laughter and tears. Martin provides a unique insider’s perspective into the world of medical professionals working to save lives during the most difficult situations of their careers.

The book opens at a Christmas party held after the pandemic was under control.  No, not Covid, a pandemic of the author's imagination, at least according to the preface of the book. Doctors and Friends was copyrighted/published in 2021 but the preface says it was written before Covid and the world in the book is fictional.  Evidently Kira is that world's version of Dr. Fauchi--the person who would get on TV and talk about the pandemic in the name of the government.  At that party we learn that "everyone" is wearing pins that broadcast their disease status and that the virus has a hidden long-term effect on the brains of some people.  We also learn that the virus caused economic devastation.  Shaking hands is no longer popular.  I have to wonder what edits were done to the manuscript after Covid-19 hit.
The timeline then shifts to just before the pandemic.  Kira and her medical school friends (all women) are gathering in Spain to see the sights and enjoy girl time, and Kira gets a call from work about this strange illness that starts with a cough and then kills people very quickly.
I love the relationships I see between these women.  They truly know each other's faults and love each other anyway.

The problem with blogging as  I read, as opposed to reviewing after I read is trying to decide how much to say.  Its hard to give an "on the ground" view on the book without giving away plot points.  Since this book is neither new at this point nor famous, I guess its not that big a deal but in other stories it might be.  So, be forewarned, there may be spoilers.
I'd really like to know what, if anything, was added to the book after Covid.   I mean this is all bringing back memories--the hallway chatter about that stuff in China.  The jokes in February during Mardi Gras about how all that Chinese junk that was being thrown from floats was going to get us all sick, and then the party St. Patrick's Day weekend when we bumped elbows instead of kissing--just in case.
In the book, the first signs are there, and the people are reacting pretty much the way we did.  Its like I can see the avalanche coming.  If the author truly wrote this pre-covid she did her homework is all I can say.

And Further Into the Story...

At the end, the author does admit she edited the book after Covid started and added some things--like Zoom calls, which I had wondered about because I hadn't heard of Zoom pre-Covid but now we all know that tic-tac-toe screen.
The virus in this story is much more lethal than Covid-19 and kills the young and the old so it sounds like people took it as much more of a threat than most considered Covid to be.  The US president in the story is a woman and as non-Trump as it is possible to make a character and this is no comment on policy, but on personality.  Love him or hate him, you have to admit that Trump's persona was "This is that I think and if you disagree you are an idiot", which is probably not the personality to be in charge of a situation that requires consensus from a variety of competing interests.

The beginning of the end of the story is back at the Christmas party and we learn how Kira and her friends made it through the pandemic and the losses they suffered.
As the pandemic kicked off we were Kira and her medical school friends on their yearly get-together and I thought something that was said was interesting.  Basically these were women who were together for four very important years in their lives and who have since gone their separate ways, to different towns, different specialities and different relationships.  Though they keep up by all the modern forms of communication, they are only together as a group on this yearly trip, and it was noted that they tended to revert to their 24 year old personalities when they got together.  I wonder if my college friends and I do that without realizing it?

So, Was It Any Good?

Yes, it was a good read that was close enough to the reality we have lived for the past two and half years to make me uncomfortable and far enough away so that comfortable detachment was possible.  Grade:  B+
Thanks to NetGalley for making a review copy available.  If you are a Kindle Unlimited subscriber, this is part of the subscription.
Posted by RAnn at 10:34 PM