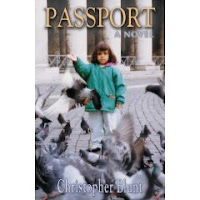 I read about this book on Catholic Fire (and who knows how I surfed onto that) and decided to order it. I mean if a Catholic reader like me won't buy this kind of book, why should anyone write it, right? I really wish I could write a gushingly great review of it, but I can't.
First the good: It is a really good story that kept me engaged throughout the book.
Now the bad: The author can't seem to decide if he is writing a novel or teaching a religion class. He makes sure that every cliche' of conserative Catholicism made it into the book at one place or another. The main character prefers the old church with classical lines to modern ones. His spiritual director is a young, cassock-wearing Opus Dei priest. Most of the main characters met at Catholic Youth Day in Denver. NFP is discussed. There is a family with quite a few young kids with a homeschooling SAHM. Of course they say the rosary as a family nightly. Moms all breastfeed and attachment parenting and slings are big. In several spots in the book the characters are discussing religion, but IMO it comes off as phony.
What is the story? It is told through the eyes of a non-Cafeteria Catholic young man. It is mainly the story of his relationship with the mother of his child. It is also the story of his relationship with his best friend from college, who is now an organic farmer, married, with lots of kids. The friend's wife is the SAHM of course. Another main character is another college buddy who is your basic "typical" guy of that age who is living with his girlfriend and not really growing up. It is the story of an overaged adolescent who had to grow up in a hurry--and did. It is a story of self-sacrificing love.
In a lot of ways, I'm disappointed because this could have been a much better book with better editing. It almost seemed like the author had a list of points of doctrine or Catholic moral teachings that he wanted to include in the book, and after he outlined the story, he plugged them in. Some of the Catholic stuff seemed to be there just for the sake of putting it there--like when it mentioned that he always prayed for his parents as he passed the cemetery. That's nice, but so what? It really had nothing to do with the story, and there were plenty of other keys to his Catholic identity.
To compare this book to other books I've reviewed, it was a lot more like those Lori Wick books I've read recently than like the Francine Rivers books. Like Lori's Wick's characters, I found most of these to be too good to be true. I found many of the faith elements of the book to be preachy and not well-integrated into the story.
However, as mentioned earlier, it was a good story, and I recommend that Catholic readers give it a shot.
Posted by RAnn at 7:58 PM