Playing in the Kitchen

As I mentioned in the review post, I was provided with a review copy of this wonderful cookbook.  I tried several recipes I'd like to share with you.

Sally Lunn Batter Bread was easy to make and I think it tastes great, especially with honey butter.  My kids thought the shape was odd (it's baked in a tube pan) but that didn't bother me.  The texture is a little odd--the dough is a pretty standard yeast dough (maybe a little more liquid) but it isn't kneaded at all--that must be why, but it tastes like homemade white bread.  The recipe is here.

While chicken may be a low-fat dinner choice, this Nutty Oven-Fried Chicken is not.  But, it was good.  The recipe calls for a cut-up broiler or fryer, I used boneless skinless chicken breasts because my family doesn't like chicken skin and if I'm going to the trouble of making a coating for the chicken, I want it to be eaten, not discarded with the skin.  I served it with green beans and the Sally Lunn Bread.  The recipe is here. 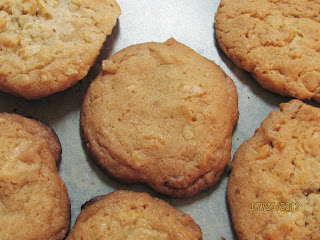 I can't get a new cookbook without trying a new cookie recipe.  These potato chip cookies had (as in they are all gone now) an interesting texture.  They contain butterscotch chips and I found them a nice change from the oatmeal cookies I usually use with the butterscotch.  Try the recipe for yourself.  Next time I make them I'm going to double the recipe, as I had half a bag of butterscotch chips and half a bag of potato chips left.

The final dish I tried this week was Runza.  You can see the recipe and a photo on Taste of Home's website. I've never heard of them but the cookbook said they were German-Russian and since my grandmother was German-Russian, I figured I'd try them.  I'm going to my Dad's tomorrow, and we'll have some for dinner.  I'll have to see if he remembers eating them as a kid.  They are like calezones but are filled with a mixture of hamburger, onions and cabbage.  My teen daughter and liked them.  My husband said they were good but too dry.  My son almost never likes new foods and didn't like this before he tasted it and my youngest basically said the same thing.  I didn't get a photo, but of course mine looked better than the ones Taste of Home shows.

The verdict:  I recommend the cookbook.  Click here to purchase.  The Kindle edition is available now; the hardcover won't ship until September.

Catherine M. Cassidy is Editor-in-Chief of Taste of Home. She is responsible for driving editorial direction and product strategy across the brand's media platforms. They include Taste of Home, the number one food and entertaining magazine in the world; TasteofHome.com; social media; special interest publications; and cookbooks. She also is responsible for editorial direction for the magazines Simple & Delicious and Healthy Cooking and Enthusiast Brands Birds and Blooms, Country, Country Woman, Farm and Ranch Living, and Reminisce.


Taste of Home is a go-to resource for the holidays and any time of the year for information on food, cooking and entertaining. Each year, thousands of great home cooks from across the United States and Canada submit more than 40,000 recipes, of which 3,000 are published in Taste of Home magazines and online, making Taste of Home one of the largest and most successful practitioners of user generated content. Before being published, every recipe is tested in the Taste of Home Test Kitchen to ensure that it can be prepared with affordable, everyday ingredients from regular grocery stores. Taste of Home content is available in print; online at Tasteofhome.com; in books; via digital download on iPad, mobile apps and Kindle; and Facebook, Twitter and Pinterest.

Cassidy has toured the country as the face of Taste of Home for national and local TV, radio, and newspaper interviews in support of the best-selling Taste of Home products, including its cookbooks.

Prior to joining Taste of Home, Cassidy served as Editor-in-Chief of Prevention magazine, the nation's largest health publication, at Rodale, Inc. Cassidy joined Rodale in 1986 as an associate editor in the book division, and was later named Executive Editor of Rodale's Custom Publishing division. She started her career at Runner's World and Fit magazines in Mountain View, California. Cassidy lives in Mequon, Wisconsin, with her husband and two daughters.

About Taste of Home