Wednesday was St. Joseph's Day, and here in New Orleans, particularly for those of Sicilian descent, that is an important day.  It is celebrated with parades and balls and altars.  This year my daughter's class sponsored the altar at school and she was chosen to play Mary. 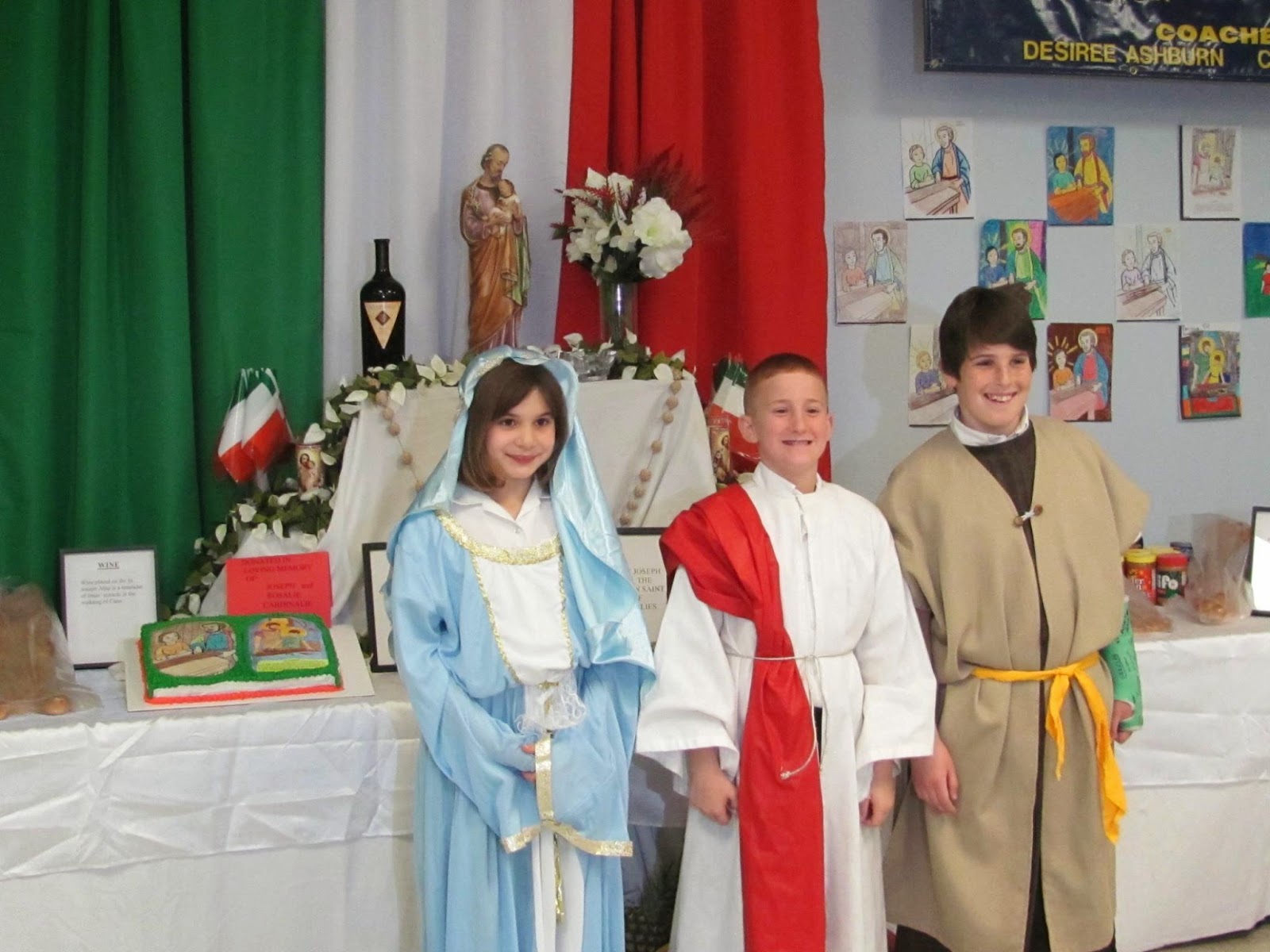 The custom of the St. Joseph Altar started in Sicily in a time of famine.  The people prayed to St. Joseph for help and rain came.  The grateful people took some of the fruits of the earth and arranged them on an altar to honor St. Joseph, and then donated them to the poor. Today in New Orleans the newspapers publish lists of altars and some people go from one to another.  Often food is offered to all who visit during certain times.   The non-perishable food from the school's altar went to the parish food bank; the perishable food (pretty much just the cakes) went to a nearby old folks home.

What does that have to do with my daughter being Mary?  Part of the St. Joseph's Altar tradition is the "Tupa Tupa", a term I'd heard before but had no clue what it meant.  Lucky for me, the newspaper had a picture of another school, with a short write up about the Tupa Tupa, so I knew the skit wasn't something invented by our school.  People are selected to represent Jesus, Mary, Joseph and the angels (we had shepherds too). St. Joseph knocks on three doors, looking for food and shelter for his family. (luckily the school cafeteria has three doors).

At each of the first two closed doors they try, someone inside asks, "Who is there?"

The response: "Jesus, Mary and Joseph."

"We seek food and shelter."

The response comes: "There is no room for you here."
When the Holy Family arrives at the third door, where the Altar is set, St. Joseph again knocks, and the dialog is repeated. But this time, when St. Joseph says, "We seek food and shelter," the joyful response is: "Welcome to this house. The table is set. The food is prepared. Come in and honor us with your presence."

After going inside, the Saints are treated to a meal that traditionally includes a taste of each item on the Altar. That meant my daughter got two chocolate chip cookies before her classmates got theirs. 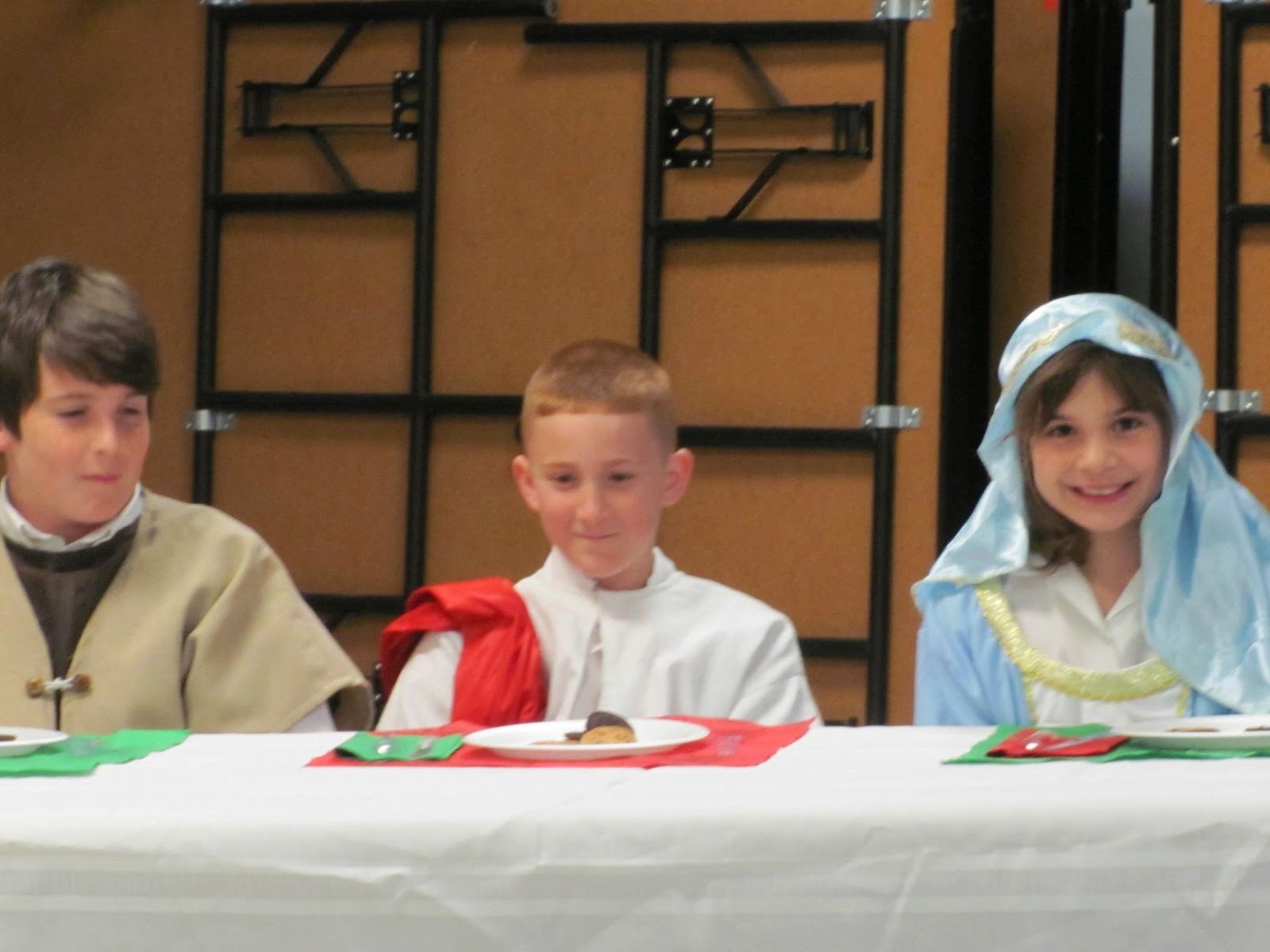 Compared with some, their altar was small, but I love the way the school is passing this tradition down to our kids. 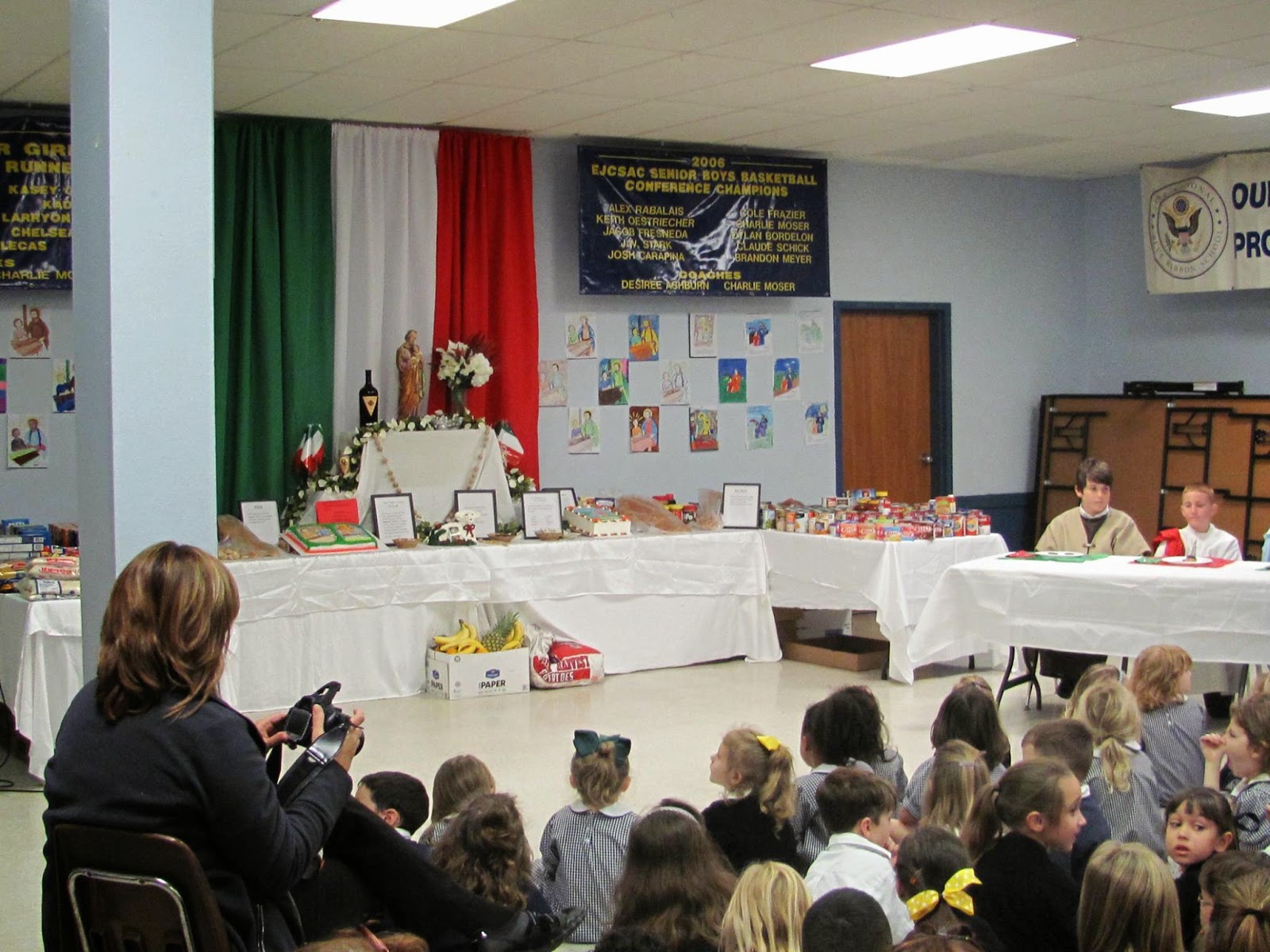 Even altars that don't offer a full meal (or those you don't get to when the meal is being served) usually offer you Italian cookies and a fava bean to take with you.  I'm guessing they figured the kids would prefer chocolate chip because that's what they gave away.

Some of the altars are really big and elaborate.  Here are some photos a friend took.  The first five are from one of the biggest altars in the area.  The last one is from an Italian ice cream parlor. 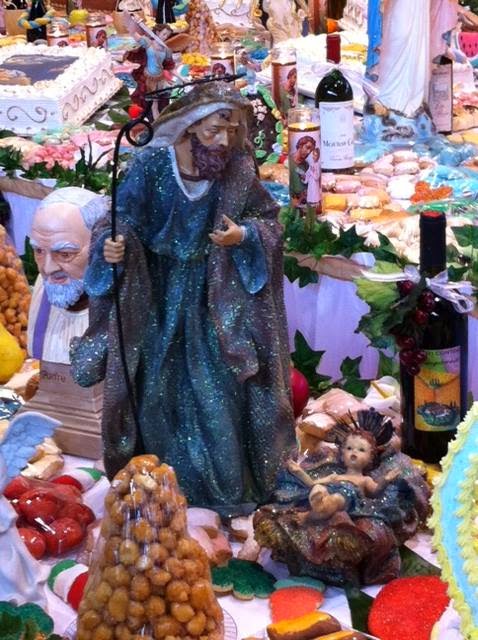 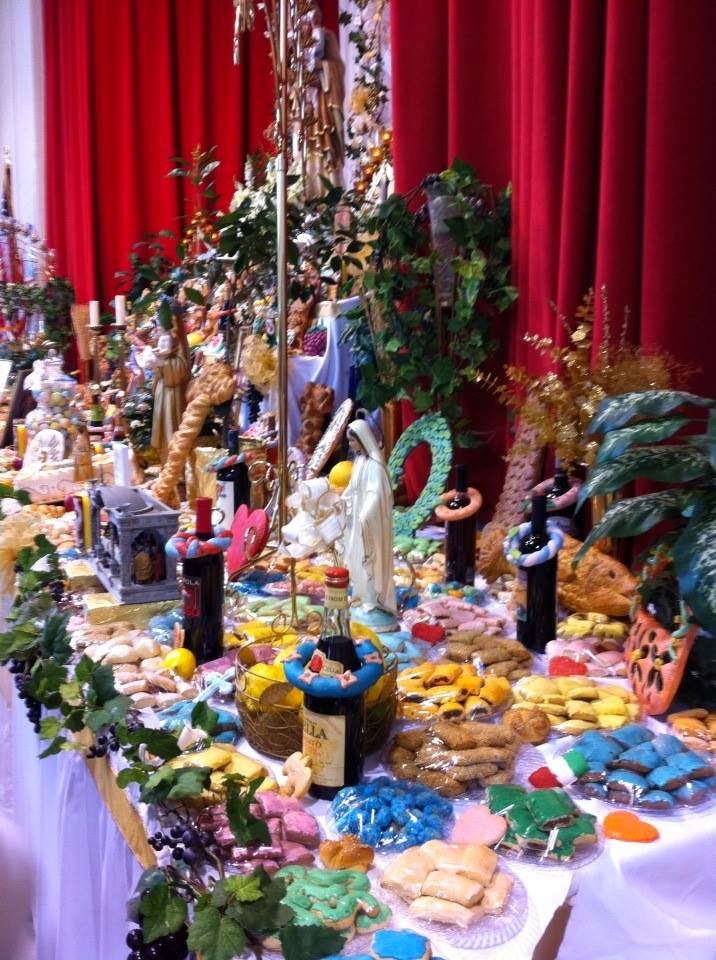 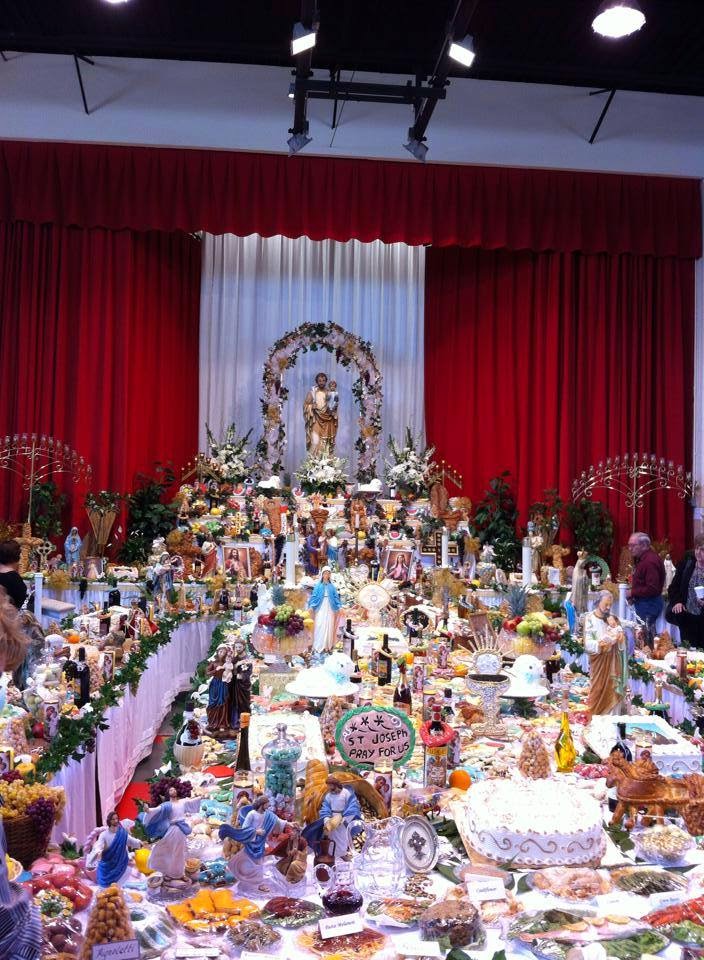 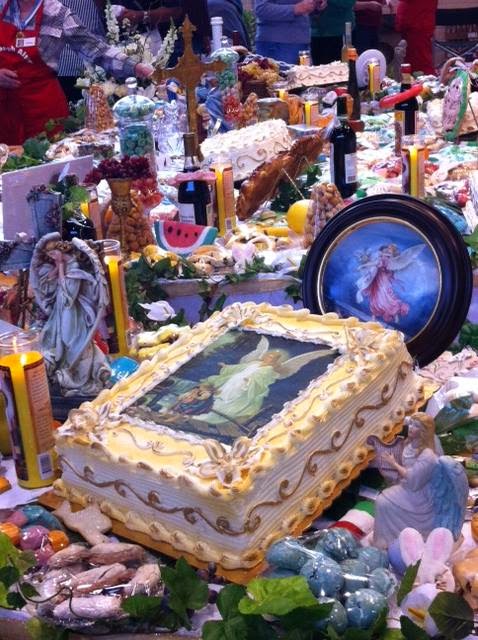 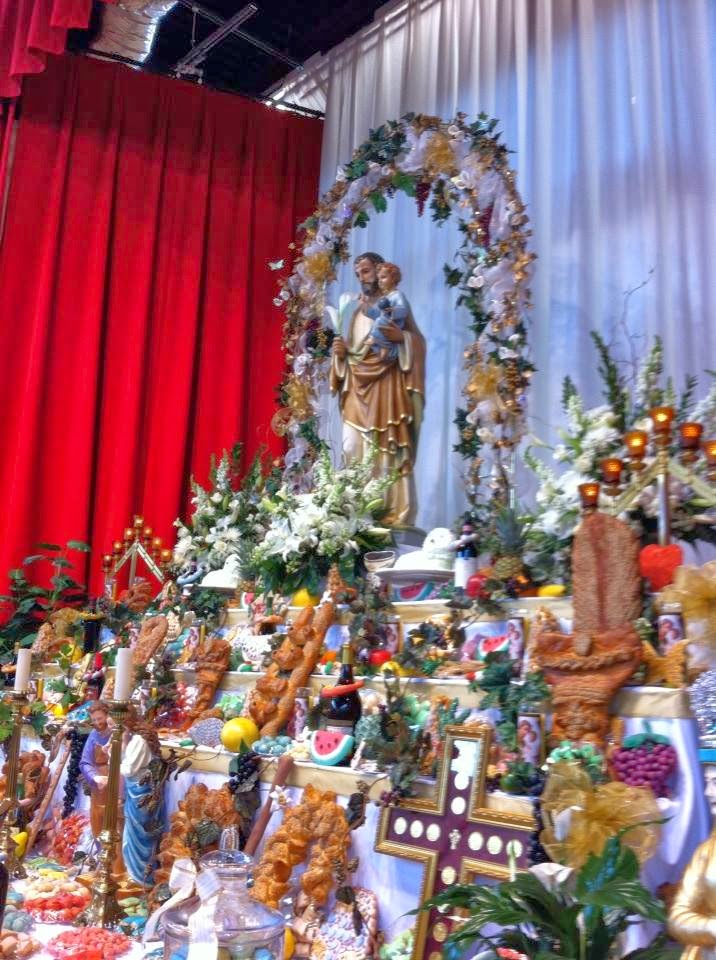 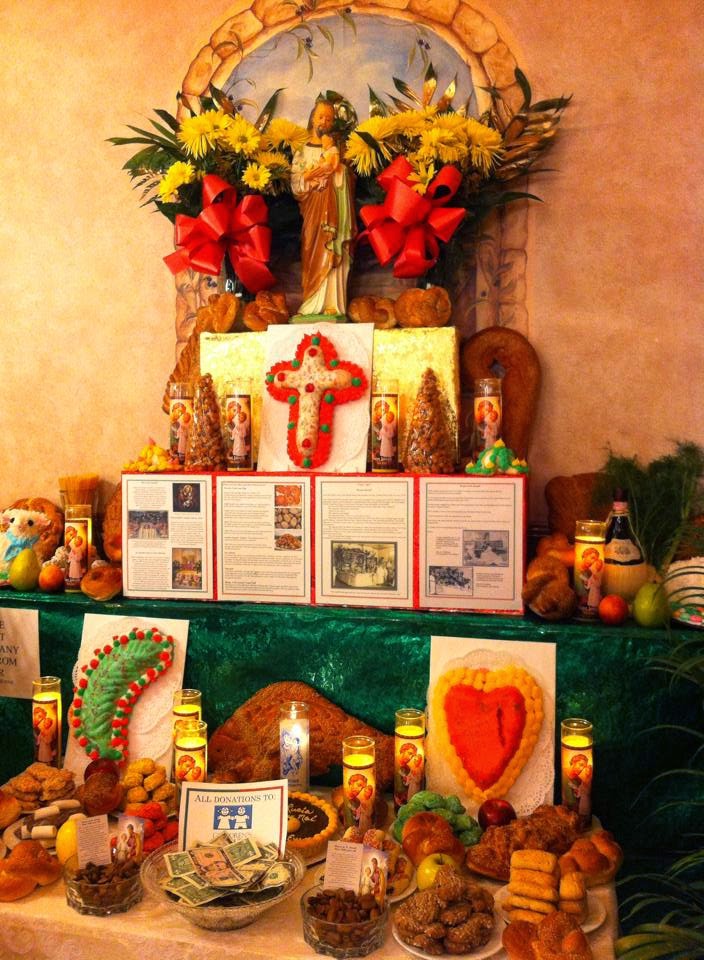