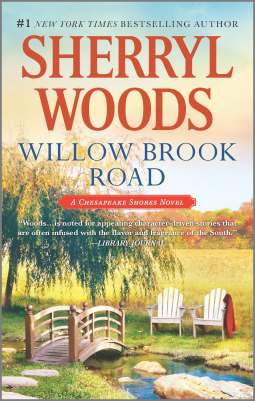 About the Book:
Spirited, spontaneous Carrie Winters has grown up under the watchful eyes of not only her grandfather Mick O'Brien, but the entire town of Chesapeake Shores.

Now that she's home from Europe, a glamorous fashion career behind her and her heart broken, there seem to be far too many people watching to see if she'll live up to the expectations her family has for her.

As if that weren't enough pressure, Carrie finds herself drawn to sexy, grief-stricken Sam Winslow, who is yearning for someone to help him raise the nephew who's unexpectedly come into his life after a tragedy.

With her own life in turmoil, is Carrie really ready to take on a new career and a new man? Or is Sam exactly what she needs to create the strong, loving family she's always wanted?

My Comments:
I enjoyed this trip back to Chesapeake Shores to visit with the O'Brien clan again.  Carrie and Sam are both at crossroads in their lives.  Carrie has returned home after breaking up with the boss/boyfriend she had in Paris, realizing that he meant far more to her than she did to him.  Sam never planned to marry, have kids, or put down roots until his sister died and left him custody of his nephew.  Carrie's large, nosey, loving, and interfering family has always been important in her life.  Sam was the son of an abusive family and his sister has been his only family for years--and he had chosen not to speak to her for a while before she died.  Sam is learning to be a dad; Carrie is a natural with children.  Sam is good at his job; Carrie is still trying to decide what to do when she grows up.  She has a plan, but will the plan be good enough for the family?

The major subplot focuses on a couple that was the focus of Beach Lane (click title for my review).  They have been trying to adopt a child and have had their hearts broken.  They are at that point in life when "everyone" they know is having children and Suzie especially feels a lack in her life.  I liked the way Sherryl Woods wove the stories of the two couples together.

The real star of this show however, was Bobby, Sam's nephew.  He too is looking for love and family after losing his parents.  Of course he is the one who gets all the best lines.

I'd like to thank the publisher for making a review copy available via NetGalley.  Grade:  B.
Posted by RAnn at 2:00 AM