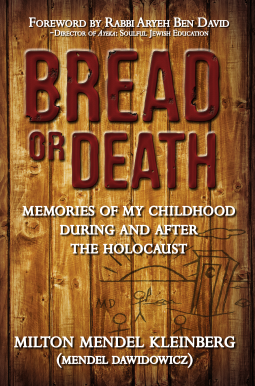 The war brought about scarcities of just about everything...except misery.
“Alle raise,” (everybody out), the German soldiers screamed as they pounded on our door with the butts of their rifles. And thus began a 4,500-mile journey from Poland through Russia and Siberia and eventually to Uzbekistan in Central Asia, as the author’s family used bribery and darkness of night to flee as the Nazis invaded Poland in 1939.

Young Mendel, from age four to fourteen, tells in vivid detail the wretched journey in cramped cattle cars through frigid Russia, the indignities of being forced labor, the shame of begging for bread just to survive, and death of those closest to him. The family’s plight includes abandonment, hunger, and separation (and later remarkable twists of fate and reunion) quite unlike other Holocaust stories.

This coming-of-age Holocaust memoir is the author’s personal account of how—through great sacrifices by his mother—he managed to survive the worst atrocities in human history and his uncertain days in a Polish Children’s Home, scrabbling for fallen fruit, and surviving kidnapping and murder on the Black Road, and return to German Displaced Persons camps at war’s end. But to what fate?

Originally written as a memoir just for his grandchildren, Milton Kleinberg gives a moving account of his family’s hardships and eventual immigration with a lump-in-the-throat passage to America past the Statue of Liberty and into a land of opportunity tinged with bigotry yet with a promise to future generations.

This book for young adults has been reviewed by the Institute for Holocaust Education and includes a glossary, a book club discussion guide, a timeline, and a Teacher’s Guide.

I see that this book has a lot of five star reviews on Amazon and it is a terrific story.  It is the story of the survival of a Jewish family during WWII and it is a story that lets us know that this was not the perfect family grabbed from an idyllic life and slaughtered by the Nazis.

Mendal's family was lower class and his father was an alcoholic with a wandering eye.  Still, when it came time to be deported when the Germans took over Poland, they got lucky and got shipped to Russia.  Yes, times were rough; no, they didn't have freedom, but the Russians weren't trying to kill them just because they were Jews.  Yes, some family members died, but it wasn't in gas chambers.

The blurb above says that the story was originally written as a memoir for the author's grandchildren.  It tends to ramble and to include a lot of repetitive information or stories that aren't central to the overall story; in other words, this is an old man's memories, not the polished work of a professional ghostwriter.  Still, I think it is a worthwhile addition to the body of work about how ordinary people lived, and died during that era.

I'd like to thank the publisher for making a review copy availble via NetGalley.  Grade: B+
Posted by RAnn at 2:49 PM