Review: Maggie's Fork in the Road 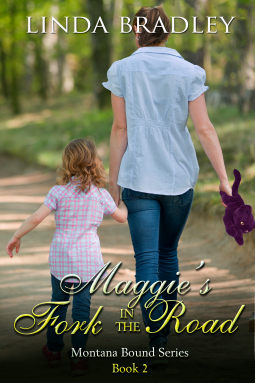 Maggie's Fork in the Road

Maggie Abernathy learns that pesky neighbors John and Chloe McIntyre are moving to Montana. The only problem is…she can’t fathom living without them now that they’ve stolen her heart. While trying to digest the news and accept John’s decision to leave Michigan, Maggie ventures to Chicago with Chloe to see Chloe’s Hollywood mother in a photo shoot, where the three kindle a quirky bond making it even harder for Maggie to say goodbye. With the support of Maggie’s meddling mother, her best friend Judy, and a surprise visit from Montana rancher Winston Ludlow McIntyre, Maggie begins to wonder which fork in the road leads home.

I'm about Maggie's age and I can't imagine what it would be like to find myself childless (her only child has moved across the country) and husbandless (her husband decided he was gay and left her) with a job I was enjoying less by the day (she's  a teacher and all the paperwork and testing is getting to her).  However, she has been invited to make a big change in her life--the guy next door, who has become more than a friend, has invited her to visit him in Montana, which is where he is from and where he wants to return.  It is obvious he hopes the visit will turn permanent.  Maggie has been through so much lately and just wants life to calm down.  She wishes John and Chloe would stay where they are--she doesn't want to lose them, or her life and it seems she will lose one or the other.

We see the development of the relationship between Maggie and John.  While we don't know how old he is, John is described as a pediatrician so he is at least in his early 30's.  He has a tattoo, which, especially among professional men is far more common for those in their thirties than for those in their 50's.  Since much is made of Maggie's hot flashes (and for no reason I can discern other than to firmly place her as in her fifties) I have to figure that this is an "older woman, younger man" romance.

Yes, this is a romance novel but it is the story of a slowly building relationship. Neither Maggie or John wants to rush into anything. There is attraction but they choose to live their lives, not spend them in bed.  There is one bedroom scene but it isn't graphic and refreshingly, neither Maggie or John is in a hurry to repeat it.

The book is the second in a series and the ending is kind of open-ended, but the fact that the series is titled "Montana Bound" gives a pretty clear indication of where things will end. Still, the book seems unfinished; it definitely leaves you wanting to read the next book to finish the story.

I'd like to thank the publisher for providing a complimentary review copy via NetGalley.  Grade: B.
Posted by RAnn at 5:19 PM