Son by Lois Lowry: My Review 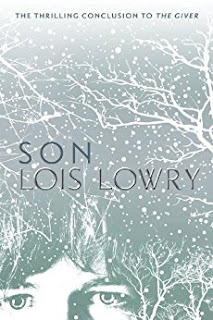 They called her Water Claire. When she washed up on their shore, no one knew that she came from a society where emotions and colors didn’t exist. That she had become a Vessel at age thirteen. That she had carried a Product at age fourteen. That it had been stolen from her body. Claire had a son. But what became of him she never knew. What was his name? Was he even alive? She was supposed to forget him, but that was impossible. Now Claire will stop at nothing to find her child, even if it means making an unimaginable sacrifice.

Son thrusts readers once again into the chilling world of the Newbery Medal winning book, The Giver, as well as Gathering Blue and Messenger where a new hero emerges. In this thrilling series finale, the startling and long-awaited conclusion to Lois Lowry’s epic tale culminates in a final clash between good and evil.

I found this one surfing through my library's Overdrive portfolio.  I had read the others in the series so I decided to read this.

For those not familiar with the series, it starts with The Giver, which is set in the future, after a catastrophic war.  The characters live in a technologically advanced community that has given up emotion and individual freedom.  No one suffers pain or want, and everything is decided for everyone.  Two of the characters in The Giver were Jonas and Gabe.  Jonas was chosen to be the only person in the community who was told of its history, and Gabe was a baby who could not conform--and we learn that in that community non-conformity was a capital crime, even if the "criminal" was an infant.

Son is the story of Gabe's mother--the woman who gave birth to him.  Certain young women were chosen to be birth mothers--it was their job for a few years to carry three "products" to maturity.  Once those products were born, they were raised in a community nursery for a year or so and then given to couples (the governement decided who coupled) to raise to maturity.

Gabe's mother had problems with the birth and was declared ineligible for future childbearing, but the powers that be forgot to tell her to take her hormone (and feeling) blocking pills and she seeks out her son.  She learns that he is no longer in the community and goes looking for him.

One of the characters is "Trademaster" who had caused disruption in the community featured in another book two of this series.  Basically, he would grant people's wishes, but in return would talk something valuable from them, and in doing so caused misery and dissention.  In Son he grants Claire's wish to see her son, but takes her youth.

At the end of the book Gabe confronts Trademaster and finds him to be pure evil, not human at all, and destroys him. I found that to be a throught-provoking conclusion.  Gabe started life in a community where no one had to trade--everyone was the same, all choices were made, suffering was absent. By destroying Trademaster, did he destroy evil?  Is it possible to destroy evil without destroying choice?

While there were parts of the book that dragged, overall I enjoyed it and give it a B.