Me, Myself, and I Am: My Review 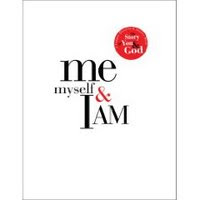 I won a copy of this book on Window to My World. When I got it, at first I thought I'd give it to my teen daughter as a Christmas gift. I may still, but I need to think about it. Basically the book is a collection of themed questions which lead the reader/writer to examine his/her life and relationship with God. The reader/journaller is asked questions about faith, religious practice, life experience, family and more. In some ways the book does take into account the Catholic experience of faith. There is a series of questions about the reader's experience with confessing sins, and besides mentioning confessing to God, one does mention confessing to a priest and receiveing absolution. Another question gives mass as one of the religous functions in which the reader could participate. There is a series of questions about your belief about the Bible, but I don't think any of the responses really capture the Catholic belief about the Bible.

Why do I hesitate to give it to my teen daughter? She is well-aware that there are other Christian faiths and non-Christian faiths. She also knows that people don't always do a good job of practicing thier faith. However, I'm not sure I'm ready to put a book in her hand (and thereby seeming to endorse it) that presents faith as a series of options rather than a series of facts. Also there is a section about "after you became Christian". Well, she became a Christian when she was six weeks old, when she was baptized. I know "accepting Christ" is seen as an affirmative and necessary step in some faith traditions, but as Catholics, we see His grace as a gift freely bestowed on us in baptism. It is a gift we can always reject, but rather than seeing our children as not Christian until they accept Him, we see them as Christian until they reject Him. I guess it is a matter of how much I'm willing to expose her to different Christian beliefs.
Click here to read the first chapter.
Posted by RAnn at 7:54 PM