Where Do We Go? A Mama Buzz Review 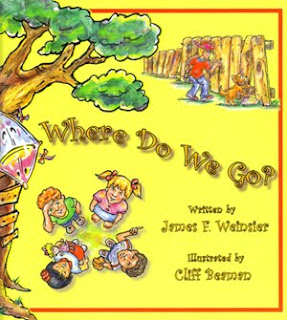 
The death of a loved one is difficult enough for an adult to understand and cope with; imagine how much more difficult it is for a child! Where Do We Go? delicately explores the theme of death in a child-friendly fashion with reassuring, thought-provoking text and cheerful illustrations. With compassion and sensitivity, James F. Weinsier addresses the age-old, complex question: Where do we go when we die?

In the words of Laura Duksta, author of the New York Times bestseller I Love You More, "Where Do We Go? Brings joy, play and ease to what is often an awkward conversation. Its message is a precious tool that will open the hearts and imagination of its readers to a greater awareness of love, life and beyond!"

Where Do We Go? is as helpful to children as it is to the adults challenged with the bewildering task of discussing death with them.


Born in New York City in 1945, James Weinsier was raised on Long Island. He received an Associates Degree in Applied Sciences from Nassau Community College in 1964, followed by service in the U. S. Navy. Upon completing his tour of duty, he resumed his education at the University of Miami, graduating with a Bachelor Degree in Business Administration. He is now retired and lives with his wife, in Fernandina Beach, FL.

Weinsier first grappled with writing in 1996, when in anticipation of his daughter's 21st birthday, he decided to give her something unique and straight from his heart. The result was a 100-page journal of special memories he and his daughter shared written in poetic verse. The manuscript was so well-received by his daughter that he published a 70-page book of thoughts for his father, Here…and Afterthoughts, and gave it to him for his 90th birthday. James continued to write, and three years after his first published work was released More…Thoughts was completed. This book contains 199 pages of sentiments commonly shared between parents and their children. James presented it to his father on his 93rd birthday-shortly before his passing.

In 2006, James experienced the devastating losses of three family members: his father, a son and grandson, Isaac Randolph, who died in a neonatal infant care unit from complications of necrotizing enterocolitis (an intestinal disorder) 10 days after his premature birth. In response to the pertinent questions from his other young grandchildren about what happens to us after we die, James wrote a children's book, Where Do We Go?, which was published in 2008.

"Wondrous" events took place a couple of weeks after the book's publication, which was two years after Isaac's death. On the exact month and day of Isaac's death and only a few minutes from the exact time of his death on that date, Weinsier's daughter gave birth to her second child, James Walter. Baby James was premature and followed his brother's path into the NIC Unit. Fortunately, his issues were not catastrophic, and on his 10th day of life, James W. was strong enough to go to his family's home in Kansas; while on the 10th day after Isaac's birth, he had passed away. Both boys went "home" on the 10th day...
My Thoughts:
This is a bright and colorful book written in charming verse.  It is a child wondering what the hereafter will be like.  Will it be winter all year, or summer, or some of each?  Will there be parks, video games, fireflies or bubblegum?  He finally concludes that our pets will be there with us (but doesn't name "there" as heaven or anything) and that "you really, truly never go anywhere, no matter what you do, Because forever you live in the hearts of all those who love you".  It's a cute book and good for starting discussions of the hereafter, according to family beliefs; however I find it interesting that the only definitive statement the author makes about the hereafter is that our pets will be there. 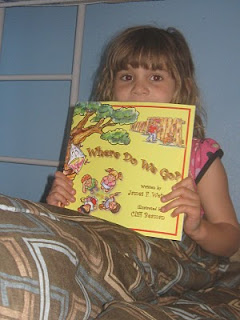 This is a Mama Buzz review.  A complimentary copy of the book was provided by Five Star Publications for this review.


To purchase from Amazon

(and give me a small commission)

Email ThisBlogThis!Share to TwitterShare to FacebookShare to Pinterest
Labels: Author: James Weinsier, Mama Buzz, Title: Where Do We Go?