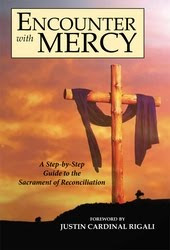 I've noted here before that I have a love/hate relationship with the Sacrament of Reconciliation a/k/a Confession.  Yes, I think it is a good idea.  Yes, I believe it is a gift from God to his Church.  Yes, I do think there is Biblical support for it.  No, I don't like going and yes, I generally feel great after I go.

Encounter with Mercy is a pocket-sized booklet sub-titled "A Step-by-Step Guide to the Sacrament of Reconciliation".  As it is only 60 pages, it can be read in an hour, and can be used as a reference guide thereafter.  It is easy to read, encouraging and yet challenging.  It includes stories about people whose lives were changed for the better by the Sacrament.  Ten reasons to go to confession are listed, as are ten things you can expect from confession.  Next listed, and described, are seven things expected from you in confession.  Since objections to the sacrament are frequent, seven of them are listed, and countered with scripture.  Folks my age missed out on a lot of the lists of things, like commandments, virtues, fruits of the Spirit, works of mercy etc. when we were in religion class.  The next section of this book gives quite a few such lists that Catholics should know (or at least know of). The main preparation for the sacrament (and in my opinion one of the least pleasant part of the whole operation) is the examination of conscience, and the book gives seven of them.  Once you've done that, you are ready to approach the priest, and there is a six-step guide about what to do once the door closes.  Finally you are given seven ways to promote confession.

I received a complimentary copy of Encounter with Mercy from The Catholic Company.  It is going to take up long-term residence in my purse.  Perhaps having it there will encourage me to do what I know I should do.
Posted by RAnn at 10:15 PM

Email ThisBlogThis!Share to TwitterShare to FacebookShare to Pinterest
Labels: Title: Encounter with Mercy