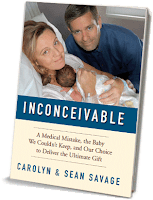 After a mistake at her infertility clinic, Carolyn Savage learned she was carrying another couple’s baby. In this memoir that belongs at the top of any truth-is-stranger-than-fiction list, she and her husband tell the tale of why they decided to go through with the pregnancy and deliver a healthy boy to the biological parents. (Basically, it’s because of their religious beliefs.) The book, which shifts between Carolyn’s and Sean’s perspectives, would have been better had biological parents Shannon and Paul Morell contributed, too. From the beginning, Carolyn seems to resent Shannon for not being sufficiently appreciative, and even after she says she is giving up baby Logan with no strings attached, she is peeved that Shannon sends her the same birth announcement “in the same way that she had announced him to her extended family and distant friends.” Ultimately, the Morells bring Logan to meet the Savages, but it’s unclear how often they will see each other.
My Comments:
I'm having difficulty with this review.  How much do I write about the book and its merits as literature and how much do I write about the authors?
I debated about accepting this book for review, since as a Catholic I believe in-vitro fertilization is immoral. I figured that the authors espoused a religion that did not so believe and that I'd be able to see their point of view, even if I didn't agree with it.  Unfortunately, I was wrong on both counts.  However, I'll be the first to admit that my beliefs about IVF may color my opinion about this book.
Some memoirs manage to tell the story without seeming self-absorbed; this one does not.  All the way through what we hear is that Carolyn and Sean wanted, and what they went through to get it.  Despite having two lovely boys, they wanted another child so they decided the Catholic church (for whom Carolyn worked as a school principal) was wrong in its teaching about in-vitro fertilization.  They chose IVF and had a beautiful daughter.  They didn't want to leave the spare embryos frozen (and they wanted another baby) so they underwent yet another IVF procedure and that's where the mix-up occurred.  During the pregnancy they hired a surrogate to carry the embryo the doctors didn't implant in her--thereby putting another woman through at least part of what she herself was experiencing.
I'm sure Carolyn and Sean are nice people and they have a beautiful family.  I'm really sorry for what they had to go through, and from what they wrote, I don't think the biological parents of the baby treated them well--but how does one treat a gestational surrogate?  The book itself is mildly compelling and definite reminder of all the things that can go wrong with procedures like IVF--things that range from the destruction of "unneeded" embryos to mix-ups like this one--and that doesn't being to address the issue of surrogate parenthood.

In the end, even though I should have been crying buckets for the wonderfully selfless thing Carolyn and Sean did in giving up the baby without a fight, I just didn't care.  I'm sure it is hard to write a memoir--a book about yourself -- without seeming self-absorbed or self-congratulatory, and this book is the  perfect illustration of that.  Grade:  C
Posted by RAnn at 10:21 PM