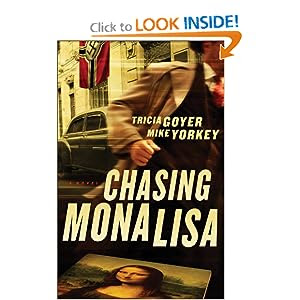 It is August 1944 and Paris is on the cusp of liberation. As the soldiers of the Third Reich flee the Allied advance, they ravage the country, stealing countless pieces of art. Reichsmarschall Hermann Göring will stop at nothing to claim the most valuable one of all, the Mona Lisa, as a post-war bargaining chip to get him to South America. Can Swiss OSS agents Gabi Mueller and Eric Hofstadler rescue DaVinci's masterpiece before it falls into German hands?

With nonstop action, Chasing Mona Lisa is sure to get readers' adrenaline pumping as they join the chase to save the most famous painting in the world. From war-ravaged Paris to a posh country chateau, the race is on--and the runners are playing for keeps.
Read an excerpt, watch a video and find out more here.

I enjoyed this World War II thriller about two Swiss agents and two French nationals who work together (sort of) to keep the Mona Lisa out of the hands of the retreating Nazis.  Within this thriller the reader is given information about the painting itself (it is painted on wood, not canvas, for one), about French politics of the era and about the German occupation of Paris during the war.  The four main characters make up two couples so there is a little romance involved, but it isn't a romance novel.  It is a fast-paced book with a happy ending.

While published by Revell, a Christian imprint, the book isn't the slightest bit religious--well, it did mention church bells, that one man was a minister and that one of the characters said a prayer (but readers are not privy to the prayer) and that there was a thanksgiving service at Notre Dame where DeGaulle said the Magnifcat .  I'd say it earns its "Christian" designation by being squeaky clean--despite the subject matter never is a swear word uttered, and the couples in question are clearly chaste.

The story grabbed me early into the book and kept me turning pages until it was over.  If I had to criticize the plot, I'd say that things worked out too well, but then I'm not a real fan of death, mayhem and sadness so  for me, that's not really a problem.

I'd like to thank the folks at Lifuse for providing a complimentary review copy.  You can see what other folks touring this book think by clicking here.

Have you ever wanted to be a spy?  In connection with this blog tour, a "Spy Pack" including an I-pod Touch is being given away.  See my post.

About the authors:
Tricia Goyer is the coauthor of The Swiss Courier as well as the author of many other books, including Night Song and Dawn of a Thousand Nights, both past winners of the ACFW's Book of the Year Award for Long Historical Romance. Goyer lives with her family in Arkansas. For more about Tricia and her other books visitwww.triciagoyer.com

Mike Yorkey is the author or coauthor of dozens of books, including The Swiss Courier and the bestselling Every Man's Battle series. Married to a Swiss native, Yorkey lived in Switzerland for 18 months. He and his family currently reside in California. For more about Mike and his other books visit www.mikeyorkey.com