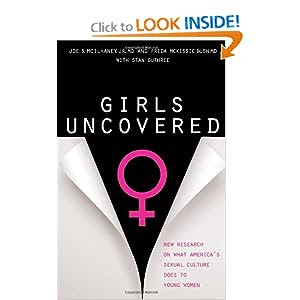 Girls Uncovered: New Research on What America's Sexual Culture Does to Young Women

About the Book:
Any parent can identify with the feeling that girls growing up in America face a treacherous future; Uncovered Girls unveils the facts. In a follow up to their eye-opening release, Hooked, obstetricians Joe McIlhaney and Freda Bush present stunning scientific research on the development of young girls in America's increasingly reckless sexual culture. They survey the reality of prevalent sexual behaviors and attitudes as well as their psychological, social, physical, and spiritual effects. Despite the harrowing facts revealed by their studies, McIlhaney and Bush give us hope through their expertise as physicians and parents of daughters. Girls Uncovered provides fundamental wisdom and practical advice to help parents, counselors, and church leaders guide young girls safely through the challenges they will face so they can achieve their potential and enjoy full health, hope and happiness.

My Comments:
I'm a middle-aged conservative mom.  "Cool" isn't a word generally used to describe me.  I don't dress or act like a teenager (but according to my teen daughter, that's a good thing).  Part of being not cool is that I think that regardless of your moral or religious beliefs, non-marital sex is just plain dumb.  The authors of Girls Uncovered: New Research on What America's Sexual Culture Does to Young Women

agree.  They make a convincing argument backed up by research (which is cited) that non-marital, particular early non-marital sexual activity, works against the goals girls set for themselves.  While girls say they want an education, a career, a stable marriage and children, non-marital sex can lead to pregnancy which derails educational and career plans, and makes a good marriage partner harder to find.  It can lead to disease which causes infertility.  It can cause you to develop relationship patterns that make it more difficult to develop the intimacy skills necessary for a good marriage.  Why then, with all these negatives, are our girls engaging in so much non-marital sex?

The authors go through the hormonal aspects of desire for sex as well as the physiological/psychological effects sex have on us.  In short, our bodies are programmed to want sex, and then, once we have it, it is natural for girls to feel closer to the guy.  Unfortunately the same is not necessarily true for men.

I liked the way this book took readers through the various lies that are told today, like "safe sex" and refuted them not with "The Bible (or Pope) says it's wrong" but rather "This study says that people who abstain from non-marital sex are more likely to achieve the goal you want".  The authors come right out and say "Sex before marriage is sexist"--the bad consequences are far more likely to happen to women--pregnancy, infertility, her caring more about him than he does about her"  They also point out that cohabitation is a bad idea.  Cohabitation before marriage is associated with a higher rate of marital break-up and cohabiting women have a higher rate of unplanned pregnancy than married women do.

While the book as a whole is addressed to parents, there is one chapter addressed to teen girls and my daughter will find herself gifted with it.

My only complaint about the book is that at times it seemed repetitive.  Still, it was an easy read full of good information.  Grade:  B+ . The authors are involved with this organization.

I'd like to thank the publisher for making a review copy available via NetGalley.