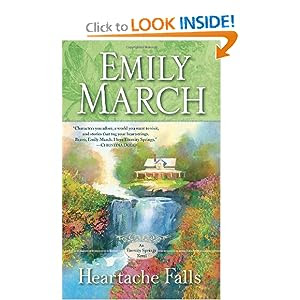 About the Book:
Married for more than twenty years, and with her children out of the nest, Ali Timberlake has come to Eternity Springs alone. She’s looking for answers to heartbreaking questions and searching for something that’s missing deep within herself. Taking a lease on the Bristlecone Café in pursuit of a lifelong dream, Ali feels revitalized as she becomes part of this charming mountain town. But a big piece of her is still back in Denver with her husband, Mac, a successful judge—and a man who isn’t going to let the woman he loves leave without a fight.

When Mac shows up in Eternity Springs—sexy, seductive, and determined to win his wife back—he experiences the wonder of the place that has given Ali such feelings of happiness and belonging. He wants that for her, but even more, he wants that with her. Ali has found a special place for her heart. But is there still enough room left in that heart for him?

My Comments:
I think Amazon recommended either this book or another in the series, so I requested it from my library.  It is a sweet re-romance--a story about a middle-aged married couple who find that life post-kids isn't what they had thought it would be.  She got pregnant in college and has spent her life as a stay at home mom.  He is an attorney who just became a federal judge.  She is the first to admit she is unhappy and to try to do something about it.  At first, he doesn't understand why she is unhappy.  By the end of the book...

I liked the fact that she really didn't know what was wrong at first, it took a lot of time for her to figure out why she wasn't happy, and then he was able to accept that.  It would have been so easy to make her husband a bad guy, but she didn't.  I wonder how many mid-life divorces could be avoided if those involved took time to figure out how they could change to make life better, rather than expecting that leaving a spouse will do that.

This was a sweet read, but one that was obviously part of a series (and I haven't read the other books). There were a lot of useless characters and references to some back story.  There was also a set-up for the next one.

There are a couple of intimate scenes but if you are looking for an instruction manual, you'll be disappointed. However, we are definitely there, not outside the door.

While no literary masterpiece this book was a pleasant afternoon diversion.  Grade:  B.
Posted by RAnn at 7:17 PM