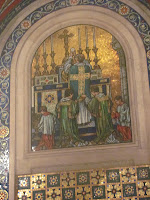 Question of the week: What spiritual gift do you want for Christmas this year?  My answer:  Faith, Lord, please increase my faith, because with increased faith I think the other gifts come.

Well, it's been quite a week for me.  When I'm not busy reading books, blogging or chasing kids or otherwise recreating, I'm working for a living.  I've mentioned here before that I'm a paralegal and that one of the attorneys for whom I work does criminal defense work.  We just finished a two week trial and sent the father of five kids, who had been in jail for over three  years,  home to his family.  The joy on that side of the courtroom was overwhelming, as was the sorrow and pain on the other side, where the victim's family sat.  If you go to NOLA.com and look for articles on David Warren you can read all about it, but the bottom line is that in the days following Hurricane Katrina a police officer shot a looter because he said he saw something in the man's hand that might have been a gun and the man did not stop when told to do so.  Later, another police officer burned the car containing the body.  Three and a half years ago, Warren was arrested.  Three years ago he stood trial with the officer who burned the body and others who were accused of covering up the shooting, and was convicted.  We appealed and the appeals court agreed that Warren should have stood trial by himself as there was no evidence he knew about the burned body or any cover-up.  This time he stood trial by himself and the story told at trial ended with a bloody body in the back of a car. This time we won.

I've had people ask me whether I think he was guilty.  My boss told me many years ago that his job was to defend his clients, not judge them, and I decided that if I was going to stay in this business, that was going to have to be my attitude too.  I will say that one thing I've learned over all these years is that criminal defendants are human--and I mean that in a good  way.  As kids we played cops and robbers and it was easy to get the idea that the crooks or bad guys were bad, only bad and not loved or lovable.   Criminal defense work teaches you that these people aren't all that unlike you and me.  They are brothers, fathers, husbands, and yes, just like me, sinners.  In this case the victim has a long rap sheet (which we were not allowed to put in evidence) but it was obvious that his family loved him and is hurt by his demise.  Please pray for both involved families; that they may find healing and peace.

I published two book reviews this week.  Just Like Other Daughters is about a woman with Down's Syndrome who falls in love and married.  Last Chance Knit and Stitch is a romance.
Posted by RAnn at 5:01 PM