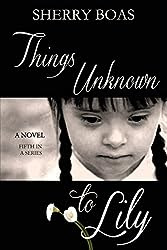 About the Book:
Charlotte was willing to accept whatever suffering came her way, just to be with the man she loves. But she could never have foreseen how difficult it was going to be to weather the louring tempests of her husband’s depression. Mystified by why her devotion is not enough to make John happy, she carries the burden of his sadness, unaware that it is a long-ago secret, kept from his aunt Lily, that prevents him from surrendering to the joy born of true love. Healing is about to come from an unlikely place, as it often does with anyone who has known Lily and grows to understand that something quite unexpected can change everything.

My Comments:
Lily and her family are back.  For those who haven't read the other books, Lily was a woman with Down Syndrome who made a profound (and good) difference in the life of her family.  This is the story of her nephew (whose mother conceived him so that Lily could have a child to help raise) and his wife.  John, the nephew suffers from depression.  His wife Charlotte is almost totally blind, and will be totally blind soon.  Charlotte wants to help John, but he won't let her in.  In the end, Lily is the answer.

I love Sherry Boas' writing, not only her stories, but her writing as well, and if you peruse this blog, you'll find that there are few writers about whom I say that.  She has a real gift in her use of language; if I had to guess I'd say she was a poet in a previous life, not a journalist (though in reality, she was a journalist).

While classified as religious fiction, Things Unknown to Lily is on the milder end of the spectrum.  The fact that the characters have faith is mentioned, and Mother Theresa makes an appearance but this is no sermon dressed as a story.  The faith elements are there, but they belong in the story naturally and for the most part did not feel forced.  It is definitely not a "find Jesus and life will be grand" book.

Fans of the series will enjoy catching up with members of the Lovely family but Things Unknown to Lily stands well on its own--you don't have to read the other books first, but they do add an additional dimension to the story.  I like it enough to give it an A- and if you've read this blog very long, you'll know that's high praise.

I'd like to thank Catholic Word for sending me a review copy of the book.  Catholic Word describes itself as " a one-stop resource for leading programs and religious titles from over 35 top Catholic publishers. For over 15 years, Catholic Word has built a reputation based on quality, personal relationships and a devotion to excellence in service."  The mission they espouse is "to build up the Church one soul at a time through top quality Catholic materials and resources. Wherever a person is on their faith journey, we offer real help to taking the next step closer to God. Our motto is to do the right thing, in the right way, for the right reason."  They claim to be "100% faithful to the teachings of the Magisterium".