Why I Am A Girl Scout Leader

Reading some Catholic blogs, one would get the impression that Girl Scouts of the USA is the last organization in which I would want my daughter participating or which any decent pastor should allow on parish property.  Yet, I am a proud Girl Scout parent and Girl Scout leader.  Why?

First, for the uninitiated, the problem some people have with GSUSA is that they claim it is a pro-abortion, pro-contraception organization.  There is a video clip showing the past CEO of GSUSA saying "We partner with churches...we partner with Planned Parenthood".  There is also a denied and disproved story about a UN conference and Girl Scouts advocating for abortion or contraception.  That proves it, doesn't it?  The video clip is real.  However, you have to understand the structure and organization of Girl Scouts.

Girl Scouts USA is the umbrella organization to which all American Girl Scouts belong.  Its job is to set policies and create program materials.  There have been complaints about the liberal bent of some of those materials and about some of the women praised in the material.  As a matter of fact, some of the materials were revised because of those complaints.  GSUSA does not partner with Planned Parenthood.

Under GSUSA are geographic councils.  These councils recruit and train leaders and provide programming.  Councils often partner with businesses or non-profits to provide programming.  For example, a local hospital system puts on science days where Girl Scout Brownies earn their Home Scientist badge.  The Microsoft Store offers free workshops where the girls earn the technology badges for their age level.  Some councils have worked with Planned Parenthood to develop materials or present programs for older girls.  My council has not and will not.  In councils that have, the money flow is from Planned Parenthood to Girl Scouts, not the other way around.  Also, Girl Scout rules require specific parental permission before discussing topics dealing the sex or sexuality.

Under the councils are individual troops, the groups to which most girls belong.  Again, Girl Scout rules require specific parental permission before sensitive topics are discussed.  Hypothetically, I suppose a troop could bring in someone from Planned Parenthood to speak, or could do service projects in support of Planned Parenthood, but it would have to be done with the knowledge and consent of the parents of the girls in that troop.

Is Girl Scouts a Pro-life organization?  No, it is "pro-choice" in that it recognizes that Americans have a variety of beliefs about abortion and that parents have the right to teach their daughters their beliefs on that and other sensitive topics.  That is why troop leaders must get specific permission to discuss them--so parents can decide if the troop leader is someone they can trust with that topic.  I work with five and six year old, and the topic hasn't come up.  I helped prepare fourth and fifth graders for their Catholic awards.  The topic of abortion did come up and the leaders' reponses were definitely pro-life.

Why Should I Believe You Rather Than What I Read?

It would not surprise me to learn that the non-Catholic organization most investigated by the Catholic bishops was Girl Scouts, and with good reason.  Girl Scouting is an important part of youth ministry in many dioceses, including mine.  The findings of the bishops are here.  The conclusion was "NFCYM strongly supports Catholic Girl Scouting and the use of Catholic religious recognition programs as a means to evangelize and catechize girls in Scouting programs."

But What Positive Reason Do You Have for Being Involved with Girl Scouts?

I am a Girl Scout leader because it is a way I can help provide a wholesome activity for the girls in our community.  I do it for my daughters and their friends, and for other kids.  I teach girls to be honest and fair, friendly and helpful, considerate and caring, courageous and strong, to respect themselves and others, respect authority, use resources wisely, make the world a better place and to be a sister to every Girl Scout.  I try to draw out shy girls, provide success experiences to those who don't get them in school, and to teach life skills.  One of my first Girl Scouts went to a different school than the other girls in the troop.  One day her  mother thanked me for allowing her daughter in my troop.  She said that her daughter did not have any friends at her school but that my girls had taken her in and that her daughter loved Girl Scouts.  The mother of one of my current Girl Scouts told me that as a result of having to learn her phone number for the Safety pin, her daughter was able to give a Disney cast member her mom's cell phone number when she got separated from the family at Disney World.

Why Don't You Join American Heritage Girls or Little Flowers or....

There are a lot of very good youth programs out there.  American Heritage Girls and Little Flowers are two that are often touted as alternatives to Girl Scouts as they are all-girl programs which can have much the same structure and activities as Girl Scouts, without any possible taint of abortion or contraception.  Why stick with Girl Scouts when there are alternatives?  For me, the answer is two part.  First, being a part of Girl Scouts gets me access to Girl Scout properties and Girl Scout activities.  Our Girl Scout camps are well-equipped facilites that cost my troop far less than similar facilities available to non-Girl Scouts.  Our council provides programming and facilitates leader cooperation between troops.  Our numbers give us advantages that other groups do not have.  The second reason is that as a secular organization Girl Scouts has a reach that exceeds that of explictly religous groups.  We have access to the public schools.  We recruit girls whose families never go to church.  We expose those kids to us and to our values, and, depending on the troop, to some religious programming.  In Girl Scouting I teach the values of our faith, even if the words are a little different.

What About Explict Religous Teaching?

We have that too, where appropriate.  There are patch programs teaching girls about women in scripture and models of faith.  There are major recongition programs that require the completion of a workbook and a service project.  Over 100 Girl Scouts in our archdiocese received those awards this year. 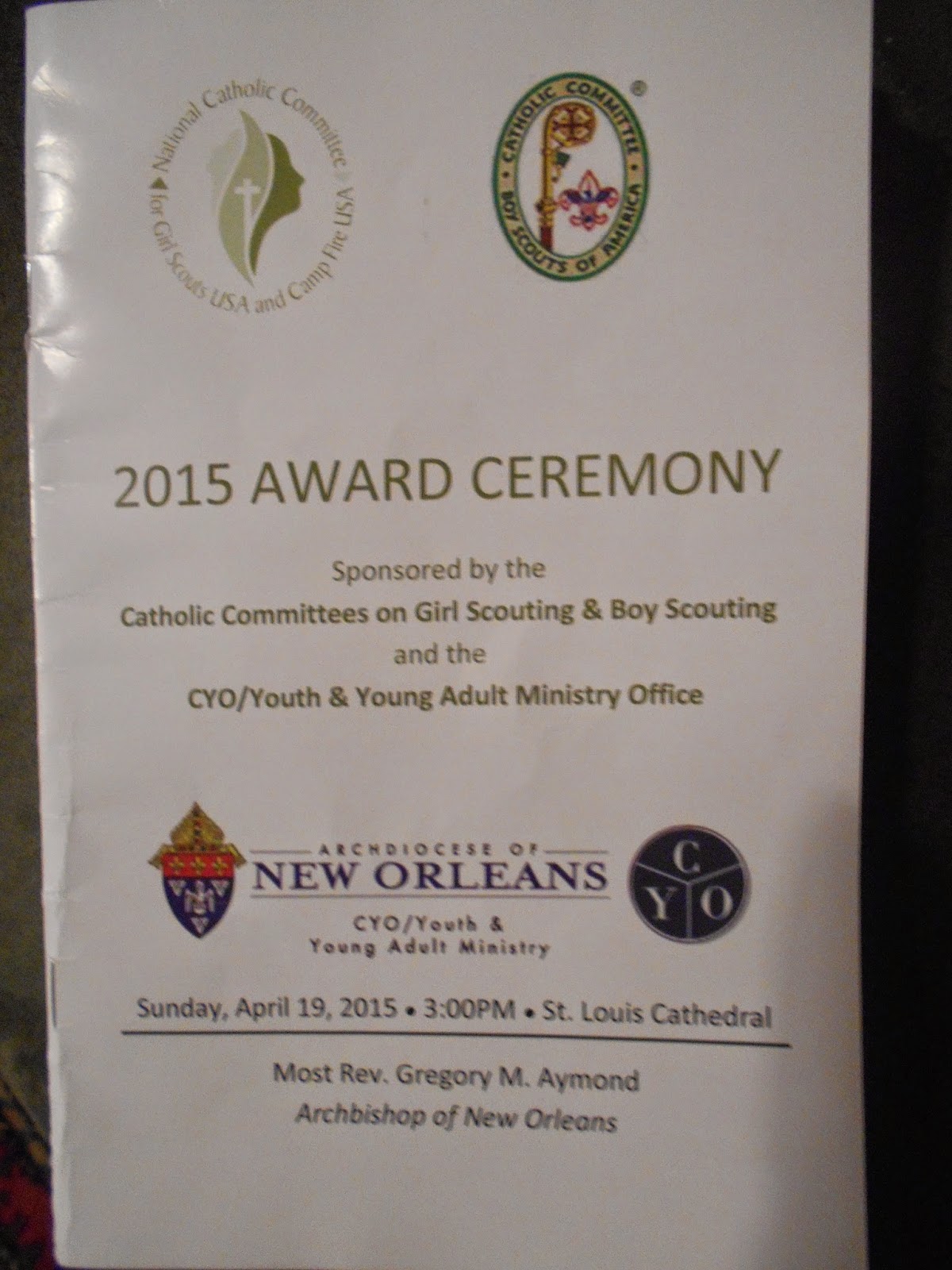 I'm proud to be a leader of young women involved in the largest all-girl organization in the US.  I'm proud of my daughter and her friends for earing their "I Live My Faith" award.  I'm proud of over twenty Girl Scout Daisies in my troop (kindergarten and first grade) who learned that the lily is a symbol for St. Joseph and that wheat is a symbol for Jesus.  I'm proud of girls who have gained confidence in themselves, have shown the courage to try new things, or who have developed their character through troop activities.  I'm proud to be part of an organization that tries to reach all girls.  On my honor, I will try to serve God and my country, to help people at all times and to live by Girl Scout Law.
Posted by RAnn at 11:05 PM