Book Review: The Sky Beneath My Feet 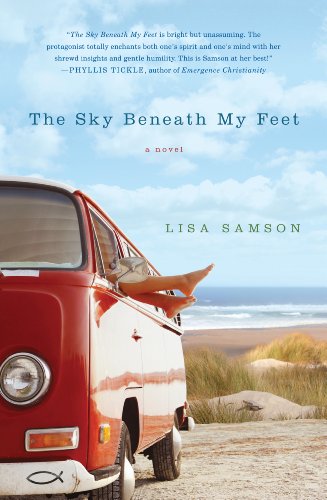 The Sky Beneath My Feet

Beth's husband won't be joining the family on vacation at the beach this year. He's not even joining them in the house. Instead, Rick has holed up alone in the backyard shed. Nobody knows exactly what he's up to. Maybe he's immersing himself in prayer. Maybe he's lost his mind. Maybe he's even the modern-day prophet or the saint the neighborhood artist imagines him to be. But while "St. Rick" waits for an epiphany, Beth will have to figure out what to do with herself and their teenage sons, possibly for the rest of her life.

What happens next is both uproarious and bittersweet: a peace march turns violent, her son is caught with drugs, and she embarks on an ambitious road trip that turns into something nearly surreal. Will Beth rediscover the idealistic woman she used to be, once upon a time? Can her marriage survive Rick's backyard vigil? Will anything ever be the same? And should it be?

Truthful, comic, heartbreaking, and magical in the very best sense of the word, The Sky Beneath My Feet gently tears the veil off our egos and expectations to reveal the throbbing, redemptive, and achingly beautiful life beyond and within us.

Lisa Samson is one of my favorite writers. She is one of the rare ones who can touch me with her language and use of words as much as with her story.

I've heard it said that a measure of a good story is that if it can speak to you about today even if the author had no idea about today when it was written.  Well, if you are reading this at some time other than July, 2020, let me tell you, today--this time in history--is anything but ordinary.  The country has been shut down (at least to some degree) for three months to contain Covid-19.  Lots of people, including my son, my daughter and her boyfriend, have been laid off from what were considered stable jobs.  Everyone is being encouraged to stay home, or, if they have to go out, to wear a mask.  If that wasn't bad enough, there have been several seemingly unprovoked killings of African-American men by police officers so "Black Lives Matter" is the mantra of the day and demonstrations and riots have been happening for weeks now. No, things aren't normal.

Beth is a minister's wife.  Her husband works as the "men's pastor" at a mega church.  It seems that his job is to go out with the guys--to go bowling, to ball games and to other places that men in the church gather, and to talk to them and minister to them and call them to a deeper relationship with God.  He wonders if that is what God wants of him.  Then an old friend who has moved to another town tries to hire him as pastor of their church.  To discern God's will for him, her husband, Rick, decides to do a 30 day silent retreat--in their garage, where he will not interact with family and friends.

Beth is left holding the bag to raise their two sons--and she is trying to figure out what she wants for her life--she had plans to be an attorney before she dropped out of school after getting pregnant with their oldest son.  She's been a pastor's wife and a  mother but who is she?

During the course of the book Beth meets a group of people who seem to demonstrate for the sake of demonstrating--some truly care about the cause of the day, others just like the process.  She also meets a woman who runs a skid row shelter and, in this book written before the phrase was cool, realized she was looking at it through the eyes of white privilege.

The book is very much about Beth and Rick's spiritual journeys as they approach a crossroad of life, so if you don't like religion in books, this probably isn't the one for you.  However, the spirituality about which Samson writes is not a feel good sacchrine sweet version.

This was a library book, I reviewed it because I wanted to and I'll give it a B+.
Posted by RAnn at 12:53 PM

Email ThisBlogThis!Share to TwitterShare to FacebookShare to Pinterest
Labels: 2020 book reviews, Lisa Samson, The Sky Beneath My Feet