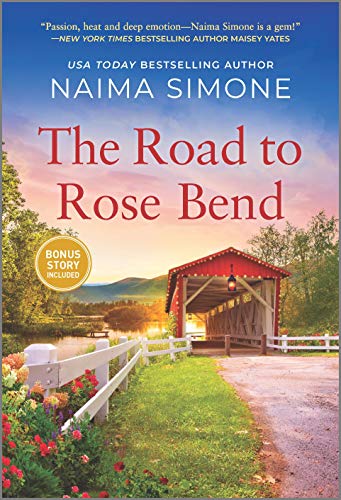 The Road to Rose Bend

Sydney Collins left the small Berkshires town of Rose Bend eight years ago, grieving her sister’s death—and heartbroken over her parents’ rejection. But now the rebel is back—newly divorced and pregnant—ready to face her fears and make a home for her child in the caring community she once knew. The last thing she needs is trouble. But trouble just set her body on fire with one hot, hot smile.

Widower and Rose Bend mayor Coltrane Dennison hasn’t smiled in ages. Until a chance run-in with Sydney Collins, who’s all grown-up and making him want what he knows he can’t have. Grief is his only connection to the wife and son he lost, and he won’t give it up. Not for Sydney, not for her child, not for his heart. But when Sydney’s ex threatens to upend everything she’s rebuilt in Rose Bend, Cole and Sydney may find that a little trouble will take them where they never expected to go.

If you were looking for a sweet relatively clean romance, the cover of The Road to Rose Bend could make you think you'd found one, but you would be wrong.  While I enjoyed to story of Cole and Sydney, it was a very "physical" book.  The word "dick" was used 18 times in the book, and most of those references were not during bedroom scenes.  There were several bedroom scenes and they were vivid enough to serve as tutorials.
Those looking for diversity in reading material may be interested in knowing that Sydney is Black and Cole is Puerto Rican (but adopted by a family of Irish heritage).  While his heritage is explicitly made clear early in the book, I was quite a ways into the book before I realized that she was African-American.
I liked both Cole and Sydney and enjoyed watching them let go of old hurts and learn to love again but I didn't like all the crude references to male anatomy nor the front row seat on the bedroom action.
Thanks to the publisher for providing a review copy via NetGalley.  Grade: B-