Review of A Song for the Road by Kathleen Basi 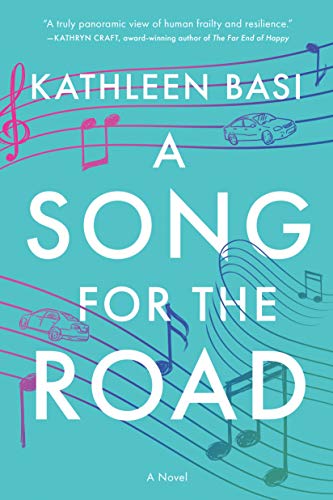 A Song for the Road

It's one year after the death of her husband and twin teenagers, and Miriam Tedesco has lost faith in humanity and herself. When a bouquet of flowers that her husband always sends on their anniversary shows up at her workplace, she completely unravels. With the help of her best friend, she realizes that it's time to pick up the pieces and begin to move on. Step one is not even cleaning out her family's possessions, but just taking inventory starting with her daughter's room. But when she opens her daughter's computer, she stumbles across a program her daughter has created detailing an automated cross-country road trip, for her and her husband to take as soon-to-be empty nesters.
Seeing and hearing the video clips of her kids embedded in the program, Miriam is determined to take this trip for her children. Armed with her husband's guitar, her daughter's cello, and her son's unfinished piano sonata, she embarks on a musical pilgrimage to grieve the family she fears she never loved enough. Along the way she meets a young, pregnant hitchhiker named Dicey, whose boisterous and spunky attitude reminds Miriam of her own daughter.
Tornadoes, impromptu concerts, and an unlikely friendship...whether she's prepared for it or not, Miriam's world is coming back to life. But as she struggles to keep her focus on the reason she set out on this journey, she has to confront the possibility that the best way to honor her family may be to accept the truths she never wanted to face.
Hopeful, honest, and tender, A Song for the Road is about courage, vulnerability, and forgiveness, even of yourself, when it really matters.

I'm writing this post a week after a man who was very dear to my girls when they were babies was buried, a few days after the mom of a high school classmate--the mom who allowed homecoming floats to be built at her house for six years straight (which meant that she had 50+ teens there every night for a week)--was buried and the day after I heard that my pastor's mom died.  Despite the fact that we are in the holiday season, despite the fact that we are no longer close to that man, that the classmate was never a close friend of mine and that I'd best characterize my pastor as an acquaintance, having three deaths touch me during this supposedly joyful time of year has got me tearful.
How awful must it be to lose your whole family is one split second?  That's what happened to Miriam a year ago, and though she has buried much of her grief for the last year, something happens and now she knows she has to deal with it--and, as noted above, finds a program her daughter designed with the idea of sending her and her husband on a road trip.
As Miriam travels across the country we learn about her family history and why things were not exactly how they appeared to outsiders.  We "see" some attractions that are not at the top of most people's "must see" list but which are interesting and charming in their own way (I've been to one of them several times, guess which one).
The author, Kathleen Basi, is a composer and musician, along with being a writer, and she has made music a part of the story.  Miriam's son was a composer and left an unfinished piece, and she, who has spent her adult life as a church musician, is trying to finish it.  Basi uses terms known to musicians and which brought back memories of the piano class I took one semester in college, though I hadn't a clue what they meant--I just translated those passages as "she's writing fancy music now" and let it go at that.  Hopefully the words would mean more to a musician.  Her son's music wasn't the only unfinished business in the book, and Miriam's journey leads her to confront and deal with at least two big unfinished things.     I loved watching her journey not only through the country but through her grief and into the lives of others.
I'll be the first to admit that my opinion of the book may be affected by the fact that the author, Kathleen Basi, is someone I've gotten to know via the internet.  I've watched her kids grow up and discussed the challenges of parenting special needs kids.  I've followed the Facebook page on which she has shared her progress with this book and now I'm glad to give this book an A, because it was an engaging read that touched my heart.
I'd like to thank her publisher for making a review copy available via NetGalley.
If you click on the book title in the labels below, you can read other things I've written about the book.
Posted by RAnn at 12:37 AM

Email ThisBlogThis!Share to TwitterShare to FacebookShare to Pinterest
Labels: 2021 Book Review, A Song for the Road, Grade: A, Kathleen Basi, NetGalley