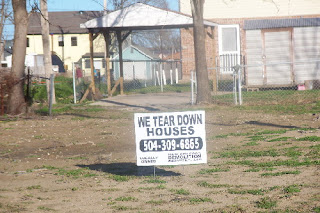 The tear down sign is on a now-empty lot.


Below is a FEMA trailer. I don't know how long this has been there, but a family on my block was in one for over a year. 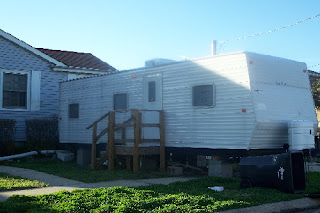 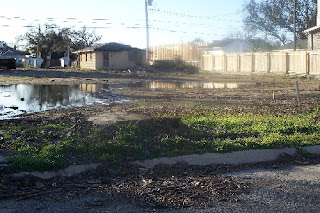 To the left is a series of empty lots caused by tear-downs.


People from other places ask me about the recovery from Katrina. Some almost sound like they think we are still underwater; others sound like "Isn't that over yet??". Neither one is right. I live in Jefferson Parish. If you remember the pictures after the storm of the 17th Street Canal--one that was breached--you may remember one shot showing water on one side of the canal, and dry streets on the other. Later there was a shot showing lights on one side, dark on the other. I live on the dry, light side. The Katrina problems in this area had to do with shingles blown off roofs, fences blown down, tree limbs in windows and floods from rainwater. The flooding on this side of the canal happened because the pumps were turned off during the storm because the operators were evacuated. Lots of houses got a few inches of water in them, water that went down pretty quickly, but which caused more damage than is normal during a flood because no one was around to clean up the mess. However, people in this area are pretty much middle or upper class homeowners with good insurance policies. The insurance companies came in after the storm, adjusted the claims, paid them, and paid supplements as it became obvious it was costing more than normal to effect repairs. Basically people had to take out the floors, the baseboards, the door moldings, the interior doors, and four feet of sheetrock. They lost a lot of furniture, though expensive furniture was generally salvageable if it wasn't upolstered. In short, most people's insurance settlements were big enough to do the work and they weren't in a position of having to replace everything they owned. A few weeks ago the parish government started putting notices on FEMA trailers telling people that unless they got special permission, the trailers needed to be removed by March 1. Permission will be granted to anyone who can show they are still working on thier house; they are trying to make sure people aren't renting out those trailers and they are trying to encourage people to get this over with. People are tired of looking at those trailers in their neighborhoods and most people are done with them.

Contrast this with the other side of the canal. People there got six feet of lake (salt) water in their homes, and it stayed for weeks. By the time they got home, none of their possessions were salvageable (at least none on the first floor). While there were plenty of well-insured folk over there, there were also people who skimped on it as money was tight and they didn't live in an area that flooded. There were also some who inherited homes, and just flat didn't have the money for insurance. Many of those who had their homes insured to what they considered full value at the time found that thier insurance payments (even if for policy limits)weren't enough to rebuild in the current market. Also they had to make decisions about whether a bulldozer was an integral part of their recovery plan. For these reasons and more, recovery on that side of the canal is much slower.

I drove over there today and I'm going to share some pictures with you.
Posted by RAnn at 8:47 PM