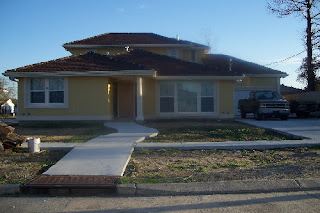 There are a few signs of recovery, this is a new house in Gentilly 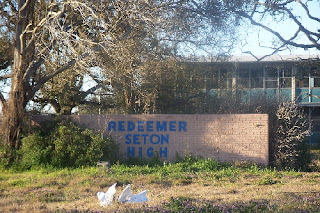 This Catholic high school is not reopening. Holy Cross High School wants to buy the property, tear down the buildings and start from scratch; however there is a church on the site that they are having trouble getting permits to tear down. 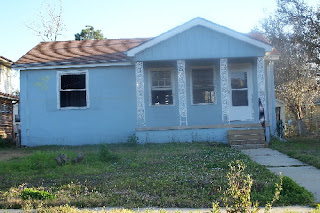 This house near the church/school property is vacant, as is much of the neighborhood. 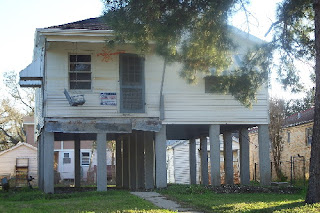 I guess these people don't want to flood again. 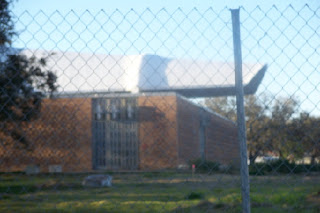 This church, St. Francis X Cabrini, was designed by the same company that designed the Superdome. The Archdiocese wants to sell the property to Holy Cross High School, but Holy Cross cannot use FEMA money to demolish architecturally significant buildings, and someone filed something to get this church so declared.

Forgive me, but these posts are out of order because blogger thinks differently than I do. These photos are from Gentilly, an area of the city that was probably developed after WWII. It has suburban-style houses, mostly slab on grade rather than raised, and the houses have yards. Before the storm it was a mixed neighborhood, becoming more African-American all the time. I'd say it was working/middle class. At this time there doesn't seem to be a lot going on. More houses look empty than like they are being worked on. There aren't a lot of FEMA trailers. The story with the church/school is that Holy Cross, which is now in the Lower Ninth Ward wants to move. They had a lot of meetings and finally chose this site over one in the suburbs, probably at the urging of the Archdiocese. It was seen as something to anchor this neighborhood. At this time the church is probably salvageable, though I understand the roof had been a maintenance headache for years. At this time the parishioners are "clustered" with neighboring parishes. The idea is that as people return and there is need for more churches, more will be opened. The parishioners of St. Francis Cabrini voted to sell the property but some people took offense at the idea of tearing down the church and filed papers to get it declared architecturally significant. Since FEMA won't pay to demolish such buildings, everything is on hold until that is sorted out.