Ok, maybe I'm not the best speller in the world, but my spell-checker was no help.  The title is supposed to be negative expression--a more colorful version on "no". 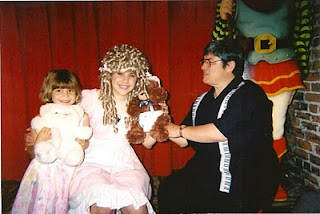 Here in Kenner, we have a small intimate theater called The Children's Castle.  It looks sort of like a castle from the outside, and inside there is a small stage that is only a step up from the floor.  As the name implies, it is geared toward children and most Saturdays they have some type of live performance.  A few weeks ago my six year old and I went to see her Godmother's daughter play Goldilocks.  The girls are crazy about each other (well at least my daughter is crazy about E) and my daughter knew we were going to see her friend play Goldilocks.

The show consisted of Goldilocks on stage telling the story, with a few props and the piano player behind her providing sound effects.  Chairs for children were right by the stage and my daughter was front and center.  The story was told using the conventional plot line until almost the end.  However, instead of saying that she jumped out of the bed and ran away, Goldilocks explained that most people got that part of the story wrong, and that she wasn't scared, and that Baby Bear became her little brother, at which point my daughter said "Nu-uah" and Goldilocks replied "uh huh".  I asked her later if this had ever happened before, and of course, it hadn't.
Posted by RAnn at 12:51 PM