Monday is Mailbox Monday Day, when book bloggers brag about the books they acquired the previous week.  It is hosted this month at Library of Clean Reads. 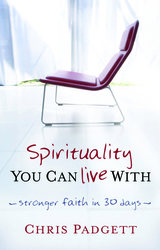 Spirituality You Can Live With
Can you still be spiritual dealing with life’s daily grind? Do you sometimes lose hope amid the chaos of your daily routine? Chris Padgett has some practical help for you – a low-key guide for those interested in habits of holiness they can actually maintain amid the frantic pace of daily life. Thirty lively chapters geared to the busy person cover the essentials of the faith -- from brokenness and repentance to joy, dryness in prayer, and loving yourself and your neighbor. Features questions for reflection that help you make the content your own.

From The Catholic Company, for review.

Following Jane Austen Ruined My Life and Mr. Darcy Broke My Heart, Beth Pattillo returns with her new novel. Inspired by Sense and Sensibility, The Dashwood Sisters Tell All follows two modern-day sisters as they set out on a walking tour of Jane Austen's England and uncover what might actually be Jane's long-lost diary.

Ellen and Mimi Dodge have never been close, but their mother's dying wish sends them on a walking tour of Hampshire, England, that follows in the footsteps of Jane Austen. Their mother also left them something else: a diary that belonged to Jane's sister Cassandra. These pages shed light on the secrets that nearly tore the Austen sisters apart and inspired one of the greatest love stories of all time. They also bring Jane to life in a way that no one has ever seen before: through the eyes of her sister. As the Dodge sisters embark on their walking tour, they too are drawn together in ways they never expected. They also discover that Cassandra's diary holds secrets, and someone doesn't want Ellen and Mimi to discover the truth. As they stumble on their way toward love, the women learn how Jane and Cassandra Austen inspired the original Marianne and Elinor Dashwood and come to realize that despite their very different personalities, they are a vital part of each other's happy endings.
From the publisher, for review

DeHart pairs up a bluestocking and a spy in the third Legend Hunters Victorian romance (after Desire Me and Seduce Me). When scholarly Vanessa Pembrooke travels to Loch Ness to hunt fossils, she accidentally marries Graeme Langford, one of the secretive "Legend Hunters" of Solomon's in London, who's on the trail of the Stone of Destiny. Their mutual love of adventure complements their growing physical attraction, and soon Vanessa is caught up in Graeme's quest to save the stone from a ruthless villain called the Raven. DeHart delivers plenty of adventure and suspense along with the romance: secret passages, ancient encoded texts, and a double helping of theft, blackmail, kidnapping, and murder.
From the publisher--I signed up for another tour they were offering and this was in the envelope too, we'll see....

Ramsay's delicious contemporary debut introduces the town of Last Chance, S.C., and its warmhearted inhabitants. Down to her last five bucks, beautiful runaway Wanda Jane Coblentz heads to the town watering hole and picks up local fiddler Clay Rhodes, figuring that a night at the local no-tell motel beats sleeping on a park bench. When Clay catches her going through his wallet, he dumps her purse out and discovers ID for somebody named Mary Smith. Talk about getting off on the wrong foot! Jane, aka Mary, reveals that she's on the run from a shady, possibly dangerous past. Despite her sketchy behavior, Clay falls in love with her, and soon he and his mother are scheming in fine style to give Jane a last chance of her own. Ramsay strikes an excellent balance between tension and humor as she spins a fine yarn.    From the publisher for a blog tour.
NetGalley brought me a few

Hannah Robinson is just about to open the doors to her new shop Cupcakes on the Corner when out of the blue her boyfriend Patrick announces that he's leaving her for another woman. Faced with starting a business on her own, Hannah begins to wonder if her life-long dream has just turned into a nightmare. So her best friend Adam sets his birthday as a deadline - seven months to make her shop a success, or walk away from it all. And as Hannah immerses herself in her new business, she soon discovers that she's too busy to think about Patrick and his now pregnant girlfriend ...or to notice an increasingly regular customer who has recently developed a sweet tooth for all things cupcake. But while Hannah is slowly piecing her life back together, family friend Alice's is falling apart. Her husband Tom's drinking is getting out of control and things are about to get a whole lot worse. As the seven-month milestone approaches, Hannah must decide her future. And while she's figuring out what's really important, it becomes clear to everyone that happiness in life, and in love, is all in the making.

As a boy, James Twitchell heard stories about his ancestors in Louisiana and even played with his great-grandfather's Civil War sword, but he never appreciated the state and the events that influenced a pivotal chapter in his family history. His great-grandfather, Marshall Harvey Twitchell, a carpetbagger from Vermont, had settled in upstate Louisiana during Reconstruction, married a local girl, and encountered much success until a fateful day in August 1874. The dramatic story of the elder Twitchell's life and near assassination fuels the author s pursuit of his family s history and a true understanding of the South.
In Look Away, Dixieland, Vermont-native Twitchell sets out from his current home in Florida on the inauguration day of America s first black president to find the real South and to try to understand the truth about his illustrious ancestor. He travels in an RV from Georgia s Okefenokee Swamp across Alabama and Mississippi to Coushatta, Louisiana. As he drives through the heart of Dixie, Twitchell sorts through the prejudices he learned from his northern rearing. In searching for the culture he had held at arm's length for so long, he tours small-town southern life in campgrounds, cotton gins, churches, country fairs, and squirrel dog kennels and uncovers some fundamental truths along the way. Notably, he discovers that prejudices of race, class, and ideology are not limited by geography. As one man from Georgia mockingly summed up North versus South stereotypes, ''Y'all are rude and we re stupid.''
Unexpectedly, Twitchell also uncovers facts about his great-grandfather and sheds new light on his family's past. An enlightening, humorous, and refreshingly honest search, Look Away, Dixieland reveals some of the differences and similarities that ultimately define us as a nation.

A quiet tour de force, Chris Bachelder's Abbott Awaits transforms the ordinary into the extraordinary, startlingly depicting the intense and poignant challenges of a vulnerable, imaginative father as he lives his everyday American existence.
In Abbott we see a modern-day Sisyphus: he is the exhausted father of a lively two-year old, the ruminative husband of a pregnant insomniac, and the confused owner of a terrified dog. Confronted by a flooded basement, a broken refrigerator, a urine-soaked carpet, and a literal snake in the woodpile, Abbott endures the beauty and hopelessness of each moment, often while contemplating evolutionary history, altruism, or the passage of time.

An expectant father and university teacher on summer break, Abbott tackles the agonizing chores of each day, laboring for peace in his household and struggling to keep his daughter clean and happy, all while staving off a fear of failure as a parent, and even as a human being. As he cleans car seats, forgets to apply sun block, clips his dog s nails, dresses his daughter out of season, and makes unsuccessful furniture-buying trips with his wife, his mind plays out an unrelenting series of paradoxical reflections. Abbott's pensive self-doubt comes to a head one day in late June as he cleans vomited raspberries out of his daughter s car seat and realizes: The following propositions are both true: (A) Abbott would not, given the opportunity, change one significant element of his life, but (B) Abbott cannot stand his life.

It's Monday, What Are You Reading is hosted by Sheila over at Bookjourney.  She asks what we read last week and what we plan to read this week, and for what we reviewed last week.  Well, no reviews this week--I wrote plenty but publishers asked that they not be published yet, so this coming week  you'll get several reviews.  As for what I read: