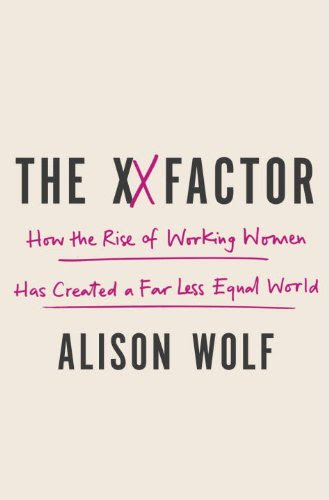 The XX Factor: How the Rise of Working Women Has Created a Far Less Equal World

About the Book:
The gender gap is closing. Today, for the first time in history, tens of millions of women are spending more time at the boardroom table than the kitchen table. These professional women are highly ambitious and highly educated, enjoying the same lifestyle prerogatives as their male counterparts. They are working longer and marrying later—if they marry at all. They are heading Fortune 500 companies and appearing on the covers of Forbes and Businessweek. They represent a special type of working woman—the kind who doesn’t just punch a clock for a paycheck, but derives self-worth and pleasure from wielding professional power.

At the same time that the gender gap is narrowing, the gulf is widening among women themselves. While blockbuster books such as Lean In focus only on women in high pressure jobs, in reality there are four women in traditionally female roles for every Sheryl Sandberg. In this revealing and deeply intelligent book, Alison Wolf examines why more educated women work longer hours, why having children early is a good idea, and how feminism created a less equal world. Her ideas are sure to provoke and surprise, as she challenges much of what the liberal and conservative media consider to be women’s best interests.

My Comments:
I haven't finished this book, and I probably won't; however it is a book with some interesting ideas that I think bear discussion.  In short, Alison Wolf postulates that today's young professional women, those at the top of their fields, have more in common with their male counterparts than they do with their sisters who are in more traditionally female roles.  These top women, she says, earn the same as men, work as much as men,  marry late, if at all, and have pretty much the same  type of sex life as their male counterparts.

I don't know how high up the food chain Ms. Wolf goes to put women in the "high" category.  She speaks of college graduates, but most women I know and know of, even if college graduates, have made career decisions that include making more time for children--and they've paid a career price for it.  Ms. Wolf says that lower income women move in and out of the workforce, taking time off to raise children, working jobs picked for flexibility or otherwise acting differently than men do vis-a-vis work, whereas the high-prestige, high-education women do not.  I have to ask whether these women of whom she speaks got where they are because they are different than other women, or whether they are different because of where they are.  In other words, if you look at a bunch of 18 year old college freshman (so you've already eliminated many of the less intelligent, less educated, less motivated women) and follow them, are you going to find today's women so different from those of twenty years ago?  Everything else I've read (and my personal experience) is that most women with kids want to spend time with them; they don't want jobs that require significant travel, or long hours.  If they can afford it, many want extended time away from work when their kids are young, or they want to work part-time.  While stay at home dads may be more common now than they once were, they still aren't common.  Yes, today's young women are marrying later than my generation, and no, I don't know any lawyers who are single moms, but I know of many female lawyers, both my age and those who are having babies now, who have cut back after becoming moms--and who have paid an economic price for that choice.

In short, an interesting but somewhat long book, and one with which I do not agree.  Grade:  B
Posted by RAnn at 11:30 PM