One month's performance is not enough on which to completely evaluate a new investment; however, it is a good time to look back at what I have, what I have done, what I would do differently and how the investment has performed (especially when compared to what was expected).

As you may recall from past posts, I invested $1,000.  That money was able to be invested on July 10.  Today is August 10.  I invested $500 in brand new notes,  using a variety of criteria I had read in various blog posts, along with some "this looks good to me".  I have notes at varying levels and basically I'm trying to see how this all works.  I took me until the end of last week to get all $500 invested; several of the loans I had picked ended up not being funded and the money was put back in my account to re-invest.  My final result is shown below: 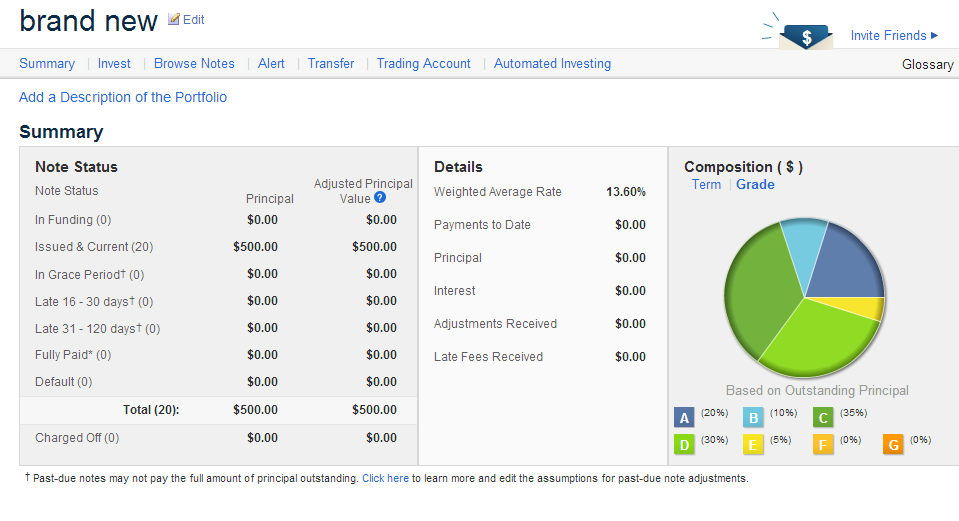 You can click on the picture for a better view, and you'll see that the average weighted interest rate is 13.6%, but that I have loans rated A-E.  At this time I have received no payments and no one has defaulted.  At the end of one month, this $500 has paid me nothing, though interest has accrued.  First payments begin today, and continue through September 6. 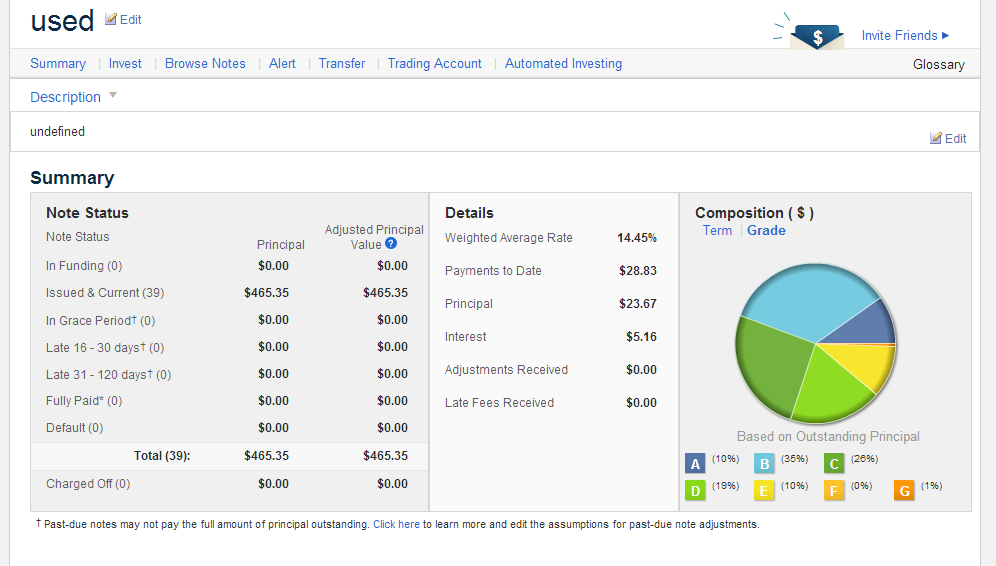 I used the other $500 to buy resale notes.  I bought many of them at a premium--more than the outstanding principal and accrued interest--on the theory that the seller had absorbed the early default risk on the loan and that by the time I bought it, that risk was noticeably less than it was at the origination of the loan.  I also lost $10.16 buying notes that were in grace period (late but not too late) and then loosing my nerve and dumping them before I lost all my money.  This portfolio also has one note I just bought for $22.22 which hasn't made it over from the trading platform yet.  The final reason this portfolio isn't over $500 is because spare cash (right now $0.83) isn't in any portfolio.  Still, you can see that in the last month, this portfolio has paid me $5.16 in interest, and has returned $23.67 of my principal to me.  I've reinvested that money in more notes for this portfolio.  If you ignore my stupid mistake that cost me $10.16 and just look at the other $489.24, then math shows I earned 12.65% annual interest on that money.  However, due to the premium I paid for those notes, I'm in the hole right now--I still have $11.60 to make up before I break even.  On the positive side, I have received payments from all the loans in this portfolio but four, and they aren't due until this week.  So far, no bad payers.

I've continued to read about Lending Club and Peer-to-Peer lending and I decided to invest another $1500 so that I can try some of their automated tools that are available to those whose accounts are over $2500.  If I've caught your interest and you want to invest $5000.00 or more in a new IRA with Lending Club, leave a comment with your contact info and I'll send you an invitation that gives you a $25.00 bonus.
Posted by RAnn at 10:22 PM