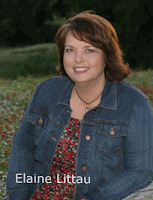 Littau is a life-long resident of Perryton, TX. She met husband, Terry at the Apostolic Faith Bible College in Baxter Springs, Kansas in 1974. They married March 1, 1975 and reside on a small acreage near Perryton where they enjoy spending time with their family and friends. They raised three sons and now have three daughters-in-law and four grandchildren added to their family. They also enjoy visiting with their extended family located in Perryton, Clear Lake, Laverne, and Amarillo.

Author Elaine Littau is a busy woman who by profession is the church secretary for Harvest Time First Assembly of God Church in Perryton. Among other things she has led women’s groups and taught preschool, and was a mentor for the M.O.P.S. (Mothers of Preschoolers) group in her community. She has been active in Toastmasters and enjoys painting, crafts, and playing piano and organ. She was recently appointed to the Campus Education Improvement Committee for Wright Elementary in Perryton. She belongs to Christian Storytellers and Faith Writers writing groups.

“Nan’s Journey” was written over the course of several years. “A salvation message is at the core of the book.” Littau says. “If it weren’t for the Lord, I wouldn’t have been able to do this. I truly enjoy meeting new people.”

Littau is currently working on two other books that are continuations of “Nan’s Journey.” Book signings and speaking engagements are currently set up for venues in Texas, Oklahoma, Kansas, Colorado, and Oregon.

It was late. The moon had risen and the night symphony was in full force. Crickets chirped at their rivals, the frogs, and dominated the night chorus. Only one sound in the forest was foreign—a whimper from under the ferns. At the base of the largest pine in the woods was a small form crying, moaning, and whimpering. Black hair, matted and dirty, hung in long ropes down the front of the tiny girl. She had been in this spot for hours. At least that is what it felt like to her. Stretching, she cried out in pain. The blood-covered welts burst open to bleed again. Her back was wet with blood, and her dress was torn and useless.

Why had she dared to speak to the woman that she was obliged to call mother in that way? She knew that talking was not allowed from children before chores were finished. The accusations being made by “Ma” were totally false and she could not let Elmer take the blame for something she herself had forgotten to do. She shut her eyes tight against the memory, but it intruded anyway.


She had just gotten up to take the water off the stove to make up dishwater for the supper dishes. Ma had stepped outside the room to turn down her bed and prepare for sleep. When she reappeared in the kitchen, she realized that the wood supply next to the stove was low. Elmer was standing next to the table gathering the plates for washing. “Elmer, where is the wood you were supposed to bring up to the house?” Before he could answer, a hand had slapped him across his face. Getting back onto his feet and standing as tall as a five year old can stand, he looked her in the eye and said, “Ma, I was sick today, ‘member?”

“So, Elmer, you’re going to play up that headache trick again. Nan, didn’t your good for nothing Mama teach you people how to work, or are you just lazy?”

“Our Mama was good! Don’t you say mean things about her!” Nan yelled as her heart raced at the assault against her real Mama’s character.

“What about it, Elmer, are you like your weakling Mama or what?” Elmer’s eyes became very large and filled with tears. He could barely remember his real Mama, but when he did, he remembered soft kisses and sweet singing and a beautiful face. “I’m sorry; I’ll get the wood now.”

“No, Elmer, don’t. I promised you I’d do it today when your head was hurting, but I forgot. I’ll get it after I do these dishes.”

“Listen here, Nan, I’m the boss around here and Elmer will do what I say, when I say, and you will respect me.”

“Well, I guess you will be making a trip to the wood shed…with me!” Ma had grabbed her by the arm and jerked her along behind the shed. The strap was hanging there, waiting. Whippings were becoming more and more frequent. After Ma’s husband left, they had taken on a more cruel form. The last whipping was more like a beating. It took days for the marks to scab over and heal. Little Elmer had come in that night and brought some horse medicine from the barn and applied it to the oozing marks.

The next afternoon when the schoolteacher came over, Ma had already formulated a story. “Mrs. Dewey, we missed Nan and Elmer today at school. Are they sick?” Ma lied the first time in her life and said, “Well Miss Sergeant, since Mr. Dewey is going to be gone for another four weeks, I need more help around here to get things done. I’m holding the kids out until he gets back.” Week after week went by, and Mr. Dewey still hadn’t come home. Everyday Ma grew more and more angry. It became more and more impossible to please her. When she began hitting Elmer, it was too much. Nan had to do something— right or wrong; things couldn’t stay the way they were.

The coolness of the earth had settled into Nan’s bones. She stood silently for a minute and carefully crept up to the farmhouse. As she opened the door, she saw that Elmer was in the pallet at the foot of the stove next to her bedroll. Ma was asleep in her room. The door held open with a rock. Slowly she began peeling off the dress and the dried blood stuck to it. She reached for the old shirt she normally wore over her wounds and under her dress. She had washed it today. It had bloodstains on it, but it would keep her from ruining another dress. She retrieved the old work dress that she wore when chores were messier than usual; it was the only one left. She put it on swiftly and shook Elmer awake with her hand over his mouth. “Baby, we must leave. Do you understand? Stay quiet and I will get some stuff to take with us.”


She found large old handkerchief and began looking for food supplies. There was one sourdough biscuit and about a cup of cold brown beans. She located her tin cup and another rag. She would probably need that. Three matches were in the cup on the stove. She would just take two. Suddenly she heard a sound from Ma’s room. A scampering sound… just a rat. Ma turned over. Her breathing became deep and regular. For once Nan wished that Ma snored. She tied the handkerchief in a knot over the meager food supplies, grabbed their bedrolls, and slowly opened the door.

“Come on, Elmer. Can you carry this food? I’ll get your bedding. That’s a good boy. We must hurry!”

The cold air bit at their faces, but they walked bravely on.

“Elmer, we must go tonight so we can get as far away as we can before Ma wakes up and sees that we are gone.”

For the next half hour the pair walked in silence through the familiar woods past the graves on the hill. In one, a mother dearly loved, in another, an infant who had died the same day as his mother, and the third, a father that only Nan had memory of. Elmer was only two years old when Pa died in the logging accident. Nan snapped out of her reverie and urged Elmer on. Molasses, Pa’s good old workhorse, stood in the pasture. He skidded the logs Pa cut with his axe. His legs hadn’t healed quite right, but Mama hadn’t let Mr. Dewey kill him because he was all she had left of the husband of her youth. Molasses was a faithful friend to Nan and Elmer. He stood there and waited for them to mount him.

“Molasses, take us to…” Nan realized then that they had nowhere to go. Mrs. Dewey had said that they were ungrateful little imps who didn’t realize she and Mr. Dewey were taking care of them out of kindness, and they could easily be put into an orphanage. Nan didn’t know anything about orphanages except what Mrs. Dewey…uh, Ma had told her. “Molasses, just take us out of here.”
Posted by RAnn at 3:48 AM