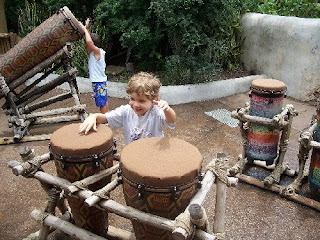 My youngest plays the drums at Animal Kingdom.


Last week we visited Walt Disney World and had a great time. We spent the day Saturday making the ten hour drive, but thanks to the modern technology of portable DVD players which run on car batteries, it wasn't a bad trip. We stayed at Caribe Cove, which is a relatively new vacation condo resort complex. We had a two bedroom apartment for about what we would have spent on a small hotel room had we chosen to stay on Disney property. We were only about six miles away and frankly, spending a week in a small hotel room with my kids is not my idea of a good vacation.
Sunday we headed for Animal Kingdom. For those of you not familiar with Walt Disney World, it consists of four major amusement parks and several smaller attractions including water parks, golf, mini-golf, and more. Animal Kingdom is the newest major park, and the one that takes the least time to "do". Actually a lot of it is really nothing but a zoo. I like zoos but we have one here and it doesn't cost me $50 plus parking to walk in the door. However, Animal Kingdom does have some neat rides, includng a couple of roller coasters and a raft ride (which unfortunately was broken when we tried to ride). We left early to make it to mass at Our Lady Queen of the Universe. OLQU is a shrine church, and is one of the biggest churches in which I've ever been. It is not a parish church, it was built to serve tourists and we jokingly call it OLQ of the Amusment parks. Like the Orlando amusment parks it has someone in uniform directing you to the large parking lot. Like the parks, it has large, well manicured grounds. There is a gift shop. If you are familiar with Disney attractions, you know that some start with a "pre-show" where they herd you into an area and give you a show before the show, partly to entertain you and partly to efficiently move you where you need to be so that when the show starts, everyone is there. OLQU does mass the same way. There is a standard entrance procession and hymn. Then the celebrant asks everyone to sit down and he gives a commerical for the shrine while the latecomers straggle in. Then he has everyone rise and mass continues as normal.

Monday we visited Epcot. I like Epcot, but my son didn't. He isn't into fast rides or anything that seems scary. He also didn't want anything educational. So much for Epcot. However, from the point of view of my youngest, Epcot was great because that's where she met Beauty. 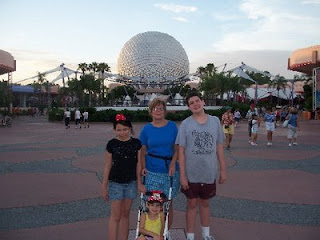 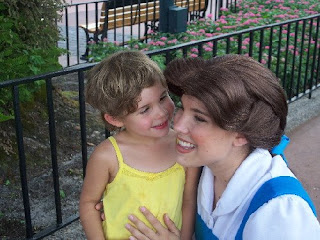 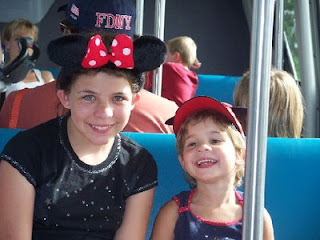 Thursday we visited Magic Kingdom which everyone enjoyed. We subscribe to the "get there early and ride the big rides first" school of amusement park touring, so there wasn't much time for sightseeing. About the time we were ready to slow down and do the non-big stuff, it started to pour.
Friday we started at Typhoon Lagoon. We left at lunchtime and went back to the condo, where the little one dropped of exhaustion. While she napped my husband and the two big kids went to Disney Quest. We then returned to Magic Kingdom for the evening, and the little one got to enjoy some playgrounds and playing in Minnie's House. We stayed for fireworks, but unfortunately ended up in a massive traffic jam as we headed back to the condo. The last picture is of my litte one in Minnie's house. 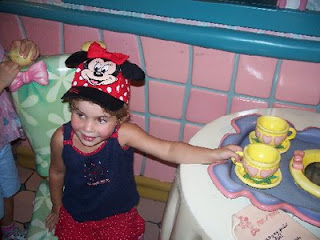