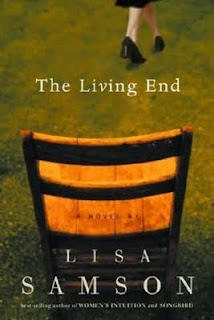 I'm fortunate that I've never experienced heart-rendering grief, the kind that the books say make you feel like you've been torn in two. I grieved when I lost my mother, and to a lesser extent when I lost my grandparents, but the reality is that we know it is likely we'll lose those people; I wasn't living with them or seeing them daily when they died, and the fact of the matter is, my life is little changed by their death. I'm sure that losing my husband will be a different story. The Living End

is the story of a woman who lost her husband.
Pearly Laurel was a college student, who planned on being a photo-journalist, when she met Joey, a graduate student. It was the 1960's and he was a "Jesus Freak" participating in some outdoor activity, playing his guitar. She photographed him, he noticed her, and three months later they were married. She never became a photo-journalist, putting aside her dreams to work at a State Farm office to put him through graduate school. He got a doctorate and became headmaster of a school for poor children who needed a leg up. They were never able to have children, and never chose to adopt; rather they focused their life on the school. Then one day Joey had a stroke and, a few days later, was dead. Right before his stroke, Joey showed Pearly a list of things he wanted to do while he was still alive. She sets out to do them, with the idea that when she finishes, there will be no reason to continue living, so she will commit suicide.
We follow Pearly as she learns to play the guitar, watches whales, visits South America and more, but this isn't a travelogue; rather it is the story of a grief that is too strong, and, eventually the story of a conversion to God. You see, though Joey loved Jesus, and she loved Joey--so much that she gave up most of her own goals and activities to be part of his--she refused to accept his faith. After his death she reads his journals, which are very much reflections of his faith, and though them and through people who come into her life, she comes to know Christ and believe.
Through most of the book I'd say I loved it. I've told you before that I love Samson's writing style, and this book reinforced that. However, I found the ending unrealistic, almost forced. Samson might say that she was trying to show that the grace of God can save us, but I found the situation to be improbable and the resolution to be as well. Pearly makes a very bad decision and then is saved from the consequences of it because of an unexpected event.
The book is Christian fiction. While you don't have to share Samson's beliefs to enjoy the book, by the end of the book it has clearly become a conversion story rather than a story of grief. Joey's journal entries, which are read frequently throughout the book, are about his faith, his reflections on Scripture, as well as his love for her and dismay that she doesn't share his faith. Pearly's conversion isn't an "aha!" moment but a slow awakening to the love of God in her life.
I wish Samson had come up with a different ending, but in general I enjoyed the book and recommend it.
Posted by RAnn at 10:15 AM