My Review: The Church Ladies 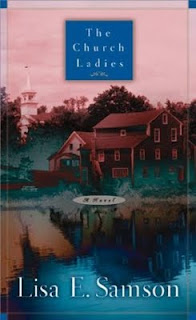 So, what's a woman supposed to do when she has a stack of review books, several stacks of mooched books, swapped books or books from the giveaway box at work? Why, go to the library and get more books, of course. (Honest, the only reason I was at the library is that the weather was bad and my little one wanted to go somewhere)... I enjoyed Lisa Samson's The Passion of Mary Margaret, so I decided to try some of her other books. I'm glad I did.
The Church Ladies

is the story of Penelope (Poppy) Fraser. Poppy is the mom of two college-aged kids and an almost seven year old. He husband had a mid-life crisis and quit his high-powered high-paying job to attend the seminary and become a Presbyterian minister. They move from the Baltimore area to a small town where her cousin (who is married to her best friend) is pastor of another church. Poppy has a major sin in her not-to-distant past and hasn't forgiven herself. She also doesn't think she wants to stay married, and thinks about when she can leave, and how.
An older woman, the widow of a minister, befriends her and the two begin to pray together. They gather other minister's wives into their group and they pray for and support each other. There is a tragedy. Church people act in un-Christian manners, Poppy learns to accept the love of God and to give that love to others.
I enjoyed this book, and if you like well-written books with religious themes, I think you'll like this one too. Samson uses flashbacks to the time of sin, but they are in italics which makes them easy to follow. I wouldn't call the book preachy,but rather I'd say it is the story of someone's faith journey. Poppy realizes she needs God's grace, that she can't do it on her own, and also realizes that that Grace is given abundantly, even in tragedy. If there is anything trite about the book it is that out of tragedy, something really good came; however I didn't even think about it in those terms until I was writing this, so I'd say it doesn't exactly hit you over the head. Poppy is a real woman with real faults, real doubts and real love.
I like Samson's writing style and use of language. That's something I rarely say--most decent writing, to me, fades into the background, it is a medium, nothing more. A few authors impress me with the way they use language, and Samson is one.
In short, if you are a fan of faith-based fiction, I think you'll like this one.
To order from Amazon: The Church Ladies