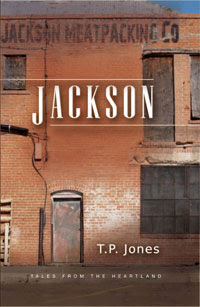 About the book:
The Jackson Packing Company is in trouble. The old-line family-owned firm, once one of the largest in the country, now struggles merely to survive in the fiercely competitive meatpacking industry. When a major marketing agreement is cancelled, bankruptcy is imminent. More than two thousand people will lose their jobs, but the secretive company continues to avoid public scrutiny, the coming calamity known by only a few.

Assigned the job of unmasking the firm, Rachel Brandeis, an ambitious young reporter from the East Coast, spends weeks exhausting every possible resource. When at last she succeeds, however, that only signals the beginning of an attempt to save the company by selling it to its employees. To succeed, decades of animosity between company officials and the union representing most of the workers must be wiped away. At the center of the turmoil stand CEO Skip Peterson, obsessed with saving his family’s firm, and skeptical Union President Homer Budge, reluctant allies deserted by many of their former colleagues as they attempt the near impossible.
About the Author:
T.P. JONES lives in Berkeley, Calif., with his wife, Elisabeth. He was born in Foxborough, Mass., and received his bachelor’s degree from Trinity College. He earned an MFA from the University of Iowa and a master’s in mathematics from the University of Connecticut. Jones worked as a math teacher at a business college before retiring to focus solely on his writing. He is eagerly awaiting the publication of the next “The Loss of Certainty” installment, The Gamble. Visit www.thelossofcertainty.com to learn more.
Giveaway (NEW RULES):
Thanks to the nice folks at Phenix & Phenix, I have three copies of this book to give away. Here is how you enter:
For your first entry, just leave a comment with your email address. For a second entry, Go to the author's website. Read about the characters in this book. Leave a comment telling me which one you'd like to invite to dinner, and tell me why. Make sure you leave an email address with your comment. For a second entry, read the excerpt, and then send me an email at ruthjoec@gmail.com telling me the name of the publisher of the Tribune. For a third entry (you have to do two and three first) leave a comment with the name of your favorite city in the mid-west. Blog about this contest for an extra entry and leave me a comment with a link to your post. Good luck! Contest ends November 20. US and Canada only, P.O. Boxes are ok.
Posted by RAnn at 8:44 PM